To all those pundits who have wrung their hands over Barack Obama's potential general election weaknesses, take heart -- the Senator has heard you.

After moving past the magic number of 2,118 Democratic delegates this evening and addressing the nation's most powerful pro-Israel lobbying organization on Wednesday morning, Obama will head to Virginia on Thursday -- right smack in the heart of Appalachia, where he is often thought to be toast because of his outsized losses to Senator Clinton in some of the region's primaries.

While not all of Virginia is properly inside Appalachia, the cities Obama will visit -- including Bristol, Abingdon and Castlewood -- are all nestled within western Virginia, close to the Tennessee border.

Providing those voters with some face time will perhaps go some way toward satisfying commentators who wonder whether Obama can "connect" with the region, but for what it's worth, it isn't as though Obama is headed to Virginia to staunch any bleeding. The Pollster.com best-fit line of polls over time has shown Obama steadily closing on Sen. John McCain in the state. 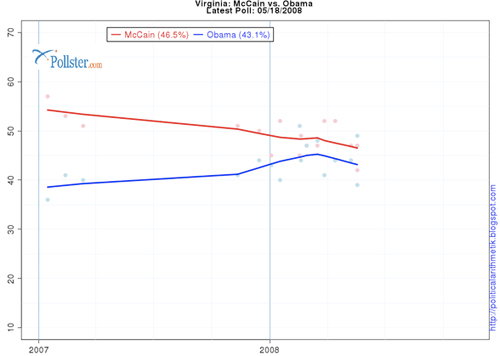