In the wake of the flap that followed the New Yorker's intended satirical cover art last week, a shock anti-Obama t-shirt has made news. The shirt raises questions about whether the provocative message it bears is ironic or just plain ugly. The designer makes no bones, however, about his intent. 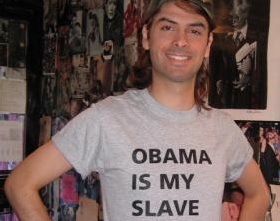 Apollo Braun is selling the shirt emblazoned with the words "Obama Is My Slave" from his Manhattan boutique. The shirt was designed by Braun.

According to blogsite livesteez, Braun claims the shirt does not reflect his views but those of "ordinary WASPS."

"For a lot of people, when they see Obama, they see a slave. People think America is not ready for a black President," he said.

Braun says he believes Obama is Muslim and that Obama also "reminds [him] of Adolf Hitler." "I can't stand Obama," says Braun, although he adds that none of his dislike for the candidate has anything to do with ethnicity.

Braun and his shirt made news when graduate student Nathanaeli Nassimi bought one of the $69 "slave" shirts and was wearing it as she walked through Union Square last week. Four African-American teenage girls took notice . According to Metro, the girls cursed at Nassimi about the shirt, shoved her, pulled out her earphones and spit in her face.

Nassimi has now decided to sue Braun. Braun's lawyer assures him that he has nothing to worry about, that the First Amendment protects his right to make the shirt and Nassimi's right to wear it.

Braun has designed and sold other anti-Obama shirts. The slogans he has used on those shirts have included "Jews Against Obama" "Obama = Hitler" and "Who Killed Obama?"

Never Settle Again: Living A Life With No Regrets
by Earnest Harris