President Barack Obama spoke on the situation in Ukraine on Friday, saying "we are now deeply concerned" about recent events.

Obama said any military movements taken by Russia inside of Ukraine would be "deeply destabilizing."

"The Ukrainian people deserve the opportunity to determine their own future," Obama said.

Obama said the United States will stand with the international community, warning Russia "there will be costs" for any military intervention in Ukraine.

Below, more from the AP:

WASHINGTON (AP) — U.S. officials said Friday that President Barack Obama may scrap plans to attend an international summit in Russia this summer and could also halt discussions on deepening trade ties with Moscow, raising specific possible consequences if Russia should intervene in Ukraine. Obama himself bluntly warned of unspecified "costs" for Russia.

"Any violation of Ukraine's sovereignty and territorial integrity would be deeply destabilizing," Obama declared. Such action by Russia would represent a "profound interference" in matters that must be decided by the Ukrainian people, he said.

While the president spoke only of "reports" of military movements inside Ukraine, the officials said the U.S does believe that Russia is intervening.

Separately, Defense Secretary Chuck Hagel said he would not address specific U.S. options, "but this could be a very dangerous situation if this continues in a provocative way." Asked about options in a CBS News interview, he said that "we're trying to deal with a diplomatic focus, that's the appropriate, responsible approach."

As Obama prepared to speak late Friday, a spokesman for the Ukrainian border service said eight Russian transport planes had landed with unknown cargo in Crimea. Serhiy Astakhov told The Associated Press that the Il-76 planes arrived unexpectedly and were given permission to land, one after the other, at Gvardeiskoye air base.

In Washington, it was unclear whether the administration's threats to pull trade talks or cancel presidential travel might have any impact on Russia's calculations. Obama canceled a bilateral meeting with President Vladimir Putin last year after Russia granted asylum to National Security Agency leaker Edward Snowden, though Obama still attended a separate international meeting in Russia.

Putin is scheduled to host the Group of Eight economic summit in June in Sochi, the site of the recently completed Winter Olympics. The U.S. is in discussions about the summit with European partners and it is difficult to see how some of those leaders would attend the summit if Russia has forces in Crimea, according to the administration officials. They were not authorized to discuss the situation by name and spoke only on condition of anonymity.

The administration's warning that trade talks could be halted came as Russian officials were in Washington for economic discussions with Obama advisers.

For the U.S., levying punishments on Russia is complicated by the myriad of issues on which the White House needs Moscow's help. Among them: ending the bloodshed in Syria, negotiating a nuclear agreement with Iran, and transporting U.S. military troops and equipment out of Afghanistan through Russian supply routes.

At the White House, a somber Obama decried the situation in Ukraine and warned about deeper outside intervention.

"Just days after the world came to Russia for the Olympic Games, that would invite the condemnation of nations around the world," he said. "The United States will stand with the international community in affirming that there will be costs for any military intervention in Ukraine."

Political turmoil in Ukraine has pushed President Viktor Yanukovych from office. Yanukovych held a news conference in southern Russia Friday in which he said he was not asking Moscow for military assistance and called military action "unacceptable."

In his appearance before reporters, however, Yanukovych, who still regards himself the president, also vowed to "keep fighting for the future of Ukraine" and blamed the U.S. and the West for encouraging the rebellion that forced him to flee last weekend.

Any Russian military incursion in Crimea would dramatically raise the stakes in Ukraine, which is at the center of what many see as a tug of war between East and West.

One of the catalysts for massive demonstrations that led to Yanukovych's ouster was his rejection of a partnership agreement with the European Union in favor of historical ties with Moscow. That EU agreement would have paved the way for Ukraine's greater integration with the West, including potential affiliation with NATO, something to which Russia strongly objects for former Warsaw Pact members.

Secretary of State John Kerry and other senior U.S. officials have tried without success to dispel widespread sentiment in Russia that the United States and Europe are trying to pry Ukraine out from under Russian influence. They have insisted repeatedly that Ukraine is not a "zero-sum game" in which one side — Russia or the West — wins and the other loses.

Their argument, though, seems to be falling on deaf ears in Moscow, where Russian officials have been accusing the U.S. and its allies of meddling, fomenting anti-Russia sentiment and actively encouraging Kiev's Western aspirations at the expense of its historical connections.

There was no known contact Friday between Obama and Putin, who last spoke a week ago.

Kerry did call Russian Foreign Minister Sergey for the second time in two days to press the Kremlin to keep its promise to respect Ukraine's sovereignty and territorial integrity. Kerry said he warned Moscow against military moves in Crimea that could further inflame tensions.

Lavrov repeated Russian President Vladimir Putin's pledge to do just that while also pointing out that Russia has broad interests in Ukraine, Kerry said.

The secretary of state said the U.S. was watching to see if Russian activity in Crimea "might be crossing a line in any way." He added that the administration would be "very careful" in making judgments about that.

Kerry reiterated the U.S. view that Russian military intervention in Ukraine following the ouster of the country's Russia-backed leader would run counter to Russia's self-professed opposition to such operations in other countries, such as Libya and Syria.

Underscoring U.S. concerns about Russian intervention are memories of the conflict in Georgia, where Russian troops remain in two disputed enclaves in violation of a 2008 cease-fire.

Amid the heightened tensions over Ukraine, the U.S. this week twice renewed its objections to the Russian military presence in Georgia's breakaway Abkhazia and South Ossetia regions. _ Associated Press writer Darlene Superville contributed to this report.

Obama: Any Violation Of Ukraine's Sovereignty Would Be 'Destabilizing'
Ukraine Demonstrations In The Crimea Region 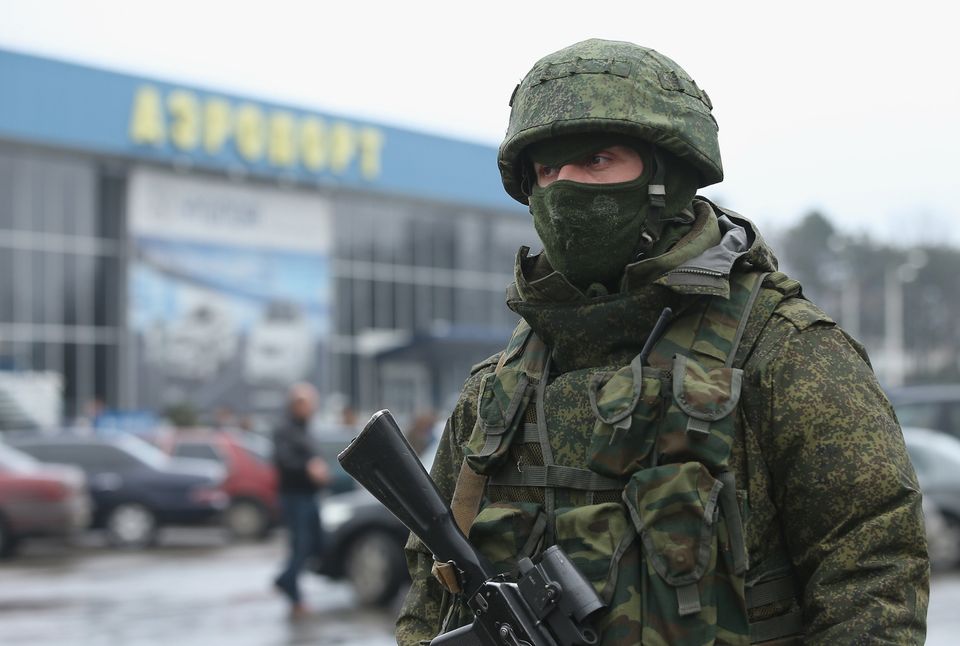 1 / 25
Concerns Grow In Ukraine Over Pro Russian Demonstrations In The Crimea Region
SIMFEROPOL, UKRAINE - FEBRUARY 28: A soldier, one of approximately 20 who were wearing no identifying insignia and declined to say whether they were Russian or Ukrainian, patrols outside the Simferopol International Airport after a pro-Russian crowd had gathered on February 28, 2014 near Simferopol, Ukraine. According to media reports Russian soldiers have occupied the airport at nearby Sevastapol in a move that is raising tensions between Russia and the new Kiev government. Crimea has a majority Russian population and pro-Russian men have occupied government buildings in Simferopol. (Photo by Sean Gallup/Getty Images)
Getty Images