When President Barack Obama arrived in Cuba on Sunday -- the first visit by a sitting U.S. president to the island in nearly 90 years -- members of the Cuban media reacted with a flurry of articles touting the historic trip.

The Cuban press was also careful to reaffirm the government's party line, however, stating that the nation would not give up its national or political identity in exchange for increased ties with the United States.

Cuban President Raúl Castro's government maintains a tight grip on the media. The state runs all of the mainstream media outlets, and has imprisoned independent journalists. Little has changed since Obama and Castro announced a thaw in relations in late 2014, though Cuba’s independent bloggers and journalists find ways to circumvent the restrictions.

The press freedom group Reporters Without Borders wrote an open letter to Obama this week, urging him to make freedom of the press a priority during the trip.

“The Cuban government maintains a complete monopoly on information and will not tolerate any independent voices, ensuring that there is no free media,” the organization said. “Now is the time to make sure all of Cuba’s many voices are heard.”

Here is how the Cuban press has covered Obama’s visit.

In a story published on Sunday, the state-run Cuban News Agency, known as ACN in Spanish, said that Cubans would receive Obama with respect -- although the statement read more like a command than a record of public sentiment:

"Cubans will receive the President of the United States this afternoon in Havana with the hospitality that characterizes it, and with the respect he deserves for being a Head of State."

ACN also carried a statement from the Federation of Cuban Women that welcomed Obama's visit and extolled Cuba as a model of gender equality.

“We know that Mrs. Michelle Obama is carrying out a major initiative called "Let Girls Learn" with the aim of providing access to education to 62 million girls around the world. We offer her our humble experience in this field, since 100 percent of our girls attend school regardless of where they live, the color of their skin, if they have a disability or are hospitalized.”

According to the World Bank, Cuba and the U.S. had the same gender parity index for primary and secondary school enrollment in 2013, the most recent year with that information available.

Granma, the official newspaper of the Communist Party of Cuba, is offering live updates on Obama's whereabouts, and posted images documenting his rainy walk through historic Old Havana on Sunday.

The nation's state-run television station, Cubavision, is also running special coverage of the visit. Ahead of the trip, the station said it was upgrading its digital system and sending out reporters to gather reactions.

On Monday, in anticipation of Obama and Castro's face-to-face meeting, the station aired footage of previous meetings between the two leaders.

Granma's main Spanish edition published a short, glowing biography of Obama on Saturday that praised his dedication to serving others and celebrated his record as an Illinois senator. It did not, however, mention his record as U.S. president.

ACN ran an English translation of the same backgrounder on Sunday.

Hope For The Future

Prensa Latina, another state-run news agency, ran a number of articles on Obama's trip and the future possibilities of U.S.-Cuban relations, including a story about Cubans’ hopes and expectations for the historic visit.

Among those interviewed was the director of the National Museum of Natural History of Cuba, Esther Pérez, who reportedly discussed the possibility of more scientific exchanges with U.S. institutions and was quoted expressing a desire for better relations:

"I hope the visit of Obama is an important step in the long way forward to the complete normalization of bilateral relations, for the benefit of both peoples and peace in the region."

Prensa Latina also reported that Frank Camilo Morejón, a member of the Cuban national baseball team, said he hoped the visit would bring an end to decades-long U.S. embargo of Cuba:

"I also hope this to be a door to the lifting of the U.S. economic blockade imposed for more than half a century on Cuba and it expands exchange in the sectors of health, education, culture and all areas of society, including sports."

But despite the complimentary biographies and minute-to-minute reports, Cuban outlets made sure to reaffirm the Communist Party line and remind their readers of the remaining strains in the U.S.-Cuba relationship.

Granma stressed in an editorial that Cuba wouldn’t compromise its socialist system for a better relationship with the U.S.

“Coexisting does not mean having to give up ideas, which in the case of Cuba are related to its Socialist system, its history and its culture, the core of its Revolution.”

In its English edition, Granma praised the U.S. for lifting some trade and travel sanctions ahead of the visit, but warned that the changes may not go very far, considering the continued trade embargo.

“While the announced measures are another step toward a different relationship, the full extent of these amendments is yet to be seen. The three previous packages of modifications approved by the Obama administration have had limited impact.”

“The U.S. economic, commercial and financial blockade imposed on Cuba for more than five decades remains the main obstacle to normalizing relations between the two nations.”

It also carried a statement by the Cuban Workers' Federation union, which welcomed Obama's visit but said that Cuban workers were proud of their history and expected the U.S. to respect the island's sovereignty.

“Cuban workers are proud of our tradition of struggle against exploitation and for social justice that valuable union leaders such as Jesús Menéndez, who fought for the interests of sugar workers and the Cuban nation against U.S. monopolies and representatives of the government of that country, have defended at the cost of their own lives ... We will never renounce the unity achieved by our workers, or our revolutionary, anti-imperialist and social justice ideals, nor our spirit of solidarity with the world’s just causes. We hope that the process initiated between the two countries moves ahead on an equal basis, without conditions and with respect for our independence and sovereignty.”

Before Obama's arrival, ACN covered Cuban Foreign Minister Bruno Rodríguez’s press conference on Friday. Rodríguez said the U.S. embargo is the main obstacle hindering Cuba's development and stated that it must be lifted to fully normalize relations between the countries.

Rodríguez also said the visit represented an opportunity to continue building a new U.S.-Cuba relationship, while emphasizing that “Cuba will not give up even one of its principles.” 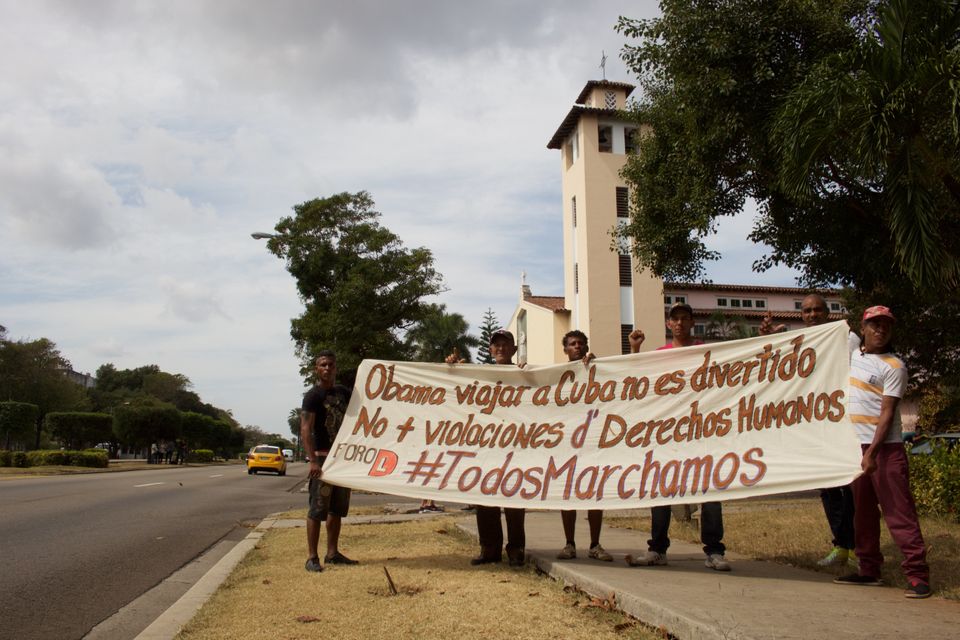