Republicans and self-styled "Christians" are agog over what Andrea Mitchell of NBC characterized as the "crisp, immediate, forceful response" John McCain gave to Rick Warren's question about evil during the forum at the Saddleback Church. They dismiss Barack Obama's "more nuanced approach." 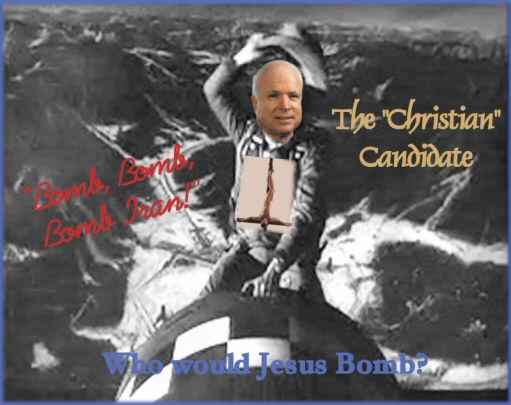 "Sen. McCain was crisp, decisive, knew what he was about, knew his values," Gov. Tim Pawlenty (R, Minn.), who is a favorite of the "Christian Right," proclaimed on Face the Nation on Sunday. "Sen. Obama, I thought, was hesitant, halting, and quite wandering in his answers."

Pastor Rick asked the following question of both candidates: "Does evil exist? And if it does, do we ignore it? Do we negotiate with it? Do we contain it? Do we defeat it?"

Here is a portion of Obama's reasoned, considered, "nuanced" answer:

"Evil does exist. I mean, I think we see evil all the time. We see evil in Darfur. We see evil, sadly, on the streets of our cities. . . . It has to be confronted squarely . . . . I think [it] is very important for to us have some humility in how we approach the issue of confronting evil, because a lot of evil's been perpetrated based on the claim that we were trying to confront evil. . . . in the name of good. . . . [J]ust because we think that our intentions are good, doesn't always mean that we're going to be doing good."

One can't get much more "crisp" and "decisive" than that! And it sure sounds like the proper Christian answer to what to do about evil, doesn't it?

Sen. McCain's values, which he knows so well, are based on that revered commandment from Jesus, "Shoot first and ask questions later."

Oops. That's where Jesus offers an answer to Pastor Warren's question on what to do about evil that is nearly opposite to Sen. McCain's:

"He who is slow to anger has great understanding, but he who has a hasty temper exalts folly." (Prov. 14:29)

"A hot-tempered man stirs up strife, but he who is slow to anger quiets contention." (Prov. 15:18)

And, from the Christian New Testament's Letter of James: "Let every man be quick to hear, slow to speak, slow to anger, for the anger of man does not work the righteousness of God" (James 1:19-20)

Three years ago, when President Bush was, as he is now and was prior to the 9-11 attacks, on his long August vacation in Crawford, Texas, Cindy Sheehan and other mothers who lost sons in Iraq War staged a protest near his home. One of their signs read: "Who would Jesus bomb?"

John McCain gave a memorable version of his standard answer to that question when he was asked in 2007 about his Iranian policy. He sang, to the tune of "Barbara Ann": "Bomb, bomb, bomb Iran."

In my new book, Grand Theft Jesus, I offer a name for these people who stand Jesus on his head. The person who had the greatest impact in overturning the teachings of Jesus lived 1700 years ago. Constantine won the Battle of Milvan Bridge in AD 312 after a dream led him to have Christian symbols painted on the shields of his soldiers.

The Jesus Thieves who have committed identity theft against the Prince of Peace should be called Constantinians.

In Orange County on Saturday (as he has on many other occasions), John McCain showed himself to be a Constantinian, not a Christian. But this will do him little harm with the Republican "base" of the "Christian Right," because they, too, are Constantinians who shout "JESUS!" at the top of their lungs but ignore his teachings.

The choice in November is Obama or "Oh, Bomb 'Em."

Constantinians will vote for the latter, but Christians who are actual Jesus Followers may prefer nuance to crisp, angry decisiveness.