More fake news can be found every day on The Political Garbage Chute.

WASHINGTON, D.C. -- The days in President Barack Hussein Obama's (D-Kenya) presidency are dwindling, and aides close to the first black president are saying he's been thinking long and hard about what he'll do once he leaves the White House. Some staffers this week told media outlets that one idea Obama has is to continue one of his most ambitious efforts as president but in the private sector. At an early morning press conference Wednesday morning, Obama made those intentions known to the public. 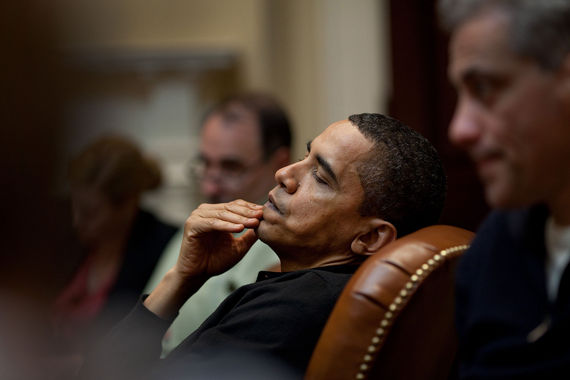 "You know," Obama told reporters in the White House press briefing room, "once you get a taste for disarming the public; it's really hard to quit."

Obama told the media he is mulling over whether or not he should become a "private sector gun grabber" once he leaves and alleged billionaire Donald J. Trump is sworn-in next January. The move, he said, would fit "right in line" with his "obvious and apparent" presidential goals. He said that "every right-winger and Sean Hannity viewer knows" he's been out to take away everyone's guns as president, and at first he was "deeply saddened" by the prospect of not being able to do so anymore.

"What's an anti-American puppet of George Soros supposed to do," Obama asked, "if he can't destroy America from within or at the very least confiscate every good, God-fearing, ammo-hoarding patriot's weapons cache?"

Feeling a heavy malaise, Obama says he confided in outgoing Vice President Joe Biden that he was feeling "a lot of ennui" over not being able to confiscate Americans' guns. That's when Biden told him to consider making a transition to the private sector. After thinking about it over a long weekend golfing, which one right-wing news site estimated cost taxpayers approximate $2.3 trillion dollars a hole, Obama decided Biden was "dead on" and he's begun putting together a non-government organization, or NGO, to do just that.

"I've seen what being a gun grabbing Kenyan socialist Sharia lover is like in the public sector," Obama said, "and now I want to see if I can bring those same traits to the private sector."

Obama's group will be called Organizing For Confiscation, and it will be lead by Obama, George Soros, Hillary Clinton, Facebook's CEO Mark Zuckerberg, former NBA player Mookie Blaylock, Beelzebub, and the ghost of Saul Alinsky. It will focus first, Obama said, on training Obama in the ways of the ninja. That way, the president said, he can "more easily sneak into people's homes and grab those guns."

"Let's be very clear here," Obama told reporters, "despite my best efforts, I was not successful in confiscating nearly as many guns as I had hoped. Frankly, I don't think I grabbed very many at all. I was just never able to get away with it, but I would have it if weren't for those darned, snooping right-wing conspiracy theorists. OFC will take my mission to disarm America so that the commie invasion can begin and run with it full steam, or I'll hand in my Sharia Socialism card."