WASHINGTON -- President Barack Obama made a "special plea" to the press on Tuesday to give coverage to the winners of the White House Science Fair.

"Pay attention to this. This is important," Obama said during remarks in the East Room, where this year's teenage winners sat all around him. "This doesn't just belong on the back pages of a newspaper. We've got to lift this up and emphasize how important this is and recognize these incredible young people. This is what inspires me and gets me up every day."

Because we don't want to be accused of ignoring the people who could be running the country in the next 30 years, here's a breakdown of the students and their winning projects, which included breakthrough research (dissolvable sugar packets) and new inventions (a portable disaster relief shelter). Obama walked around the White House viewing each of the projects on display and even interacted with one of them, launching a marshmallow out of a compressed air cannon that smashed against the wall in the State Dining Room.

From a White House pool report:

Detroit Students Imagining the Energy Efficient City of the Future. The Paul Robeson/Malcolm X Academy student team from Detroit, Michigan, competed in the Michigan Regional Contest of the National Engineers Week Future City Competition for the second year in a row. Lucas Cain Beal, Jayla Mae Dogan, and Ashley Cassie Thomas, all aged 13, were part of a team that won the Excellence in Engineering Award at the 2012 Michigan Regional Competition focused on designing a city around the theme of "Fuel Your Future: Imagine New Ways to Meet Our Energy Needs and Maintain a Healthy Planet." After being named Best Rookie Team in 2011, the students had to overcome losing their school to a fire. Despite the adversity and having to merge with another school, the students were energized to take on the Future City challenge again, saying "(Future City) helps me make a better city to live in."

Building an Award-Winning Robot and Learning Entrepreneurial Lessons. Morgan Ard, Titus Walker, and Robert Knight, III, 8th grade students at Monroeville Jr. High School in Monroeville, Alabama won high honors at the South BEST robotics competition. BEST teams mimic industry by designing and developing a product and delivering it to market, including a marketing presentation, engineering notebook, trade-show style exhibit booth and robot competition. Through the experience, these middle school students not only learned the innovation and engineering necessary to develop an award-winning robot, but the marketing and business skills that spark true entrepreneurial spirit.

Student "Making" and Starting Small Business to Sell his Invention. Fourteen year old Joey Hudy from Phoenix, Arizona is already a Maker Faire veteran. He invented an Extreme Marshmallow Cannon and an LED Cube Microcontroller Shield, which he has exhibited at Maker Faires in New York, San Francisco, and Detroit. He received 2 Editors Choice Awards from Maker Faire, and has started a small business selling the microcontroller (Arduino) shield kits on several websites. As the World's Largest Do-It-Yourself Festival, Maker Faire is the premier event for grassroots American innovation.

Student Designing a Robot to Connect Senior Citizens with their Families. Concerned with the loneliness of seniors at his grandmother's senior living center, fourteen-year old Salesianum High School (Wilmington, DE) student Benjamin Hylak of West Grove, Pennsylvania, built an interactive robot, which qualified him as a BROADCOM Masters 2011 Finalist. His telepresence robot which moves around the center and allows seniors to connect via Skype with their family and friends when they are unable to visit in person, earned him second place in the BROADCOM Masters Engineering Category.

Developing a Portable Disaster Relief Shelter. Jessica D'Esposito, Colton Newton and Anna Woolery from Petersburg, Indiana are representing the Pike Central High School InvenTeam, one of fifteen schools selected nationwide. They won a grant from the Lemelson-MIT Program to develop a lightweight, portable disaster relief shelter, designed to be complete with a water purification system and a renewable energy source to power an LED light, which could be used after disasters such as hurricanes, earthquakes, floods, or tornadoes to house people who have been displaced.

Young Women Rocketing to Nationals. Janet Nieto and Ana Karen of Presidio, Texas were members of the Presidio High School Rocketry Team that competed as a National Finalist in the Team America Rocketry Challenge (TARC) in 2009, 2010, and 2011. Gwynelle Condino, a 7th grade student at Lucy Franco Middle School, also of Presidio, Texas, is the leader of her TARC team this year. All three girls have successfully competed in a number of rocketry challenges and have attended the NASA Student Launch Initiative Advanced Rocketry program.

Team of Girl Scouts Seeking Patent on Prosthetic Hand Device Which Enables a Young Girl to Write. A group of middle school-aged Girl Scouts from Ames, Iowa, including Gaby Dempsey, Mackenzie Gewell, and Kate Murray developed a patent-pending prosthetic hand device, winning them the inaugural Global Innovation Award at the FIRST LEGO League competition, beating out nearly 200 other submissions. Their invention was in response to the need of a little old girl in Duluth, Georgia, enabling her to write for the first time although she was born without fingers on her right hand. Their patent pending BOB-1 has earned the girls the Heartland Red Cross Young Heroes Award, scholarships at Iowa State University College of Engineering, recognition on the Floor of the Iowa and the US House of Representatives, and the title of finalists for the 2011 Pioneer Hi-Bred Iowa Women of Innovation Awards. 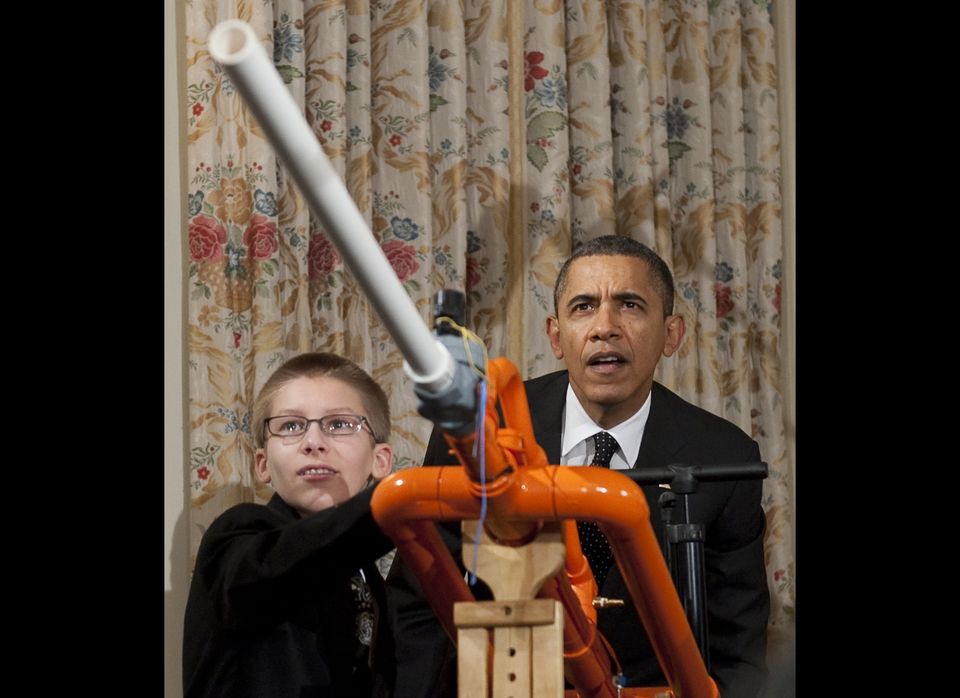