Exit poll data show Obama beating McCain by an overwhelming 57-41 margin among women, and carrying men by four points, 51-47. Obama is positioned to become the first Democrat since Jimmy Carter in 1976 to win break 50 percent of the popular vote, something Bill Clinton failed to do in both 1992 and 1996. 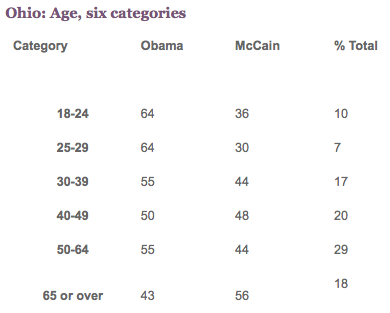 While not among the early network calls, exit polls in Virginia -- which has not voted for a Democratic presidential candidate since 1964 -- showed Obama ahead 54-45; Indiana, once considered a Republican bastion, appeared to be solidly in Obama's camp, with women backing him 55-44 and men split 49-49.

While all white voters over the age of 30 cast majorities for McCain, those under 30 backed Obama by a decisive 57-41 margin.

While Kerry won black voters 88 to 11 while Obama won among blacks 96-3. The exit poll data suggested a significant increase in the black turnout, which rose from 11 percent of the total to 13 percent. These figures may underestimate the increase because they do not include early voting which was very popular among African Americans this year.

McCain received a big initial boost after he picked Sarah Palin as his running mate, but by election day she had become an lead weight. By a margin of 60-38 voters said she was not qualified to be president.

Democrats who had backed Hillary Clinton during the primaries backed Obama 85 to 15.

What has become known as the "marriage gap" played a huge role in the outcome. Obama won single voters by a landslide 66-32, while McCain edged out Obama among married voters, 51-47. Working women were another key source of support for Obama, backing him 61-38, while non-working women were almost evenly divided, 50 for Obama, 48 for McCain.

Young voters under 30 backed Obama by better than two to one, 68-30, compared to a much more modest 54-45 win among this age group for Kerry. 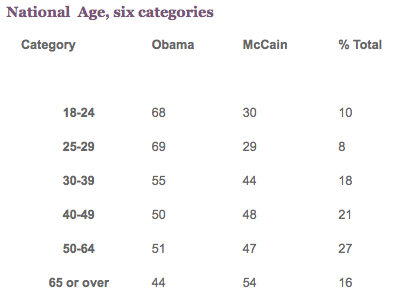 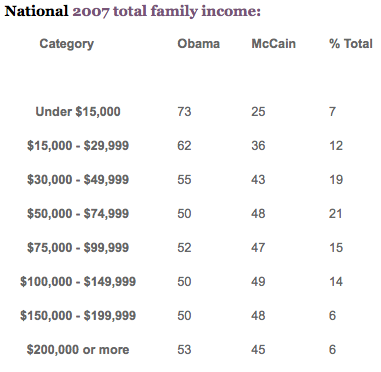 In addition to performing far better among whites, Obama improved significantly on recent Democratic margins among rural voters. In 2004, Kerry lost this constituency 59-40, or 19 points. Obama also lost, but only by 4 points, 47-51.