Yesterday, President Barack Obama traveled to Milwaukee, Wis., to visit Master Lock's plant and give the company props for "bringing 100 manufacturing jobs home from China and putting its Milwaukee plant at capacity and on a path to expanding." The president also used the appearance to push for a litany of proposed measures, most notably a reform of the tax code that would incentivize the creation of jobs at home and end the rewards for outsourcing.

The spirit of Wisconsin labor and the pageantry of union manufacturing hung pretty heavy in the air, it seems, because Politico reporter Donovan Slack, present at the scene, took a quick look around and determined that it was "very clear what side President Obama [was] on here in Wisconsin." How did he make this clear? He stood under a large flag "for the local union, Wisconsin 1848." The problem? There isn't a Wisconsin 1848. 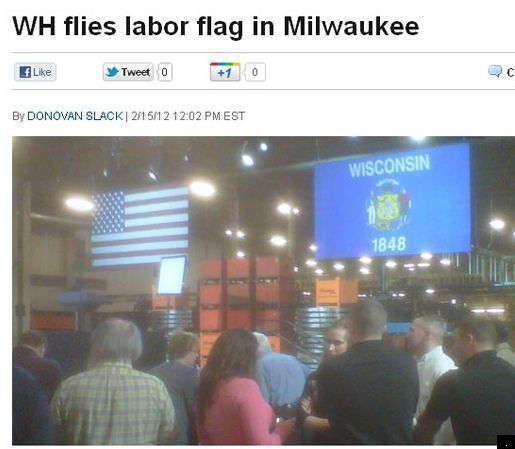 What there is, however, is the Wisconsin state flag, on which is recorded the year of Wisconsin's founding, 1848. Executive Editor Jim VandeiHei, who is from Wisconsin, probably noticed the mistake and freaked, because not long after the post went up, it was taken down, never to be seen again.

Ah, Slack, why you have go make Mike Allen look good like that? Well, for what it's worth, I have made the same mistake of looking at Stuff From Wisconsin and seeing all sorts of union symbolism where none exists. And the Wisconsin state flag has a history of confusing people -- in 1979, a law was enacted to get the words "Wisconsin" and "1848" emblazoned on the flag so that it could be "distinguish[ed]...in some more noticable way."

That said, President Obama was preceded on stage by John Drew of the UAW, and was accompanied by UAW Local 469 President Mike Bink, so Slack's basic thesis still stands, just not under that flag.