The top reason uninsured people didn't enroll in coverage under Obamacare this year is they still don't feel like they can afford health insurance, according to a new survey.

The findings in a report published by the Henry J. Kaiser Family Foundation Tuesday highlight the affordability gap facing some U.S. households, especially those with incomes near or above the income cutoff for tax credits that reduce premiums, or those who simply don't believe health insurance is a good value.

Thirty-six percent of people without health coverage reported they looked for health insurance during the enrollment period that nominally ended March 31, but found the available plans too expensive, according to the Kaiser Family Foundation survey. Just 7 percent said they preferred to pay a tax penalty under the law's individual mandate, rather than purchase an insurance policy. Others said they believed the mandate doesn't apply to them, didn't know about the mandate, or tried and failed to enroll. 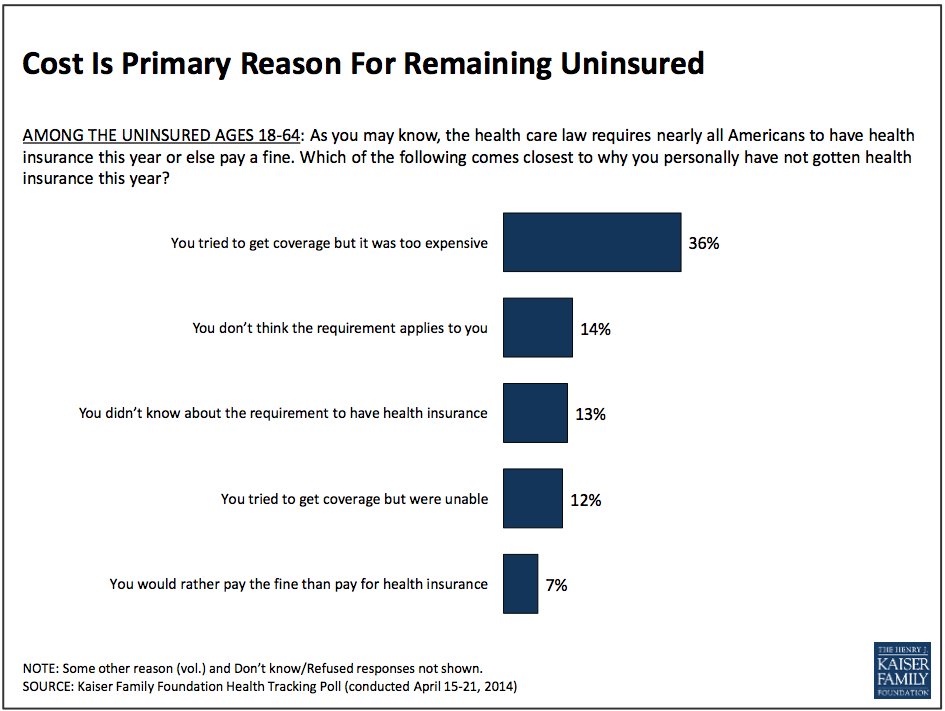 Health insurance remains a costly product and the Affordable Care Act targets its financial assistance to low-income families. Tax credits to defray the cost of coverage aren't available to households that earn more than 400 percent of the federal poverty level, which is $45,960 for a single person. The law also provides subsidies to reduce out-of-pocket costs for those who earn up to 250 percent of poverty, or $28,725 for an individual.

The tax credits provided under the Affordable Care Act are pegged to the price of the second-cheapest "silver" level plan in a person's geographical area, and to household income. The subsidy gets smaller as income increases, so people who earn near 400 percent of poverty receive relatively little help paying for their coverage, and those who make just a little more pay full price.

The average national price for one of these benchmark silver plans is $808 a month for a household of two 40-year-olds with two minor children that earns over 400 percent of poverty, which is $94,200 for a family of four, according to a calculator on the Kaiser Family Foundation website. The same family making exactly 400 percent of poverty would be eligible for a tax credit worth $63 a month.

The vast majority of those enrolling in private insurance under Obamacare are getting help paying for their coverage. As of March 1, 83 percent of enrollees received tax credits for premiums, according to the Department of Health and Human Services.

The Kaiser Family Foundation report includes quotations from some of those surveyed that illustrate the point of view that health insurance is too costly. "What's out there now is just unaffordable," one respondent said. "Because I think food on the table is more important," wrote another. Coloring those views may be a general lack of awareness about the availability of the tax credits, previous surveys have shown.

Although not addressed in the Kaiser Family Foundation poll, the largest affordability gap in health coverage is found in 24 states that didn't adopt the Affordable Care Act's expansion of Medicaid to more poor people after the Supreme Court made it optional for states. Those earning up to 133 percent of poverty, or $15,282 for a single person, were supposed to have access to Medicaid, while tax credits are reserved for those who earn at least poverty wages, which amounts to $11,490 for an individual. That means the poorest residents of those 24 states aren't eligible for any help, so millions are expected to remain uninsured.

The Kaiser Foundation Family poll also shows a majority of Americans continue to disapprove of the Affordable Care Act, with 46 percent having an unfavorable view, compared with 38 percent holding a favorable opinion. These attitudes are closely tied to partisan affiliation, with Republicans being much more likely to disapprove and Democrats more likely to approve. A majority, however, wants Congress to improve the law, compared with more than one-third who would prefer it to be repealed and replaced with an alternative. 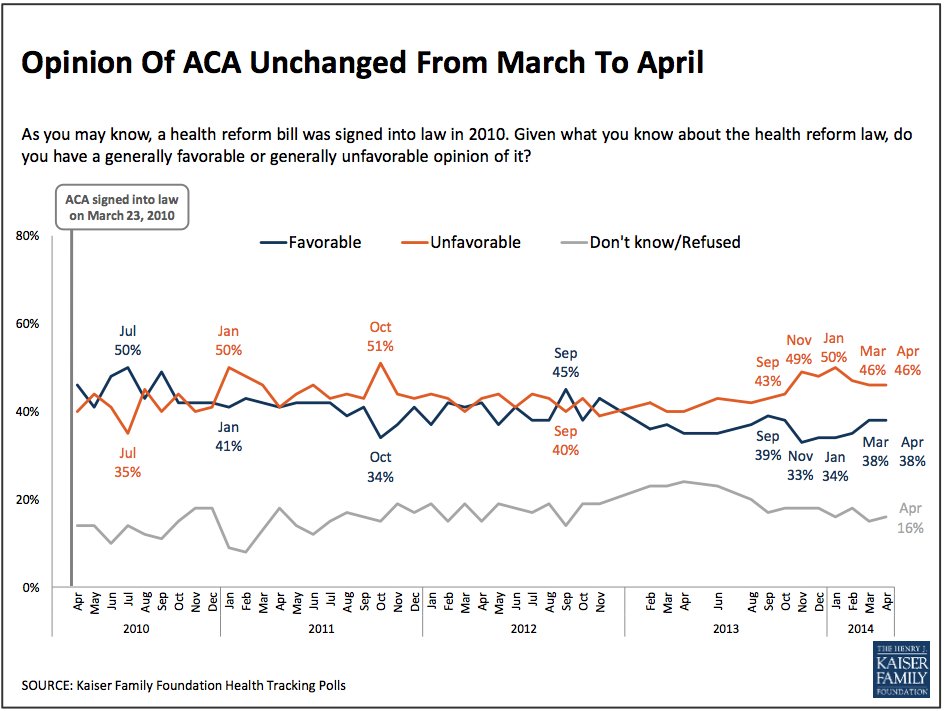 Despite President Barack Obama trumpeting the news this month that private insurance enrollments via the Obamacare exchanges have exceeded 8 million -- or 1 million more than the highest projection from the Congressional Budget Office -- the public doesn't see it that way. Even though more than 40 percent were aware that signups had topped 8 million, nearly six out of 10 said enrollment came in below the federal government's expectation. 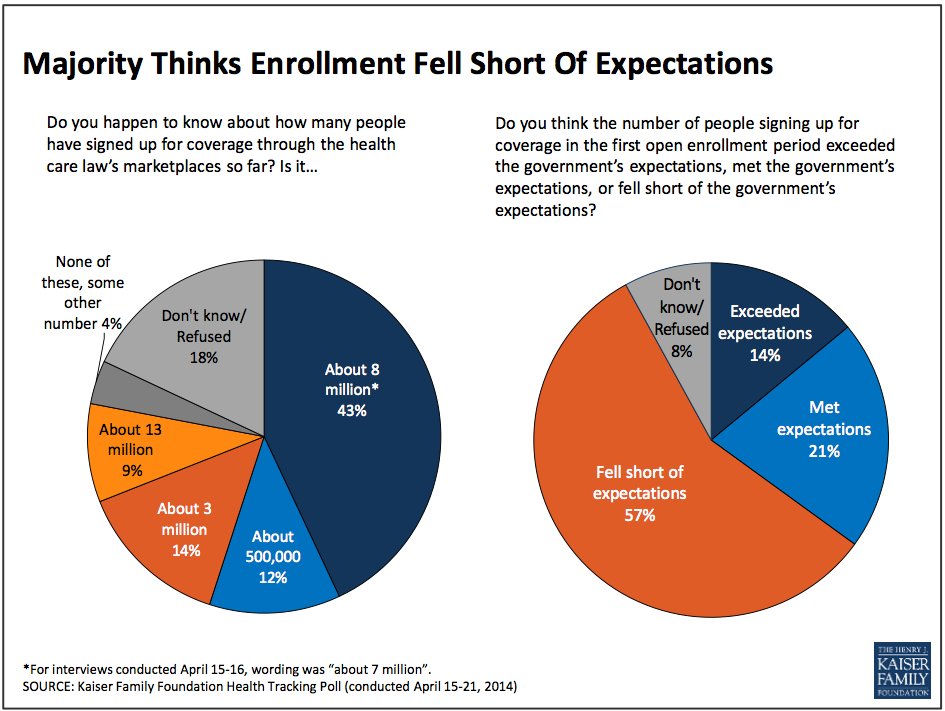