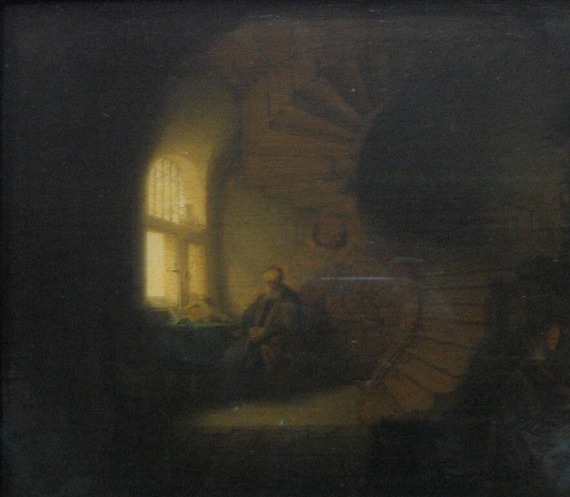 A friend left me a note last night: "My life has been crazy--But with God's help it will get better." I'll come back to my friend. Let me first turn to another quote that drives many Americans crazy and as a result is endangering the life of my friend:

What in these words (and their equivalents) raises such ire in decent folk? Americans on the whole are decent folk and selfishness or other immoral motives therefore do not likely underly their anger. Instead, I believe much of their anger turns on the myth of the self-made man. Let me explain.

Americans are proud of their country as a land of opportunity where all can succeed if they just work hard enough. We all know stories of those who rose from rags to riches. We also of course know our own "hardship" stories of pinching pennies to make it through law school or medical school so that we could be the lawyers or doctors that we are today. We pat ourselves on our backs for our hard work and our sacrifices.

Self-made men. What, though, does that phrase really mean? At first blush, it seems a straightforward reference to those of us who relied on ourselves alone, who didn't whine when we were down, who worked as hard as we needed to work to achieve our goals, as a result achieved them, and thus became self-made men.

However, this "straightforward" definition doesn't withstand even a sliver of real scrutiny. We are all subject to natural and social forces beyond our control. Despite our best efforts, we get sick and we suffer setbacks. If we made it through law school or medical school by pinching pennies and by hard work, those of course aren't the only reasons that we made it through law school or medical school (or whatever other school or task you might wish to substitute). The pinched pennies and hard work numerically pale in comparison to the endless number of other factors involved. In addition to all the things beyond our control that could have gone wrong before we even stepped through the doors of law or medical school, we were lucky enough to keep our health throughout the process. We were lucky enough to have the teachers, parents, and other supporters that we had. We were lucky enough to have the fellow students from whom we also learned. We were lucky enough to have the police, military forces, and fire departments that kept us safe as we studied and whose expenses we therefore did not generally mind paying in the form of taxes. (Isn't it interesting that we generally don't question taxes to protect the health of our structures but go into a tizzy over taxes to protect the health of the persons inside?) We were lucky enough to have the roads that let us get to school and to have the safe food to eat (however cheap) that allowed us to survive. I could go on but the reader should get the drift by now: no one can be a self-made man in this contingent and interrelated world.

In fact, the more we try to speak of ourselves as self-made men, the more we contradict ourselves. Virtuous "self-made men" are understandably proud of their property which they hopefully charitably share with others. Yet property cannot exist without society -- if there are no other people around it makes no sense to speak of property. If there is no one you can ask to get off your land, what could it possibly mean to say that the land is yours? To be a self-made landowner, you therefore require others. But then how can you be a self-made man? As John Dewey puts it, "...[T]he more we emphasize the free right of an individual to his property, the more we emphasize what society has done for him: the avenues it has opened to him for acquiring; the safeguards it has put about him for keeping..." To claim to be a self-made man is thus to renounce the claim.

Once we finally take the myth of the self-made man for what it is, we can begin to be sensible about health care not only for others but for the sake of "self-made men" as well. That's right, I did say for the sake of "self-made men" as well. The "self-made man" also benefits from universal health care. He, too, could lose all his wealth and actually need his health insurance for necessary care. He, too, should not then simply go to the emergency room and stick the rest of us with his bill. He, too, could catch diseases universal health care could have prevented. His stock portfolio, too, is harmed by the lowered productivity of ill workers and by the lowered productivity of those with pre-existing conditions stuck in jobs that do not maximize their potential. Things that hurt our GDP hurt all of us including the "self-made man."

Though the "self-made man" should also embrace universal health care, more humble persons concern me as well. This brings me back to my friend I quoted above. She is a woman who has worked hard all her life and who is under no illusion that she is a "self-made woman." The Republicans who recently took control of North Carolina's state government have refused to join the Medicaid expansion under Obamacare. This hard-working woman is now ineligible for state Medicaid assistance and she does not make enough to qualify for subsidies under Obamacare. The March 31 Obamacare enrollment deadline is looming and in the meantime she has no health care coverage. Though not a "self-made woman" of means, she has done nothing wrong. She goes to church, works hard, takes care of her elderly father, is helping put her daughter through college, and is a blessing to this earth. As the minutes tick down to the end of the month, legal aid workers and kind law students at Wake Forest Law School are trying to provide this hard-working American with access to medical care. They understand that we (including "self-made men") are all in this together. The rest of us should be as clear-headed.