Gallup finds no change in majority disapproval of the Affordable Care Act. CNN finds an uptick in Obama approval since December. And reality finds federal deficits declining, but most Americans haven't quite caught on yet. This is HuffPollster for Tuesday, February 4, 2014.

GALLUP: MAJORITY STILL DISAPPROVES OF ACA - Andrew Dugan: "President Barack Obama defended his signature legislative achievement, the Affordable Care Act, before Congress and the nation last week in his State of the Union address, but public opinion toward the law is little changed since November. Americans are still more likely to disapprove (51%) than approve (41%) of the law. The latest results, from a Gallup poll conducted Jan. 31-Feb. 1, show that even though many provisions of the law are now in effect, Americans' views of the Affordable Care Act, commonly known as 'Obamacare,' still tilt negative. Underpinning this lack of overall support is the fact that most Americans believe the law so far has had no effect (64%) or a harmful effect (19%) on their family. These opinions are broadly consistent with Gallup polling dating back to February 2012, when fewer provisions of the law were in place." [Gallup] 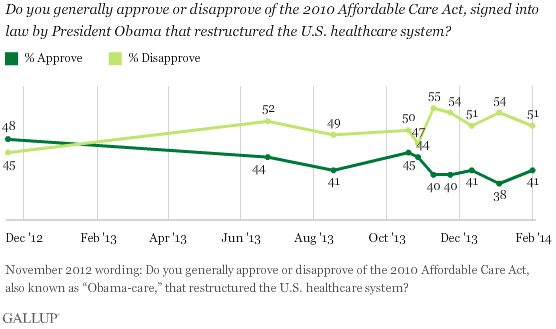 Also consistent with Kaiser tracking - The Kaiser Family Foundation tracking poll for January, released last week, found a similar result: "Views of the law overall remain more negative than positive this month, with 50 percent saying they have an unfavorable view and 34 percent favorable, almost identical to the split in opinion since November. Still, more than half the public overall, including three in ten of those who view the law unfavorably, say opponents should accept that it’s the law of the land and work to improve it, while fewer than four in ten want opponents to keep up the repeal fight." [KFF] 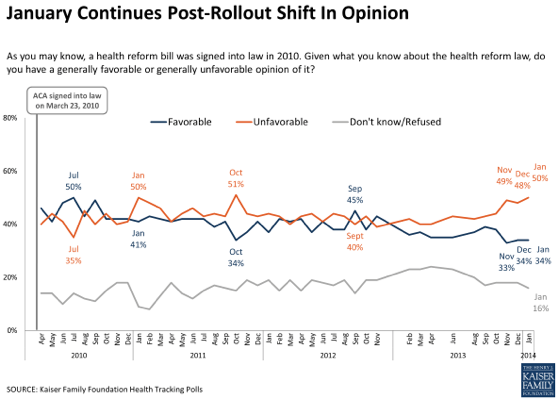 CNN/ORC FINDS OVERALL OBAMA APPROVAL UPTICK - CNN: President Barack Obama's approval rating has edged up a bit since the end of last year, according to a new national poll.But a CNN/ORC International survey also indicates the number of Americans who hope that his policies will succeed has dropped 12 points since last year and a majority now predicts that his policies will fail. According to the survey, which was released Monday, 45% of the public gives Obama a thumbs-up on the job he's doing as President. That's up from 41% in November and December, when the President was at or near all-time lows in polls from CNN and other organizations. The President's disapproval rating now stands at 50%, down from 56% at the end of last year." [CNN]

...but probably not a SOTU Bump - More from CNN: "The President's 45% approval rating is consistent with several other national polls released just before last week's State of the Union address. The speech might have been a mild net plus for Obama, with 44% of all Americans saying they had a generally positive view of the speech, compared to 38% with a negative view. But 16% had no opinion of the State of the Union and over half of all Americans didn't see the speech at all."

FEW AMERICANS AWARE OF FALLING DEFICIT - Emily Swanson and Ryan Grim: "The budget deficit is the lowest it has been since President Barack Obama took office, according to a Congressional Budget Office report this week. But don't expect that to matter to the American people. In fact, the deficit has been falling steadily since 2009. Yet a new HuffPost/YouGov poll shows that Americans still think the deficit is going up and disapprove of Washington politicians accordingly.….According to the new poll, 54 percent of Americans think the budget deficit has increased since Obama took office in 2009, while only 19 percent know it has decreased. Fourteen percent think it has stayed the same since Obama became president." [HuffPost]

Motivated reasoning? - More from Swanson & Grim: "There is something of a partisan divide here. Eighty-five percent of Republicans and 57 percent of independents said they believed the budget deficit had gone up since Obama took office, while only 32 percent of Democrats believed the same."

CLOSE CONGRESSIONAL RACES IN NEW HAMPSHIRE - University of New Hampshire: "Nine months before the 2014 election, New Hampshire incumbent Congresswomen Carol Shea-Porter and Ann Kuster face serious re-election challenges….In a trial heat between Shea-Porter and [Frank] Guinta, 45% of likely 1st District likely voters say they would vote for Guinta if the election were held today, 39% support Shea-Porter, 2% support someone else, and 15% are undecided. This is a significant change since October when Shea-Porter held a 16 percentage point lead over Guinta….If the 2014 Congressional election were held today, 38% of likely voters in the 2nd District say they would vote for Kuster, 34% would vote for [Gary] Lambert, 2% would vote for someone else and 26% are undecided." [UNH]

ABOUT THAT COCA-COLA AD - Neha Sahgal: "Coca-Cola’s 'It’s Beautiful' ad, that aired during Sunday night’s Super Bowl, sought to portray ethnic diversity in the U.S. by featuring 'America the Beautiful' sung in several languages. The many different kinds of people in the ad – Hispanics, cowboys, Muslims, Jews and Asians – were all implicitly united by their identity as 'American'...So how linguistically diverse is the United States? Data from the 2011 American Community Survey (ACS) show that 21% of Americans age five or older speak a language other than English at home. Among this group, a majority say they speak English 'very well' (58%), and 19% say they speak English 'well.' Roughly one-in-seven (15%) of those who speak a language other than English at home say they do not speak English well, and 7% report having no English language skill at all." [Pew Research]

-Rutgers-Eagleton rounds up all the post-Bridgegate polling on Chris Christie. [Rutgers]

-Eric McGhee explains why an anti-incumbent mood is unlikely to translate into many seats changing hands. [WaPost's Monkey Cage]

-Kevin Arceneaux finds "the rise partisan news media is likely a symptom, not a cause, of elite polarization." [WaPost's Monkey Cage]

-Kelly Norton plots a map showing the U.S. places with the most pleasant days per year. [Kellegous via Flowing Data]