On Tuesday, two federal appeals courts issued totally opposing rulings on a pair of lawsuits challenging Obamacare, one of which would tear apart the law and jeopardize health insurance coverage for millions of people who signed up.

You might find that a bit troubling, especially if you're one of those people. There's no reason to panic just yet, though. Here's what you need to know.

No. I just said not to panic.

But the news said!

I know, I know. This is what's going on. Two sets of appeals court judges, one in the District of Columbia and one in Richmond, Virginia, made decisions on separate but very similar lawsuits. Both suits essentially say that, because of a quirk in the law's wording, the federal government is only allowed to provide health insurance subsidies to people in states that created their own "exchanges," or marketplaces where people can shop for coverage and apply for financial assistance.

The D.C. appeals panel ruled 2-1 (two Republican appointees versus one Democratic appointee) in favor of the plaintiffs in a case called Halbig v. Burwell. That decision, if it stands, would be very, very bad for Obamacare. But later the same day, the Richmond appeals panel (three Democratic appointees) unanimously decided a case called King v. Burwell in President Barack Obama's favor. Courts are confusing!

In the meantime, nothing has actually happened to anyone. Did you get a subsidy from an Obamacare exchange? Uncle Sam isn't coming to snatch it back from you while you're sleeping.

No, that's not right, either. If the plaintiffs in these cases get their way, it would blow a giant hole right in the middle of Obamacare and devastate health insurance markets in the 36 states where the federal government runs the exchange because the states wouldn't. That's not really an exaggeration.

For a start, millions of people would lose the subsidies they're getting and not be able to obtain them in the future, very likely leaving them uninsured. 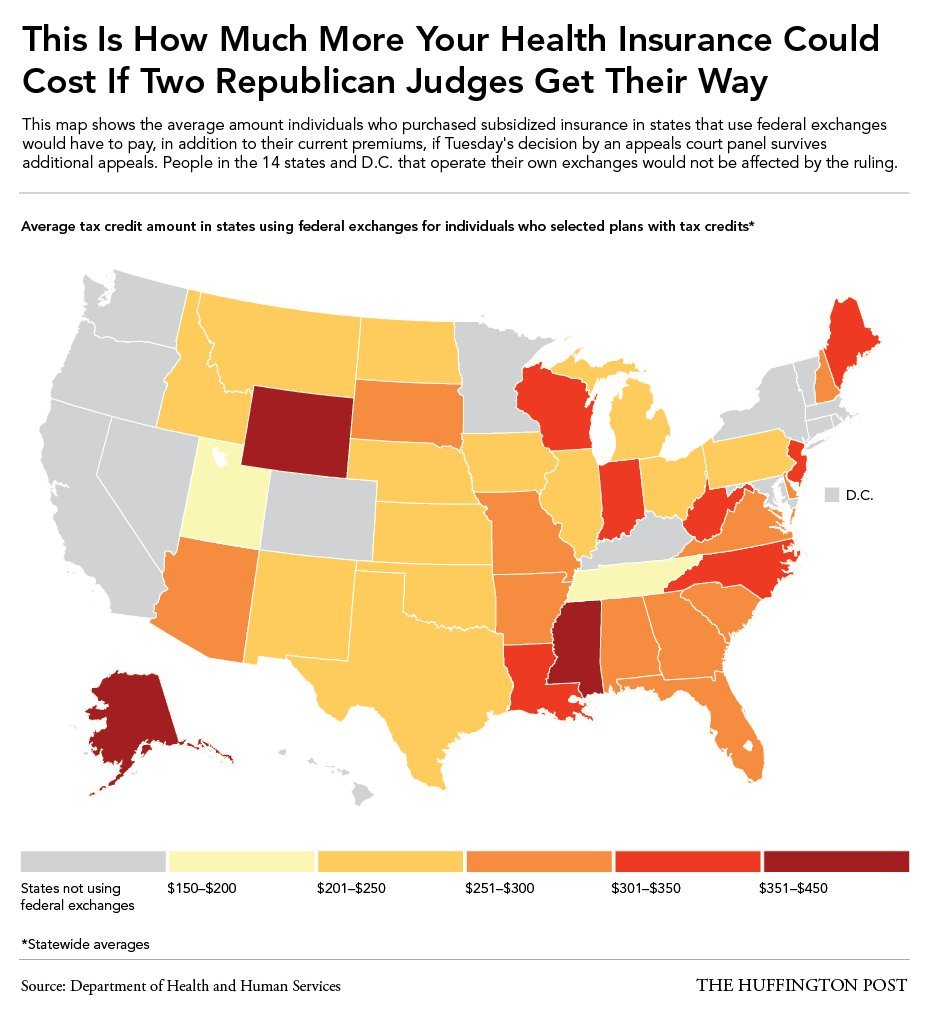 Then the "death spiral" would begin. Believe it or not, that's a technical term for circumstances when insurance becomes so expensive, only people who really need it will buy any.

When the only people who buy insurance are the ones who really need it, they run up huge bills and there aren't enough people paying premiums, but not filing claims, to cover their expenses. This forces insurers to raise rates even higher. Then more healthy people drop out. Then rates go up more, etc., etc. The spiral ends when insurance companies give up on the market altogether, so no one can buy insurance.

It's sort of like those DirecTV commercials about your dad getting punched in the face. Horrible.

That seems like a terrible mess. Is this going to affect me?

If you got a subsidy in one of those 36 states, then yes, it would have a huge impact on your coverage. But if you get health coverage from your job or from government programs like Medicare, Medicaid, Veterans Affairs and such, it's probably not about you. The Obamacare exchanges and subsidies under dispute are meant for people who don't get insurance from those places and instead buy it directly for themselves.

What, exactly, is the legal argument that started all this? 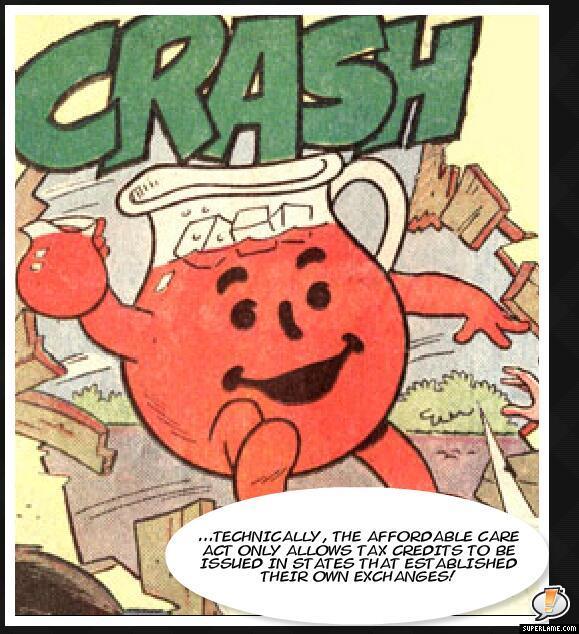 There's a whole bunch of smartypants legalese involved in these lawsuits, but our 60-year-old brand mascot friend has the gist correct. There's a line in the law that says subsidies are intended to be distributed "through an exchange established by the state." According to the plaintiffs in the Halbig case, this would mean the subsidies can't be distributed through an exchange established by the federal government. "Seinfeld" fans may be familiar with this type of reasoning. The plaintiffs further argue that Congress intended this part of the law to serve as a way to pressure states to create their own exchanges, lest their residents be denied subsidies.

Obama's lawyers basically argue that this is nonsense, considering the Obamacare project is largely about helping low- and middle-income people across the country to afford health insurance. Also, no one in Congress ever said that thing about withholding subsidies from any states. Just ask members of Congress -- they'll tell you. Look at the totality of the law, the administration says, and that one line is, at worst, ambiguous, so federal regulators have the authority to clarify any murkiness.

What can be done to stop people getting kicked off their insurance if Obama loses?

Well, if this country had a functioning Congress, it would take approximately zero time to clear this up. A few lines of legislation could be passed and signed by Obama affirming that, yes, the Democrats who wrote the Affordable Care Act always intended for subsidies to be available to the whole country. But since our political system is a disaster, that's not going to happen.

Another straightforward fix would be for the states to run their own health insurance exchanges, as Congress wanted them to do. But the expense, hassle and chance of failure -- hello, Oregon -- combined with intense hostility to Obamacare in most of the same states make that unlikely, too. Some people believe states could do something simpler, like pass laws essentially declaring that the federal exchange is their state-based exchange. It's so crazy it just might work! It's also absurd.

When will we know for sure how this will turn out?

Predicting what courts will do, or when they'll do it, is a fool's errand. In addition to more potential appeals court action in the Halbig and King cases, and possibly Supreme Court consideration, there are similar cases bouncing around in lower courts. How long will that take, and how will it end up? ¯\_(ツ)_/¯