The decline in the non-Hispanic white uninsured rate under Obamacare from 2013 to 2014 was significantly greater than in the immediately preceding years. Based on American Community Survey data, figure A shows that, in the wake of the Great Recession, from 2008 to 2010, the white uninsured rate rose. As the economy recovered, the uninsured rate fell. The average annual rate of decline from 2010 to 2013 was 0.3 percentage points. After Obamacare, from 2013 to 2014, however, the rate of decline was 2.4 percentage points--eight times the prior rate of decline. Thanks to Obamacare, over 3 million more whites had health insurance than would have otherwise. 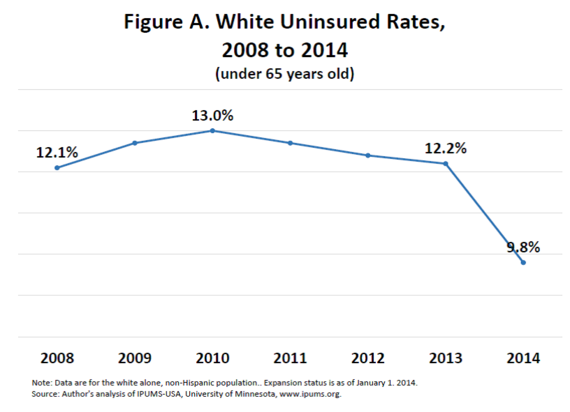 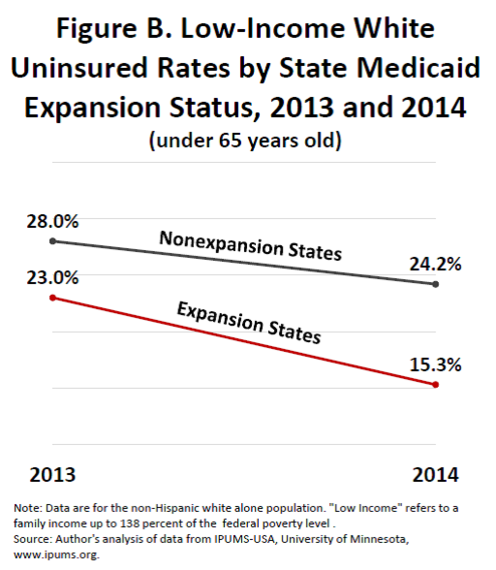 Significant reductions in the uninsured rate for low-income whites occurred even in non-expansion states because of what health policy analysts call the "welcome mat" effect. With the Affordable Care Act came more discussions about health insurance coverage--in newspapers, on TV and among people from all walks of life. Additionally, some uninsured individuals who were eligible for Medicaid may have had friends or family members who obtained health insurance through the health exchanges or through Medicaid in expansion states. All of this additional attention raised public awareness, creating a "welcome mat" that encouraged some people who were already eligible but not enrolled in Medicaid to sign up. Thus, Obamacare boosted Medicaid enrollment even in states that did not expand Medicaid. But, as Figure B illustrates, the increase would have been larger had the states expanded Medicaid.

Recently, Governor John Bel Edwards of Louisiana expanded Medicaid in his state. This action made 300,000 more Louisianians eligible for Medicaid. It is a positive move for Louisianians of all races.

This post first appeared on GlobalPolicy.TV. Algernon Austin is the author of America Is Not Post-Racial: Xenophobia, Islamophobia, Racism, and the 44th President which is the only book to analyze the 25 million Obama Haters in America.