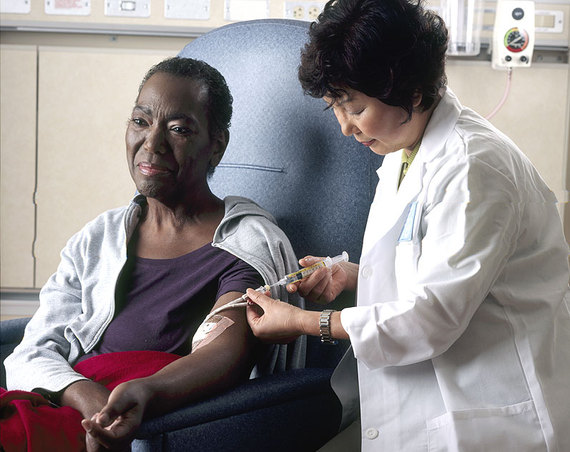 While Obamacare stories often focus on the law's insurance premium impact, a lesser known provision of the law is starting to save some patients money and provide more choice in treatments. Chemotherapy patients overwhelmed with high medical bills now have access to a new and more affordable drug on the market to help them fight infections.

The drug, Zarxio, launched in September and became the first ever biosimilar on the U.S. market. Zarxio acts like a generic alternative to the reference biologic Neupogen. While not chemically identical like traditional generic drugs (because biologics and biosimilars are made from living cells and no single batch is exactly the same), biosimilars are clinically and therapeutically similar.

Until Zarxio's launch, the U.S. had been behind much of the developed world in adopting biosimilars. Federal regulation was slow to catch up with modern medicine. Thanks to the Affordable Care Act (ACA), a regulatory approval pathway was finally mandated in 2010 enabling the Food and Drug Administration (FDA) to approve biosimilars. And after over five years of delay, the approval pathway is finally in place leading to new, competitively priced treatments like Zarxio.

At launch, Zarxio's price is 15 percent cheaper than the brand-name biologic alternative. For these types of complex and expensive drugs, this means hundreds if not thousands of dollars in savings for chemo patients. And the savings could continue to grow. In Europe, where biosimilars have been on the market for almost a decade, the median reduction in price has been 35 percent according to an IMS Health study. In fact, when Zarxio first entered the European market in 2009, it came in at a 15 percent discount. Today, the price gap has grown to around 20 to 30 percent.

This price competition in a market where biologics have been protected is good news not only for patients' pocketbooks, but for health care providers and insurers too. Health care providers will now have more options in the available therapies for chronically ill patients and can expand access to these life-saving treatments for some patients who would have otherwise turned down costly biologics. Insurers will benefit from lower claims and have more negotiating power in covering these complex treatments. This includes benefits for public payers like Medicare and Medicaid with high numbers of beneficiaries on biologics. When the ACA was enacted, the regulatory approval pathway for biosimilars was estimated to save American taxpayers $7 billion over 10 years.

Of course, brand-name biologics are not going quietly. After a multimillion dollar lobbying effort during the ACA debate resulting in a 12-year exclusivity period for biologics and subsequent attempts at regulatory interference, they are now employing legal attacks on biosimilar producers. Amgen, which owns Neupogen, succeeded in delaying Zarxio's launch by six months through a lawsuit that, in the end, favored Zarxio's maker Sandoz. Naturally, with billions in revenue on the line, biologics producers will use every legal tool available to hold onto market share for as long as they feasibly can. But in the meantime, the chronically ill patients needing these more affordable treatments are the ones being hurt the most.

Finally having the first biosimilar in the U.S. is a huge Obamacare win for patients. Just this month, pressure from biosimilars in the U.K. led the U.S. drug maker Merck to cut the price of one of its biologics by 25 percent. But if brand-name biopharma companies continue on their current path of stall tactics, competitive benefits like this will be slower to realize.