With only a few days remaining in the second-ever Obamacare sign-up season, the White House, insurance companies and enrollment workers expect a big rush as Americans hurry to get health coverage.

“Consumers should consider Feb. 15 as their last opportunity to get coverage,” said Andrew Slavitt, principal deputy administrator of the Centers for Medicare and Medicaid Services, during a conference call with reporters Wednesday. “Interest in signing up for coverage in the final week of open enrollment is beginning to increase,” he noted.

The Centers for Medicare and Medicaid Services is the federal agency that oversees enrollment under Obamacare.

In the weeks leading up to the deadline, federal and state officials, the insurance industry and enrollment workers around the country have stepped up their outreach, marketing and assistance activities. They expect a wave of new sign-ups in the final days, as happened when the first Obamacare enrollment period wound down last April. Traffic to HealthCare.gov was 58 percent higher Wednesday than a week before, and calls to the hotline have increased 37 percent, Slavitt said.

“People are going to perk up and people are going to start paying attention close to those deadlines,” said John Gilbert, national field director for Enroll America, a Washington-based nonprofit that organizes sign-up campaigns.

After this Sunday's deadline, the next open enrollment period for private health insurance sold on the Affordable Care Act’s exchanges won’t begin until October. Anyone who starts an application prior to the Feb. 15 deadline will have time to complete it, Slavitt said. In addition, people can access the insurance exchanges during the year if their life circumstances change -- if they get married, for instance, or have a baby. Plus, there is no deadline for enrolling in Medicaid and the Children’s Health Insurance Program.

The second Obamacare sign-up period has gone considerably more smoothly than the first, which launched with a thud in October 2013 amid confusion and near-catastrophic technological failures of HealthCare.gov and the websites of several state-run exchanges. The websites have been running much better this year, and the numbers of enrollees reflects that and the greater public awareness of the Affordable Care Act.

“In every respect, this is working not just as intended but better than intended,” President Barack Obama said at the White House last week. “I want everybody to get on HealthCare.gov. Find out what options are available to you in your state and in your community.”

The president may be overstating the case for his signature program, but round two of Obamacare is going much better from the perspective of those seeking to enroll people. “Certainly, it is much improved from last year,” said Kurt Kossen, vice president for retail markets at Chicago-based Health Care Service Corp., which operates Blue Cross and Blue Shield health insurance plans in Illinois, Montana, New Mexico, Oklahoma and Texas.

Since this year’s sign-up period began on Nov. 15, almost 10 million people have enrolled in private health insurance plans selected via the exchanges. Those include the 37 sites run by the federal government via HealthCare.gov and the 14 operated by states and the District of Columbia, like Covered California and Your Health Idaho. About 3 million of those customers were new to the online marketplaces, and the remainder were individuals with exchange policies last year who had renewed, the Department of Health and Human Services reported last month.

If the last sign-up period is any guide, those numbers could jump after Feb. 15. Forty-seven percent of the 8 million people who enrolled for 2014 coverage did so during the final month of the campaign. Enrollments for 2015 already surged shortly before Dec. 15, which was the final day to choose a plan that would be in place at the beginning of this year.

More than 1,400 enrollment events are scheduled for the final two weeks of the sign-up period, according to HHS. Officials, workers and volunteers are stressing the availability of both health coverage and financial assistance for low- and moderate-income families.

People wait at the Baltimore Convention Center to enroll in health coverage this past Saturday. (Photo: Jeffrey Young/The Huffington Post)

Enroll America and its partner organizations arranged 1,110 events in 109 cities across 11 states in the three weeks leading up to Feb. 15, Gilbert said. The group’s “Countdown to Get Covered” bus tour will hit Alabama, Florida, Georgia and North Carolina in the final days, he said.

Health insurance companies also are gearing up for the deadline. Health Care Service Corp. ramped up its TV advertising in the middle of January, said Kossen. The company’s on-the-ground outreach includes mobile assistance centers across its home territory, like the “Destination Blue” recreational vehicle visiting numerous towns in Texas.

An enrollment event in Baltimore on Saturday attracted more than 300 people looking for help. Some waited hours at the city’s convention center for an opportunity to sit down with one of 40-some enrollment counselors from HealthCare Access Maryland, which ran the six-hour event.

“It’s been very quiet and it’s been steadily busy,” Kathleen Westcoat, president and CEO of HealthCare Access Maryland, said of this year’s sign-up campaign. “We are seeing more people towards the end of enrollment period trying to enroll.”

The turnaround in Maryland since the last time may be even more striking than the improvements to HealthCare.gov. The Maryland Health Connection website was worse than HealthCare.gov, leading the state to scrap its system and use technology from Access Health CT, Connecticut’s exchange. As of Feb. 4, almost 101,000 people had signed up for private insurance for 2015 on Maryland’s exchange, 20,000 more than the number who enrolled for 2014 coverage.

Baltimore resident Harold Waters, 56, joined those ranks Saturday, when he spent more than two hours at the convention center getting help in choosing a subsidized insurance policy from Kaiser Permanente. The policy will cost Waters $74 a month because of tax credits that reduced its price from $434. 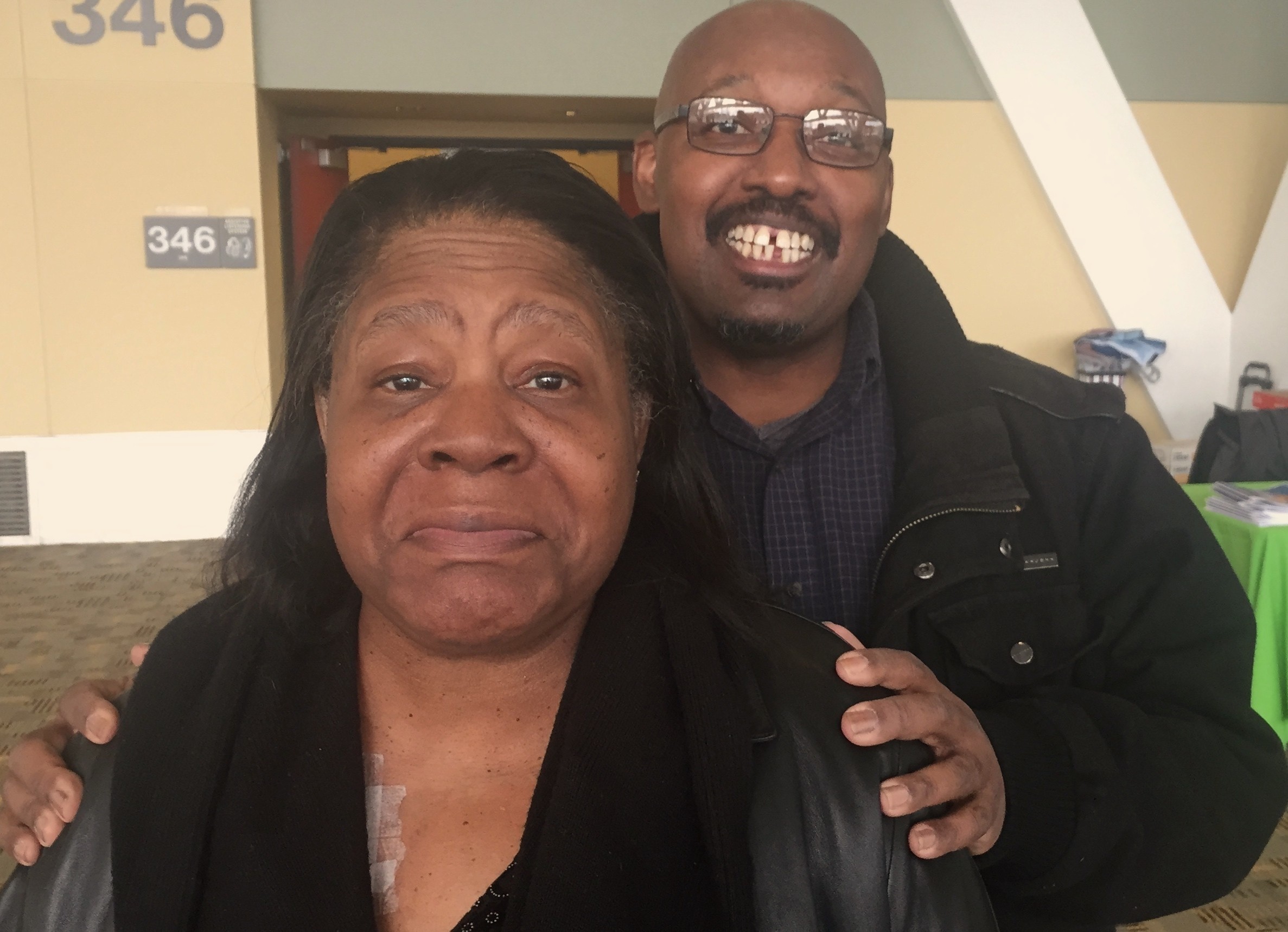 Waters has been unemployed and uninsured since he was laid off as a grocery store manager in July. He suffered a minor stroke after that and was fortunate that Kaiser Permanente offered him a deep discount on his medical treatments, charging him only $962 of the more than $3,000 he owed. “I’ll be able to go see a doctor now,” he said.

Without insurance, Waters was afraid to run up medical bills, said his partner, Melinda Jones, 59.