WASHINGTON -- More than two months after Obamacare's ugly debut, the number of Americans using the system is starting to grow: Nearly 1.2 million people are on track to have health coverage in place next year from the law's health insurance exchanges, the Department of Health and Human Services announced Wednesday.

From Oct. 1 through Nov. 30, almost 365,000 people enrolled into private health insurance via the federal and state marketplaces and more than 803,000 were deemed eligible for Medicaid or the Children's Health Insurance Program, according to the department.

The federally run exchanges in more than 30 states accounted for 137,000 of the enrollments in private coverage, and the remaining states signed up 227,000. About 1.9 million more people had been determined eligible for coverage through the marketplaces, but hadn't yet chosen a health plan. The new data don't include an apparent flurry of enrollments in the early days of December.

HealthCare.gov, the federal portal to health coverage in more than 30 states, still has problems, but appears to doing what it's supposed to do: enabling consumers to do shop and sign up for health benefits for next year.

Eric Rawlings, 42, of Decatur, Ga., breezed through HealthCare.gov in about 10 minutes to enroll in a private health plan for himself and his infant daughter in late November, he told The Huffington Post.

"Everybody talks about how horrible this website is and all the glitches and stuff, but I tell you, it was the best experience I ever had shopping for insurance," said Rawlings, who owns an architectural design firm. Rawlings chose the highest level of coverage, a Platinum plan that includes dental benefits, for $550 a month, or about $50 more than he pays for a medical-only policy for just himself this year. He earns too much to qualify for tax credits to reduce his premiums.

Rawlings has been buying his own health insurance since starting his own business more than a decade ago and didn't miss having to disclose his medical history and wait weeks for an approval -- or rejection. Nor did he yearn for paying higher rates because of a pre-existing condition he has, he said. "I have just been waiting for the Affordable Care Act to kick in," he said.

Despite a gradual accumulation of stories like this, President Barack Obama has a long way to go to achieve the targeted 7 million private health insurance and 9 million Medicaid sign-ups anticipated for the first year of the program. The open enrollment period for 2014 health benefits runs until March 31. The Obama administration originally sought to enroll 800,000 people by the end of November.

"We have every reason to believe that interest will continue to grow and enrollment numbers will continue to rise," Michael Hash, the director of the Office of Health Reform at the Department of Health and Human Services, said during a conference call with reporters Tuesday. "We think we're on track and we will reach the total that we thought." The bulk of those sign-ups will come near the end of the six-month enrollment period, he said.

Significant challenges remain if that prediction is to come true. HealthCare.gov and exchange websites in states like Oregon and Maryland continue to suffer performance issues, despite improvements. Health insurance companies and states report receiving incomplete, inaccurate or non-existent enrollment files about would-be enrollees. And consumers, including those whose current policies were canceled because they don't meet Affordable Care Act standards, have less than two weeks left to sign up for coverage that will be in place on Jan. 1.

Still, Obamacare enrollment is quickening nationwide as the Dec. 23 deadline approaches for those who want coverage in place on Jan. 1. After weeks of feverish efforts to repair the broken federal website, the Obama administration declared Dec. 1 that it would be functional for the "vast majority" of users. In the first three days of this month, 56,000 individuals reportedly signed up via the federal system.

"We invite those Americans whose experience with HealthCare.gov have been frustrating to them so far to come back and try again. The HealthCare.gov website is night and day from where it was on Oct. 1," Hash said.

In contrast to November and December, national enrollment into private insurance in October was just 106,000 -- only 27,000 of which came from the federal system -- and 396,000 were determined eligible for Medicaid or the Children's Health Insurance Program. The report issued Wednesday includes enrollments for both October and November and reflects a nearly fourfold increase in enrollments via the federal exchanges in the second month compared with the first. 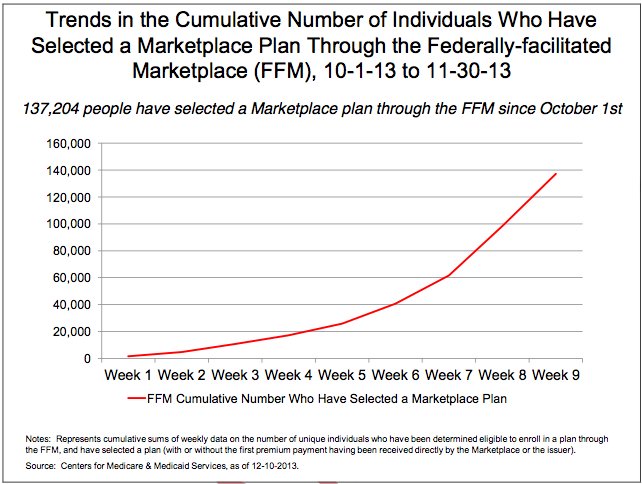 Beneath the signs of improvement, however, are troublesome issues that continue to jeopardize the enrollment process and individuals' health coverage for next month. Although HealthCare.gov appears to be more reliable, some users still report error messages, garbled applications and other problems, such as getting their identities verified. And Cover Oregon and the Maryland Health Connection are among a handful of state-run exchanges with significant technical problems.

About one-fourth of enrollments in private insurance through the federal exchanges in October and November, and about one-tenth so far this month, were flawed, the Centers for Medicare and Medicaid Services disclosed last week. Health insurance companies are receiving incomplete, inaccurate or nonexistent data about their new customers from the federal system, and some states are experiencing similar difficulties. Likewise, the federal exchanges are providing states with information about Medicaid enrollees that may not be correct.

Together, these problems threaten to leave some consumers in the lurch next month when they try to use their new benefits, only to find they aren't actually covered. Matters are more urgent for consumers whose current policies can't be renewed, and for those with pre-existing conditions covered by government programs that are expiring at year's end.

Obamacare's prospects will depend heavily on whether the negative experiences of people in those situations outnumber or overwhelm those of individuals who feel better off because of the law, like Kelly Wilson of New Orleans.

After struggling with HealthCare.gov at first, Wilson, 39, signed herself up for a subsidized private health plan and enrolled her kids, 3 and 7, into Medicaid for medical and dental benefits on Dec. 1, Wilson, a college professor who has worked part time to take care of her children since her husband died in 2011, told HuffPost via email. This year, Wilson's plan costs $438 a month, she said. Next year, she will pay $219 a month, after $114 in tax credits, for a Silver plan with a lower deductible and dental coverage.