Predicting the ways in which Obamacare would fail and ruin America has been something of a cottage industry for conservative politicians and talking heads since the Affordable Care Act passed in 2010.

Sometimes the Obamacare haters resolutely held their ground even as the facts disproved their theories. This is known as "Obamacare trutherism."

So let's take a journey down Bonkers Lane and remember together some of the scariest prognostications about Obamacare that turned out to be untrue.

1. Prediction: No One Is Going To Pay For Health Insurance

What happened: Just About Everyone Paid For Health Insurance. After we learned that more than 8 million Americans signed up for health insurance on the Obamacare exchanges by April, it became hard to argue that no one would enroll. So conservatives moved on to a new theory: No one was actually gonna pay for it. The taker-class, 47 percenters who had latched on to the government teat were deadbeats who don't pay their bills, the argument went, basically. "But how many have paid??" they asked. Over and over.

House Energy and Commerce Republicans released a laughable "report" in April asserting only two-thirds of enrollees had paid premiums. Then they held a hearing about it, where health insurance company executives lined up to tell them they were were dead wrong, and the number was more like 80 percent to 90 percent.

Finally, after months of caginess, the Obama administration offered a real answer: 7.3 million enrollees were paid up as of Aug. 15. That's down from the 8 million announced in April, but still more than the 6 million the Congressional Budget Office predicted would sign up. 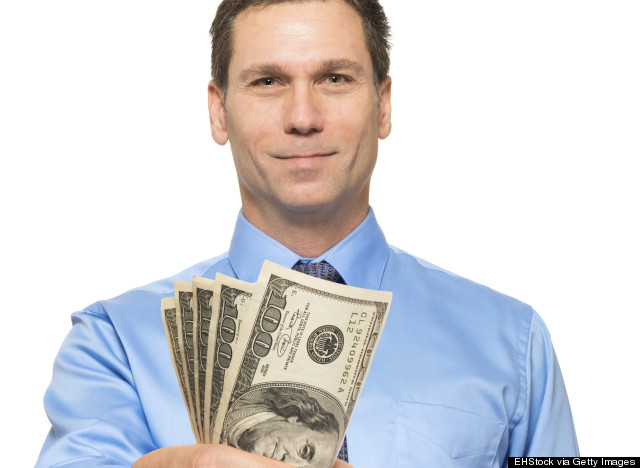 "Thank you for the health insurance. Here is my money." - Most people

2. Prediction: Premiums Are Going To Skyrocket!!

What happened: Premiums Went Up A Smidge. Maybe the loudest, most persistent prediction was that health insurance prices would go through the roof next year because so many sick people would sign up, and so few young people, that insurers would have to jack up prices -- maybe even by as much as 300 percent! And then a "death spiral" would begin and undermine the whole industry!

Back to reality: Forty-six percent of the people who bought plans on the exchanges said the plans were less expensive than the ones they had in 2013, according to a Henry J. Kaiser Family Foundation survey from March and April.

Thirty-nine percent of enrollees surveys did said their new plans were more expensive. These higher rates mainly affected younger, healthier people who earn too much money to qualify for tax credits to help pay for coverage. Eight-five percent of everyone who enrolled got these subsidies. And the increases were likely a one-time bump, mainly caused by rules making the insurance package better, so it isn't relevant to 2015. And yet...

"O-Care premiums to skyrocket," screamed a March headline in The Hill, which remains the only entity that uses the term "O-Care." FOX News was ON IT. Health insurance prices are going to double -- triple even. Trainwreck!

The basis for this shocking report? Anonymous quotes from "health industry officials." Which ones? Who knows! Stop asking questions. From The Hill:

“...I think everybody knows that the way the exchange has rolled out...is going to lead to higher costs,” said one senior insurance executive who requested anonymity.

The insurance official, who hails from a populous swing state, said his company expects to triple its rates next year on the ObamaCare exchange.

Color us rate-shocked! But wait -- what's that, consulting firm PricewaterhouseCoopers? The average premium increase on the exchanges next year will be 6 percent? (That's less than 300 percent, if you don't have a calculator handy.) That doesn't seem so bad, and is lower than typical increases for individual insurance policies before Obamacare.

3. Prediction: Obamacare Is The Worst Thing To Happen To Young People Since Moms Joined Facebook

What Happened: A Lot Of Young People Are Insured, Pleasing Moms Everywhere. Young adults were urged to "burn their Obamacare cards" by right-wing outfits trying to disrupt Affordable Care Act implementation. Their argument: Obamacare is a bad deal for 20-somethings because they'd be paying a ton just so old people and sick people could go to the doctor. Millennials were better off paying the fine for violating the law's individual mandate than buying health insurance. And anyway, these "young invincibles" didn't even want health insurance (contrary to what they actually said in polls, but whatever).

Obamacare was designed to "screw" young adults, they were told. But in 2010, the law started allowing people to stay on their parents' health insurance policies until they turn 26, and in 2014 it began offering subsidized coverage to people with low and moderate incomes, which includes lots of young people just starting their careers. The result:

What happened: Obamacare DECREASED The Uninsured Rate. Considering that the Affordable Care Act will spend about $1 trillion over a decade to subsidize health benefits and requires most people to get covered, this idea seems just plain silly. But that hasn't stopped politicians and others from expressing it aloud!

House Speaker John Boehner (R-Ohio) himself got in on the action, saying in March there was a "net loss of people with health insurance." Whoa if true.

All available evidence shows that the uninsured rate is down -- way down. According to Gallup, it hasn't been this low since the 1990s. 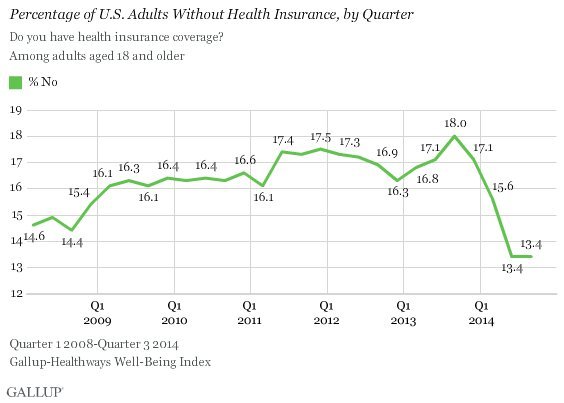 The Department of Health and Human Services and the Harvard School of Public Health concluded in a New England Journal of Medicine article that 10.3 million more people have health insurance this year than did last year.

What happened: Health Insurance Companies Got A Lot Of New Business. A big part of this claim rests on exploiting public confusion about what "Obamacare" is, and ignoring the fact that private health insurance is what's being sold on the exchanges. (Not to mention that even "single-payer" Medicaid is largely contracted out to private insurance companies.)

Another component of this prediction was that the Affordable Care Act lays too many regulations on health insurers. And there are lots and lots of regulations, like the prohibition against rejecting customers with pre-existing conditions and the mandate for a guaranteed minimum benefits package, that insurers wish they didn't have to follow.

Yes, look. After the first enrollment period brought in more than 7 million paying customers and the promise of millions more in the future, health insurance companies grew more confident (even some of those, like Aetna, that expect to lose money on the exchanges in 2014).

How confident? There will be 248 more health insurance plans available on the exchanges for 2015 than there were this year, a net increase of 25 percent (including a few companies that bowed out) compared to the first enrollment period. 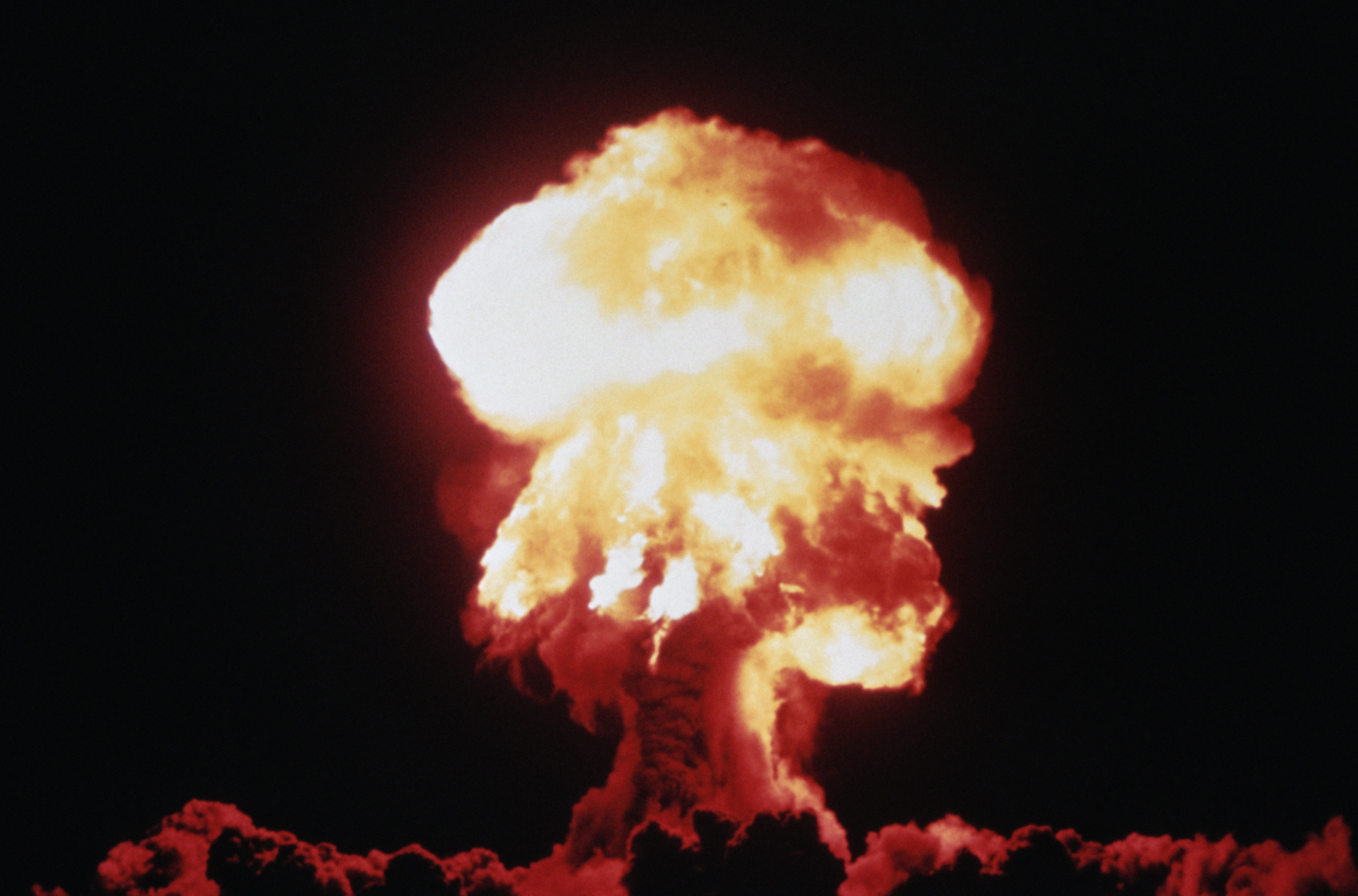 Not a photo of the U.S. health insurance industry