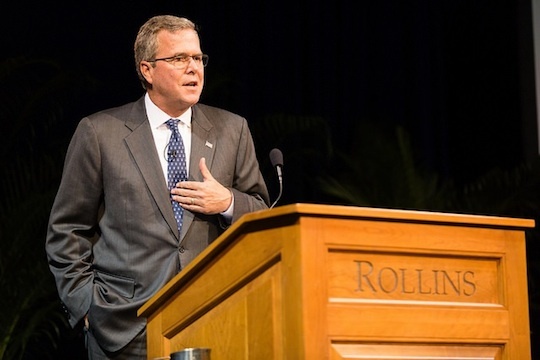 At a public talk at Rollins College, Jeb Bush claimed that health insurance premiums would increase 40 to 50 percent in 2015. (Photo Credit: Scott Cook)

Republicans have been predicting that premiums will skyrocket since the Affordable Care Act was first proposed. For example, when former Florida Governor Jeb Bush spoke at Rollins College this past March, he remarked, "Most of these [health insurance] plans, if not all of them, will have losses. And the losses will require 40 to 50 percent increases in premiums. When 2015 premiums are announced, many insurance companies will drop out, or people will drop it, because it is too costly." If this were to happen, it would certainly be a definitive failure for the Obama administration. But the question is, do we have enough evidence to support Bush's proposition?

Predictions that premiums will rise do have some grounding. Health care companies set their insurance prices by spreading the cost of risks over large groups of people. Given that young people on average have significantly lower health care costs than older populations, the more young people who are in a risk pool, the cheaper insurance will be. Therefore, it is necessary for a significant number of young people to sign up for insurance in order for premiums to stay low. Using this logic, Republicans have been claiming for months not only that not enough of the younger generation will sign up for health care coverage, but also that not enough people in general will sign up to make the government exchanges a success.

Although the Obama administration has surpassed its goal of 7 million people signing up for insurance, thus dispelling the fear that not enough people would sign up, the number of young people enrolled in the exchanges is less than some hoped for. Larry Levitt from the Kaiser Foundation said that having 40 percent of people who signed up for health care be between ages 18 to 34 is what would be ideal to keep premiums down. But as of April 2014, only 28 percent of those who signed up for health insurance were in this age group. However, this lack of response from the younger generation is predicted to contribute a mere 1 to 2 percent increase in premium costs, a far cry from Bush's 40 to 50 percent.

To make matters even more complicated, in some states, premiums have gone up, and in others, premiums have gone down. This is due to the fact that states have had a huge disparity in how well they have implemented the reform and that each state is its own individual risk pool in the exchanges. For example, at the end of March 2014, 54 percent of those eligible to sign up for private insurance in Vermont had enrolled, while in South Dakota, only 6 percent of those eligible for insurance had done so.

Because of this, it is difficult to determine how much premiums will rise overall. The New York Times reported:

Premiums are not expected to spike next year, but insurers say they will be somewhat higher because of many last-minute changes in government rules and policy. Premium increases, like premiums themselves, will vary from state to state.

Furthermore, the ACA contains programs and additional subsidies that would take effect if enrollment is less healthy than expected, which would prevent the general population from feeling the effects of severely rising premiums.

Therefore, Bush's claim that premiums will rise 40 to 50 percent is deeply misleading. At this time, not even insurance companies possess the information to determine specific percentage increases of future premiums, but they will almost certainly be lower than the predictions of most Republicans.