If you’re searching for a modern-day Robin Hood, look no further than Obamacare, or the 2010 Affordable Care Act as it’s more boringly known.

That’s because President Obama’s landmark health care reform law indeed does take from the rich (and middle class) and give to the poor, according to a new paper out of the nonpartisan Brookings Institute.

The study’s authors, Henry J. Aaron and Gary Burtless, found that the poorest 20 percent of Americans will receive what amounts to a 6 percent raise in their average income as a result of the law.

Everyone else will see their incomes fall by 0.3 to 1.1 percent. Of course, the rich will lose the smallest percentage of their incomes, because that's generally how America functions. The study was based on a government survey of more than 60,000 people, according to the AP.

This chart explains the whole situation better than we can: 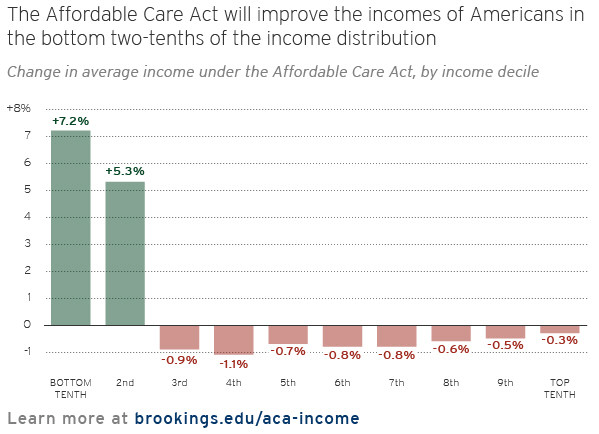 "This is certainly a very big deal for the income distribution of the United States," co-author Gary Burtless told the AP. "If you are raising the incomes of the people in the bottom fifth by 6 percent, then we are talking about a big change."

It should be noted that the authors define income here in an unconventional way, in that they count the money the government and your employer spend on your health insurance as part of your income. “If we use a definition that doesn’t count the extra spending as ‘income,’ household incomes obviously will not change very much,” the authors write.

And since that's the case, the redistribution of wealth makes sense. Two of the law’s most controversial aspects involve policies that help the poor: The politically-charged Medicaid expansion and the creation of subsidized tax credits, which are meant to help poor families buy insurance through Obamacare's exchanges.

In an email to The Huffington Post, co-author Henry Aaron listed a number of reasons Obamacare takes a small slice out of the incomes of the top 80 percent: an increased payroll tax for the rich, a new tax on investment income and a reduction to enrollees in Medicare Advantage, a private insurance plan. The AP listed a jump in Medicare premiums for the wealthiest retirees as an additional reason.

Burtless said in a phone interview with HuffPost that the study's results shouldn't overly concern Americans that appear to take a hit. "We do not take into account the benefit that people derive that if they lose their insurance there will be an affordable insurance plan available," he said. "That has value to most of us.'

We’ll leave the cable news world to decide which emotion is most appropriate.