Anyone who wants to be hopeful about the future of the Affordable Care Act has a long wait ahead of them. Specifically, until the end of November, which is when Jeff Zients, the management guru tasked with making "Healthcare.gov ver. 2.0" a functioning reality, says he'll deliver the goods. Of course, at that point, one can only really say that things have taken an optimistic turn -- even if the website works as intended. Obamacare enthusiasts still face a shortened timeline to get an adequate number of people enrolled.

So, what to do until then? Well, it looks like this chart, along with others of similar ilk, is serving as a hopeful totem in the meantime: 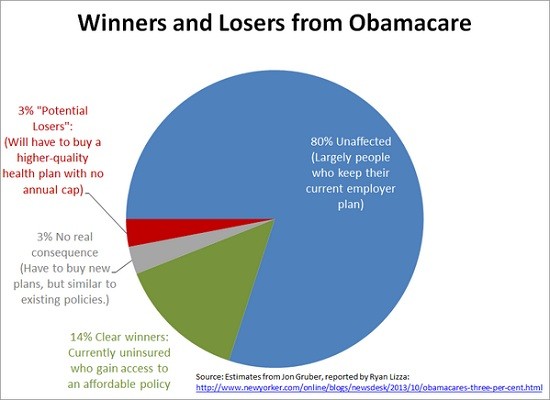 This chart has been generated based on rough estimates supplied by MIT's Jonathan Gruber -- who helped build both Massachusetts' health care system and the Affordable Care Act -- to The New Yorker's Ryan Lizza. The Huffington Post's Jeffrey Young serves up a similar analysis, figuring that while "estimates vary," census data suggests that we're talking "about 4 percent of Americans, which comes to about 11 million people."

Essentially, this is the view of "people who are losing their health care coverage" from 30,000 feet in the air. The first thing you have to acknowledge, however, is that Gruber's estimates still demonstrate that "If you like your plan, you can keep it," was a false thing to promise, even if you're rounding up from 97 percent. Gruber, to his credit, is dead-honest about this with Lizza:

Gruber summarized his stats: ninety-seven per cent of Americans are either left alone or are clear winners, while three per cent are arguably losers. “We have to as a society be able to accept that,” he said. “Don’t get me wrong, that’s a shame, but no law in the history of America makes everyone better off.”

As an interesting thought exercise, it's worth considering whether, "Three percent of you will not come out ahead, that's a shame, but no law in the history of America makes everyone better off," would have been a better thing for President Barack Obama to say than, "If you like your plan, you can keep it." I stand in the level with people camp. But 1,000 "unnamed political strategists" will tell me that my approach is naive and would ensure that no law ever gets passed. And maybe being honest would keep a lot of laws from getting passed, but maybe that's the cardinal virtue of honesty.

But even if the above chart offers some comfort in the knowledge that the vast majority of Americans aren't receiving shocking letters in the mail from their insurance providers, this nevertheless demonstrates how bad it was that Obamacare had a functioning hashtag before Healthcare.gov was a functioning website. See that 3 percent in the above chart marked "no real consequence?" Well, without a way to actually discover there are no real consequences, how are those people supposed to know that? There are, perhaps, a portion of that population who can avail themselves of a functioning state exchange website, but the potential is there that the number of people who currently think of themselves as "losers" is double the size of the actual "potential loser" population.

That's bad, because what we're going to endure between now and the hoped-for end-of-November launch of a functioning Healthcare.gov website is a month of getting nibbled to death by anecdotes.

As Dave Weigel points out, this sliver of actual and perceived losers still constitutes a population of "millions of Americans" that "can talk to the media about how horrid the experience is." That means, for Obamacare supporters, a "a long trench warfare campaign of fact-checking and, occasionally, apologizing." He points to this "debunking" of an "Obamacare horror story" over at the Los Angeles Times, which while successful, took a lot of time and energy. And remember the old adage, "A lie can be halfway round the world before the truth has got its boots on." Which isn't to say any of these complainants are liars! Health insurance is a confusing racket, and the thought of losing coverage is unimaginably stressful. The best remedy for this uncertainty, if not the coverage quandary itself, is a website that does not yet exist.

Naturally, it should be noted that it's rather surprising to see so many Republicans suddenly taking an extraordinary interest in people receiving letters about losing their health care coverage. It's certainly a new thing! But it is likely not a sustainable thing. As Philip Klein admits, over at the Examiner, "there’s also a danger of making the idea that nobody’s coverage will ever change as a result of reform a tenet of Republican health care policy."

Well, I should say so, considering that drastically limiting the number of people covered by insurance is actually a cornerstone of Republican health care policy. As Jonathan Cohn explains:

Start with the federal budgets crafted by Paul Ryan. You remember those, right? Those proposals passed through the House with unanimous Republican support and were, in 2012, a basis of the Republican presidential platform. Those budgets called for dramatic funding cuts to Medicaid. If Republicans had swept into power and enacted such changes, according to projections prepared by Urban Institute scholars and published by the Kaiser Family Foundation, between 14 and 20 million Medicaid recipients would lose their insurance. And that doesn’t even include the people who are starting to get Medicaid coverage through Obamacare’s expansions of the program. That's another 10 to 17 million people.

So it's fair to say that the House GOP is objectively in favor of generating between 14 million and 20 million sad letters to people losing their coverage.

Popular conservative proposals to allow insurers to sell policies across state lines would have touched off a similar spate of sad letters from insurers, as the inevitable race to the bottom that would result from such a policy being enacted would incentivize insurance companies to provide as little coverage as possible on the cut-rate plans. That would result in millions of people being told that to maintain their current standard of coverage, they'd have to purchase an expensive gold-plated health care plan or drop into a tin-encrusted one with caps, coverage gaps, and high deductibles. (It's really ironic, because the Affordable Care Act pushes many of the so-called "losers" onto plans with higher standards at equivalent cost.)

And while the notion of repealing the bill outright may be "dead," as Jonathan Bernstein surmises, the fact of the matter is that an outright repeal of the bill would result in all those people who have successfully managed to sign up for insurance -- some for the first time -- on the functioning state exchanges to lose their coverage as well. My guess is that those who would receive those sad letters would not garner the same sympathy from the same quarters.

Like I said before, the necessity of having a functioning website standing at the ready at the moment this system launched could not be seen in starker relief than it this now. Should Jeff Zients and his crack team of fixer-uppers get the job done, we might get a full picture of just how many people are falling through the cracks and why. And from there, we might be able to make changes at the margins of existing law to assist those people. That might be a task for which we have both the ability to undertake and the courage to attempt.

Should the whole thing go by the boards, however, and we return to the previous status quo of tens of millions of Americans in dire need of help, it will be two decades before anyone has the stomach to try to reform the health care system again.

Nevertheless, while it's going to be no fun for the Obama administration to endure what could be a month (if not longer) of anecdotal news stories from the sliver of the population losing their coverage, it is, for the rest of us, a reminder of what was at stake in the first place. And it was never some politician's electoral hopes or post-career legacy. It was always the fact that tens of millions of America could not afford decent health care.

PREVIOUSLY, on THE HUFFINGTON POST
The Truth About Those Canceled Health Plans

This story appears in Issue 74 of our weekly iPad magazine, Huffington, available Friday, Nov. 8 in the iTunes App store.