WASHINGTON -- Some supporters of the Affordable Care Act claim that polls showing majority opposition to the law are misleading because many of these disapproving Americans really prefer a more liberal alternative. Results of an experimental HuffPost/YouGov survey, however, show that just isn't so.

Since the passage of the health care law, also known as Obamacare, polls have typically found more opposition than support, with the opposition typically falling near or just over 50 percent.

CNN has been unique, however, in regularly asking a follow-up question of those who express opposition: "Do you oppose that legislation because you think its approach toward health care is too liberal, or because you think it is not liberal enough?" On 15 surveys conducted over the last four years, the CNN polls have shown about 12 percent of Americans on average (and a range of 9 to 15 percent) say they oppose the law because it's "not liberal enough." The combination of this middle group and those who favor the law consistently outnumbers those who oppose it because it's "too liberal." 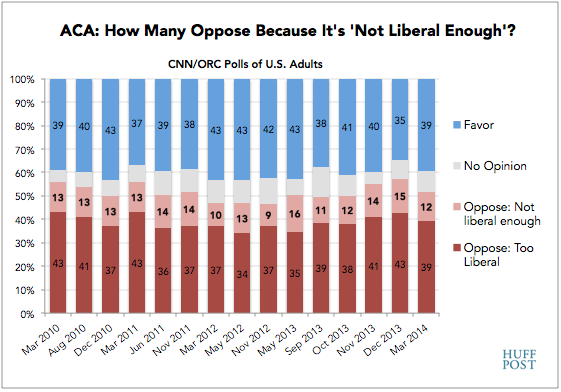 Some have taken these results to a seemingly logical conclusion, arguing that the "not liberal enough" opponents identified by CNN are just "lefties and Democrats who mostly support the concept of Obamacare but want it to go further" (The Huffington Post's earlier reporting reached a similar conclusion). One progressive organization even asserted that calling Obamacare unpopular amounted to 2013's "Lie of the Year."

Unfortunately for supporters of the ACA, it's not that simple. First, as HuffPost reported last September, nearly as many self-described conservatives as liberals in the CNN polls say they oppose the health care law because "it's not liberal enough," especially in recent months. 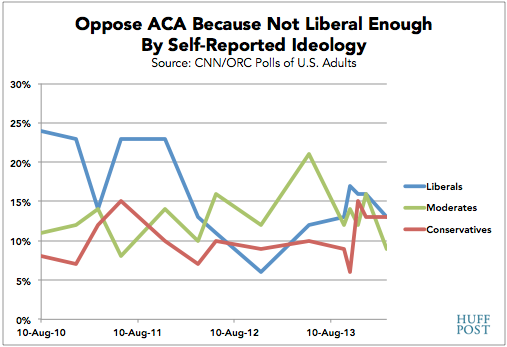 To better understand that apparent contradiction, HuffPost replicated the CNN questions on two HuffPost/YouGov polls and added some additional follow-up questions. The survey was fielded twice this year -- on Jan. 6-7 and Jan. 13-14 -- in order to get an adequate sampling of the not-liberal-enough group.

Responses to the initial favor-oppose question were nearly identical to CNN's results in recent months: On the two samples combined, 38 percent favored the health care law, 52 percent opposed it and 10 percent were unsure. The not-liberal-enough percentage (8 percent of all adults) was slightly lower than the range obtained by the CNN surveys over the past four years (9 to 15 percent) -- probably because CNN interviews by telephone, while YouGov surveys overline a panel of "opt-in" volunteers who have been selected and weighted to represent the U.S. population. 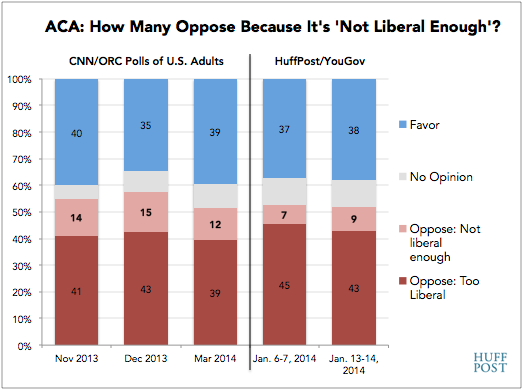 After replicating the CNN measures, HuffPost asked a simple open-ended follow-up question of the not-liberal-enough respondents: "In your own words, what do you mean when you say the health care law is not liberal enough?" Contrary to what many political observers have assumed, very few said they opposed the law because they would prefer a "single payer" system (6 percent of those answering) or would prefer either the "public option" or an alternative to ensure "healthcare for all" (4 percent). This sliver of ACA opponents amounted to just under 1 percent of all adults in the YouGov surveys. 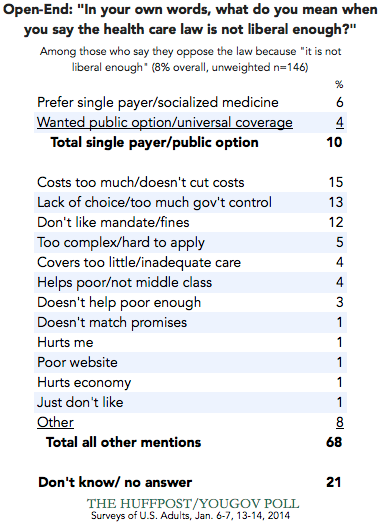 A much larger portion of the not-liberal-enough group referenced high costs (15 percent), the mandate to purchase health insurance (12 percent), or more general complaints about a lack of choice or too much government control (13 percent). These are roughly the same categories of complaint offered by all Obamacare opponents to an open-ended question asked on recent Kaiser Family Foundation tracking surveys.

Of course, as Mother Jones' Kevin Drum has observed, concerns about low subsidies and the high cost of insurance are consistent with "left wing criticism." Verbatim comments from the not-liberal-enough respondents also reveal the way concerns about the individual mandate and personal cost tend to blend together:

"People who already can not keep food on the table and do not have insurance can not buy this but will be penalized because they do not, we were promised that everyone would be able to afford healthcare and this is not true."

"For example, I expected my daughters family to be able to purchase affordable health care. Their gross income is $50,000 for a family of 5. Obamacare would cost them about 6000/year, an amount they clearly cannot afford."

"It is forcing us all to do something we cannot possibly do. Everyone right now is struggling and making us pay a monthly fee to not have health care is hurting everyone, we are all mostly living pay check to pay check and this is forcing us to give up."


In a few cases, respondents explained why the mandate seemed like the opposite of liberal. "I don't think forcing everyone to buy insurance is liberal at all," one said. "Liberal means choice to me at least and it leaves us no choice, we are forced to buy insurance we may neither need or want," said another.

The YouGov surveys also asked a series of follow-up questions about more expansive approaches to reforming the health care system. Just under one-third of the not-liberal-enough opponents (31 percent), for example, want the government to be "more involved in providing health insurance." Slightly more (36 percent) want the government to be less involved, with another third either unsure or preferring no change. 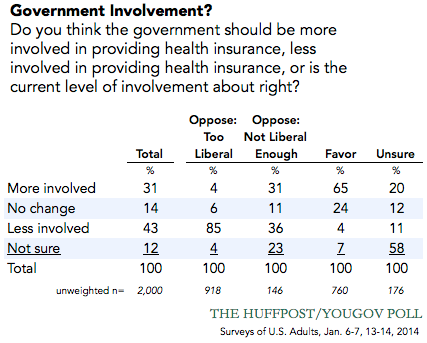 The not-liberal-enough opponents divide evenly (40 percent to 41 percent) on a "single payer" plan in which "all Americans would get their insurance from a single government plan that replaces private insurance." They are roughly as supportive of single-payer as the full population, but far less supportive than those who favor the ACA. 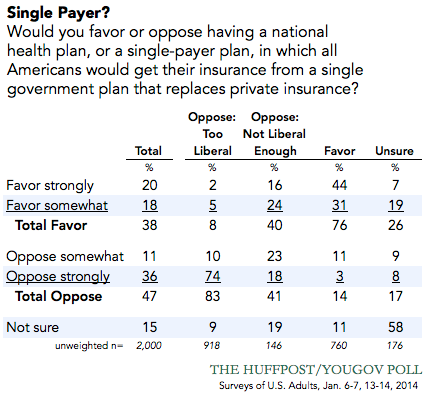 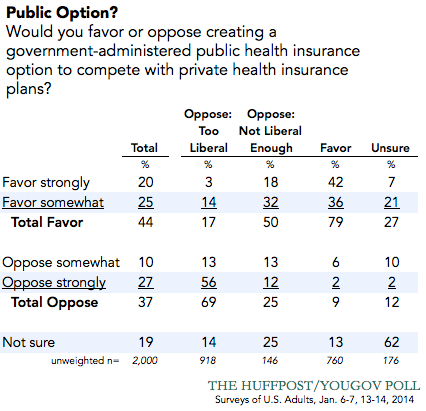 All together then, roughly one-third to one-half of those who oppose the ACA because it is "not liberal enough" said they would support more expansive government approaches. But at least half did not. The findings are consistent with the way these conflicted Americans described themselves on the YouGov surveys: Just 28 percent called themselves liberal, 39 percent moderate and 18 percent conservative.

A handful explained that the "liberal" and "conservative" labels just don't fit their misgivings about Obamacare:

"I didn't like either answer. It is not the fact that it is "liberal" or not is NOT the reason the whole system should be shutdown. The DEDUCTIBLES for this system are not just outrageously high but SINFULLY high."

"Well I had to pick an answer. I just think it is NOT affordable"


One of the biggest differences between the not-liberal-enough opponents and others is their lack of engagement with political news. Just 25 percent said they follow the news and public affairs "most of the time," compared to 61 percent of those who oppose the law because it's too liberal and 52 percent of those who favor it. 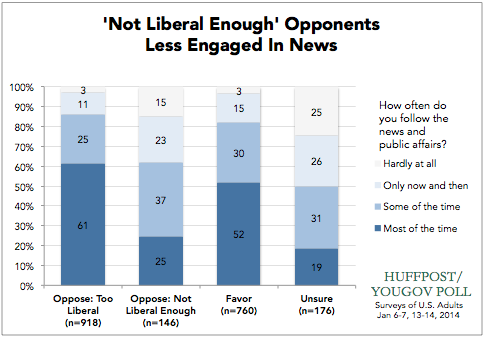 So what do these findings tell us about the politics of Obamacare? The majorities who have formed a negative impression of the law are real, even allowing for a low single-digit percentage who would prefer a single-payer system or a government-run public option.

While these attitudes are driven in part by partisanship and some misinformation, they also reflect opinions about some now largely familiar provisions of the law. Most Americans know that the ACA prohibits insurance companies from denying coverage because of a pre-existing health condition and that it provides subsidies to help lower-income Americans purchase health insurance -- and they approve of those provisions by wide margins. But they also know the law requires that all Americans obtain insurance or pay a penalty, and large majorities express opposition to that mandate.

These mixed feelings may be the hidden good news for Obamacare supporters. A growing number of national surveys find that a majority of Americans would rather keep or try to improve on the existing law than repeal it and start over. Recent polls conducted by the Kaiser Family Foundation, HuffPost/YouGov, CBS News and The New York Times, Bloomberg News, and ABC News and The Washington Post have all found majorities who reject a full repeal in favor of either keeping the current law or making changes to improve it.

Nearly four years of partisan warfare has left many Americans with little appetite for further conflict. On the March Kaiser tracking survey, 53 percent said they are "tired of hearing about the debate over the health care law" and want the country to "focus more on other issues," while 42 percent said "it is important for the country to continue the debate." For a lot of Americans in the middle, whose views do not easily classify as liberal or conservative, it's time to move on.