WASHINGTON -- With the U.S. Supreme Court hearing arguments on the constitutional challenge to the Affordable Care Act, polling on the health care reform law passed by Congress two years ago is once again taking center stage.

Throughout the health care reform debate, pundits and partisans have often tried to boil down public opinion into simple and often contradictory assertions, as they have : Americans either "oppose the Affordable Care Act by comfortable margins" or are "deeply divided." Either they "want to get rid of it" or they want the government to "implement this law smartly" but not "start over."

For better or worse, the reality lies somewhere in between, and public support for the law can not easily be expressed by a single number. The survey data we have, however, do help us better understand the multifaceted opinions that Americans hold on this contentious subject.

While polls may yield conflicting results about the level of support or opposition, most of the general measures show little or no change since the law passed in April 2010. For two years, for example, the Kaiser Family Foundation has asked representative samples of Americans whether they have "a generally favorable or generally unfavorable opinion" of the "health reform bill [that] was signed into law in 2010." Kaiser's most recent survey, conducted in early March, finds that roughly as many Americans rate the law favorably (41 percent) as rate it unfavorably (40 percent), although over the last year they have typically found negative ratings exceeding positive ones by a few percentage points. 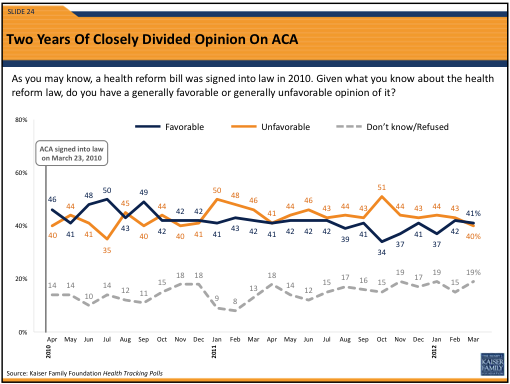 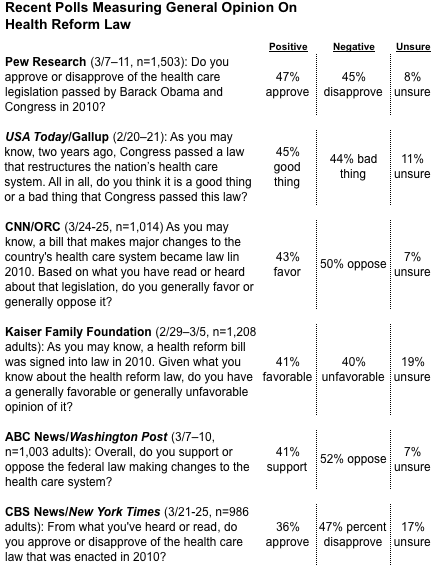 Whatever the reasons for variation, when summarized with the single trend line on the HuffPost Pollster health reform law chart (below), the various public polls show no consistent trend over the past two years. General opinions formed in the Spring of 2010 have largely persisted.

One consistent finding is that support for the law on all the polls falls short of a majority. All of the surveys also show near monolithic opposition among Republicans. What these well-reported results often miss, however, is that a non-trivial portion of expressed opposition comes from more liberal Americans disappointed that the Affordable Care Act does not go farther.

For example, the CNN/ORC International polls conducted over the past two years have found between 50 and 59 percent saying they are generally opposed to the "bill that makes major changes to the country's health care system [that] became law in 2010." However, the same surveys also asked a follow-up question showing that 11 and 14 percent of all Americans oppose the health reform law because they think its approach "is not liberal enough."

That particular wrinkle -- the relatively small but significant number who see critical shortcomings in the law and want it repealed, but want its replacement to do more rather than less -- helps explain why poll questions about repealing the law sometimes produce even more divergent results. The Rasmussen Reports' automated, recorded voice surveys typically find just over 50 percent of likely voters saying they favor a proposal "to repeal the health care bill and stop it from going into effect." But those polls offer only favor or oppose as answers (and use a potentially confusing format that requires respondents to say they "favor" repeal in order to mean that they "oppose" the law).

Surveys that offer three or more choices to better reflect respondents' sometimes conflicted views on the subject find far less enthusiasm for complete repeal. For example, the Pew Research Center has simply asked Americans what "Congress should do with the health care law, expand it, leave it as is [or] repeal it?" They found 38 percent choosing repeal, 20 who want to leave it alone and 33 percent favoring an expansion of the law.

Other pollsters asking about repeal using a similar three-category format, including the Bloomberg News and Suffolk University national polls, have found roughly the same number (between 34 and 37 percent) favoring repeal. The Kaiser Family Foundation, which added a fourth choice to "repeal the law and replace it with a Republican-sponsored alternative," only boosted combined support for total repeal or "repeal and replace" to 41 percent of adults.

Bloomberg/Selzer (3/8-11, n=1,002 adults): Turning to the health care law passed last year, what is your opinion of the law? It should be repealed. It may need small modifications, but we should see how it works. It should be left alone.

11% should be left alone

Suffolk University (3/21-15, n=1,070 likely voters): Do you think that the near-universal health care bill passed in Washington in 2009 should be repealed, modified or left alone?

23% repeal and not replace

These questions just scratch the surface, since they only probe general attitudes toward the reform law rather than its more specific provisions. The Kaiser Family Foundation notes that the "component parts" of the law have been "consistently popular over the past two years," with one "glaring exception." Just 32 percent say they have a favorable reaction to the requirement that "nearly all Americans ... have health insurance by 2014 or else pay a fine." 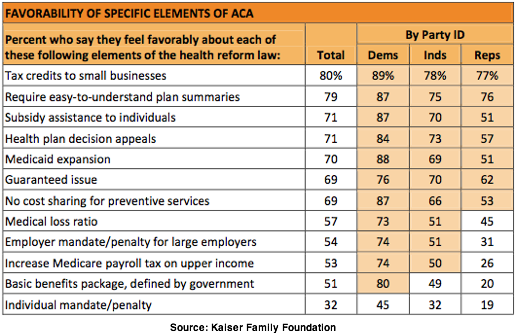 That individual mandate is at the heart of the ongoing challenge to the law being argued in the Supreme Court this week. Many pollsters have asked about how the court should rule, with varying results. One difficulty in measuring these attitudes is that, as of a few weeks ago at least, very few Americans were paying close attention to legal challenges to the health reform law.

"The public is not yet paying close attention to the legal proceedings," the Kaiser Foundation analysts concluded in mid-March, "and opinions on what the Court should do about the mandate mirror views on the law overall." They find most Americans saying the court's ultimate decision will do little to change their views on the health reform law.

The most likely reason general attitudes about the law have not changed is that so few Americans have sense of how the law will affect them. "Two years after passage," the Kaiser analysts write, "the ACA is not yet 'real' for most Americans -- six in ten say they don't have enough information to understand how the law will impact them, and two thirds say the law has not yet affected their family in either a positive or negative way."

Unless and until that experience changes, attitudes toward the health care reform law are unlikely to shift in a meaningful way.