The premiums for coverage available on the health insurance exchanges created by President Barack Obama's health care reform law will vary widely from state to state, according to a new Henry J. Kaiser Family Foundation analysis of data published by 17 states and the District of Columbia.

Retail prices for health insurance can be considerably different based in part on the cost of health care services where a person lives, even within the same state, the Kaiser Family Foundation reported Wednesday. Premiums also vary based on age, family size and tobacco use. But under Obamacare, prices cannot be based on someone's medical history and patients with preexisting condition cannot be turned away. The law also mandates a set of minimum benefits that includes hospitalizations, prescription drugs and maternity care.

The prices included in the report don't include health benefits provided by employers because the health insurance exchanges are intended for the uninsured and those who don't get job-based health plans.

The actual premiums for the health plans on the exchanges have been a chief unknown since Obama enacted the health care law in 2010 and although complete information won't be available until the exchanges open, the Kaiser Family Foundation examined detailed data published by state authorities to create a snapshot of what coverage will cost.

In Baltimore, a 40-year-old will be able to buy a so-called bronze health insurance plan for as little as $146 a month, compared to $336 a month in Burlington, Vt., not including the savings from tax credits available to people who earn up to four times the federal poverty level -- $45,960 for a single person this year -- according to the report.

The health insurance exchanges in all 50 states and the District of Columbia are slated to open Oct. 1 for small businesses, uninsured people, and for people who don't get health benefits at work, to comparison shop and to learn whether they qualify for financial assistance. People who get health benefits from large employers or who are enrolled in government programs like Medicare don't need to use the exchanges. Employers provide coverage to 150 million U.S. residents, according to census data, and virtually all large firms are expected to continue doing so next year despite the Obama administration's one-year delay of the law's requirement that large companies cover workers or pay a penalty.

The exchanges will sell four tiers of health insurance -- bronze, silver, gold and platinum -- indicating how generous the coverage is. Bronze plans will tend to have the lowest premiums, but expose consumers to the highest possible out-of-pocket costs and platinum plans will have the highest prices but the lowest additional expenses. Those younger than 30 can purchase so-called catastrophic insurance with minimal coverage at a lower price, but cannot apply federal tax credits to these plans.

The Kaiser Family Foundation didn't compare the premiums on the health insurance exchange with the cost of health insurance for those who don't get health benefits at work today, however. The new law's guaranteed benefits, prohibition against turning down people with preexisting conditions will make health insurance on this market too different from what's currently available, the report says.

"These changes make direct comparisons of exchange premiums and existing individual market premiums complicated, and doing so would require speculative assumptions and data that are not publicly available," it says. Some people, most likely young adults who don't qualify for financial assistance, may see higher prices as a result.

The variation isn't limited to bronze plans, the Kaiser Family Foundation analysis reveals. "The lowest cost exchange silver exchange plan available range in cost for a 40-year-old from $194 per month in Portland, Oregon, to $395 per month for a 40-year-old in Burlington, Vermont, before tax credits," the report says.

Under Obamacare, people whose incomes range from poverty, $11,490 for a single person this year, and 400 percent of poverty may be eligible for tax credits to buy private insurance. Sixteen states and the District of Columbia are running their own exchanges while the federal government will at least partly manage exchanges, also called marketplaces, in the remaining states.

"Most people buying their own insurance will qualify for premium tax credits, which will significantly lower the cost of their premiums," the Kaiser Family Foundation report says. The foundation also notes that premiums released so far are lower than projected by the Congressional Budget Office.

People who earn up to 133 percent of poverty, or $15,282 for an individual this year, can enroll in Medicaid if they live in the District of Columbia or one of the 24 states that are expanding the program under the law.

The Kaiser Family Foundation examined insurance company filings to state regulators in 17 states and the District of Columbia and analyzed the prices in the largest cities in each jurisdiction for people at ages 25, 40, and 60. At least two health insurance companies are offering products in all of the locations included in the report. California has the largest number of companies participating in its exchange, Covered California, at 12, while HealthSource RI in Rhode Island and Maine's federally run marketplace each have two companies. 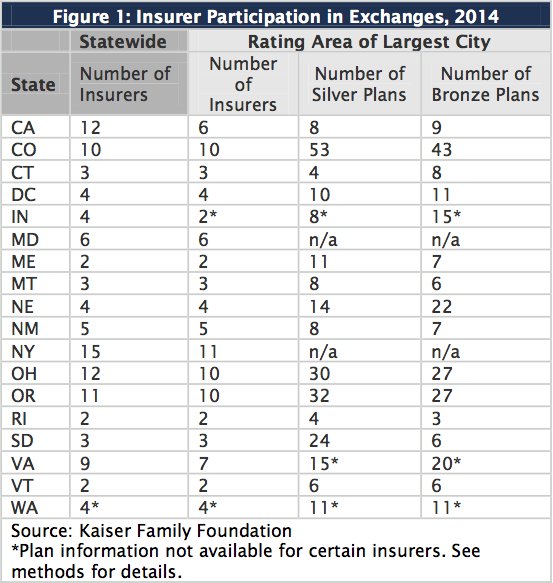 Eligibility for tax credits via the exchanges is determined based on the maximum amount of a person's income they must spend on health insurance and the price of the second-cheapest silver-level health insurance plan where they live. In addition to the tax credits for annual premiums, people who earn up to two-and-a-half times poverty can qualify for additional subsidies to cover their out-of-pocket costs like copayments and deductibles. Most legal residents of the United States must obtain coverage or face a tax penalty under the law's individual mandate. 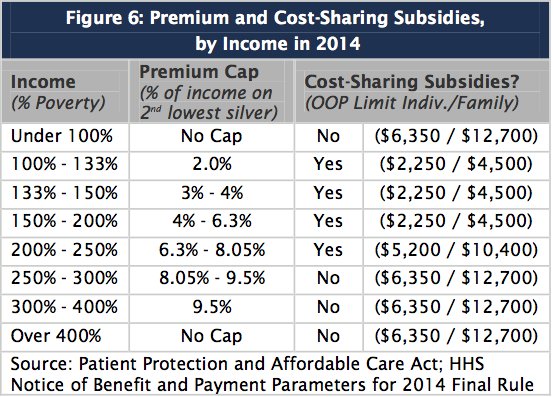 The full Kaiser Family Foundation report includes breakdowns for each example in every one of the metropolitan areas examined.

Obamacare Premiums Will Vary Widely By State And City: Report
People Comparing Obamacare To Hitler, The Holocaust Or Nazi Germany