They're back - and they're more extreme than ever. GOP House leaders John Boehner and Eric Cantor are still pushing economic ideas disproved a century ago, peddling deep spending cuts that would inflict more misery on the already-beleaguered majority. But that's not enough for the even more extreme right, for the politicians named Cruz and Paul and Lee, for the groups with names like "FreedomWorks" and "Club for Growth," and for the moneyed interests who fund them all.

The new Republican right is a tangled nest of snakes. Legislators and observers reach into it at their own risk.

But however beyond the pale these new forces may seem, remember: The fact that their enemies are extreme doesn't mean that Boehner and Cantor aren't.

Hostage of the Week

Boehner and Cantor are once again preparing to use procedural gimmicks to hold the US government hostage to their pro-billionaire, pro-corporate agenda. There's nothing even remotely moderate about Speaker Boehner's proposed continuing resolution. As the Center for American Progress notes, he's attempting to use this routine procedural measure to force $70 billion in additional spending cuts beyond what was agreed upon in the Budget Control Act.

Boehner's "clean" resolution would freeze into place the destructive sequestration cuts that were only intended to serve as a "doomsday mechanism" to encourage negotiations toward a wiser bill.

Jonathan Cohn is understandably concerned that Democrats will be lured into accepting these provisions by telling themselves another round of negotiations is coming up. If that happens the continuing resolution's radical cuts will become the status quo, to be used the same way sequestration's being used right now: as the new baseline for future talks.

Congress has routinely raised the debt limit many times. Its use as a tool for overriding democratic procedures was all but unknown until Newt Gingrich introduced Washington to his brand of pro-corporate thug life. Boehner disingenuously attempted to argue otherwise this week with a "Fact Sheet" which implied that debt-limit negotiations between parties were a routine part of the process.

Unfortunately for Boehner, the facts contradict the "Fact Sheet." There was a debt limit increase in the Gramm-Leach-Bliley Act, for example, but that bill was a bipartisan measure. The 1993 debt-ceiling increase Boehner mentions passed without a single Republican vote.

Boehner and Cantor claim their goal is to reduce the national deficit, but that figure has fallen too far too fast as it is. Europe's experience teaches us that their economic austerity will increase deficits, not reduce them, while spending cuts at the Federal level have both worsened joblessness and lowered the GDP.

If Boehner and Cantor appear unreasonable, it's because they are. Imposing austerity cuts on this economy is as crazy as ... well, as wearing a hat that looks like a birdcage. So it's nothing short of astonishing to discover that their continuing resolution isn't extreme enough for their party's Tea Party wing.

The Tea Partiers want all those cuts, and an end to the entire Obamacare act - including those parts of it that would help the economy and reduce the national deficit. That's like putting an actual birdcage on your head.

The Republicans on the Hill are in absolute disarray, despite the leadership's genuflections to the radical right. It's amateur hour up there. They'll vote again to end Obamacare, says Cantor, because it's "not ready for prime time." That's a topic he should know something about.

If Boehner and Cantor feel these attacks from the right over defunding Obamacare are unjust, that's understandable. After all, it's not as if they haven't given it the old college try: Boehner's presided over forty votes to do exactly that. In fact, Boehner's House has spent an estimated 15 percent of its time attempting to repeal Obamacare since 2011, at an estimated cost of $17 million in Republican House members' salaries alone.

And yet he's being outflanked on the right. Think about that.

Knowing that the Senate would reject an end to the health care bill out of hand, Boehner chose instead to offer two separate votes - one on his attempted hostage-taking, and another on the House's forty-first attempt to end the Affordable Care Act.

"They're screwing us," an anonymous House staffer told Politico, referring to Boehner and Cantor, while Sen. Ted Cruz told the publication that the move was "procedural chicanery" which would make the Republican House "complicit in the disaster that is Obamacare."

"Smoke and mirrors," cried the inaccurately named Club for Growth, as Tea Party demonstrators outside the Capitol cried "Abort Obamacare!" and "Impeach the Liar!" Republican Senators like Cruz and Mike Lee turned against their GOP counterparts in the Senate.

There's much more to the GOP's internal madness than any single story can support. This will help illustrate that: We used mapping tools to lay out every story, and in writing this one we wound up with several maps like the one below. Multiply it four or five times and you start to get a map of the Republican conflict: 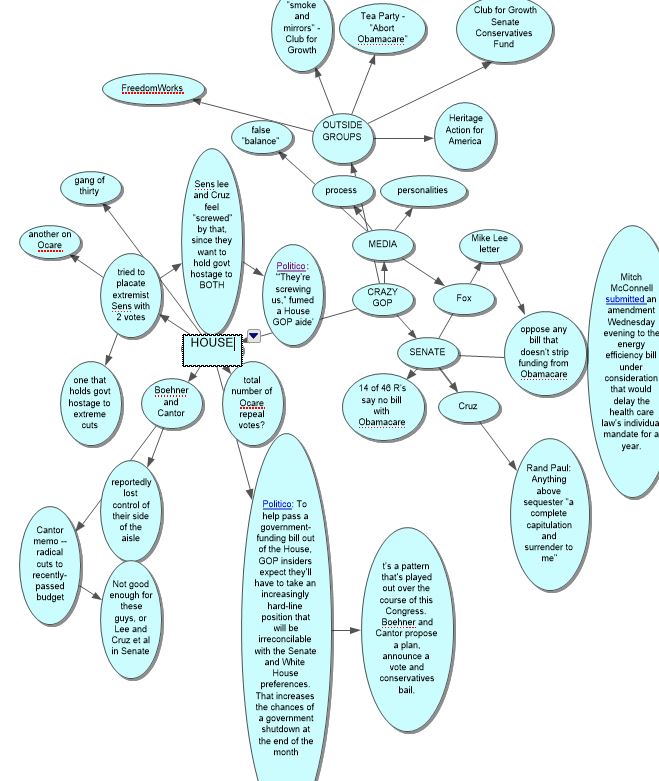 Today's Republican Party: To stare into its face is to risk madness.

But the complexity of their internecine warfare isn't what causes so many journalists to under-report the Republicans' profoundly radical nature. This is:

Inside they're all the same.

The End of Government

Like the Tea Partiers, the Boehner/Cantor crowd hates government. Their budgets have been slashing at its basic functions for years, and not just for classically liberal programs like education or aid to the poor. They're eviscerating widely-supported programs like police work, disaster preparedness and extreme weather warning systems. Both GOP factions hate government.

They hate governing, too. The process used to involve real dialog with your opposition, dialog which was based on certain shared assumptions - that government could occasionally do good things, for example, and that the legislators' job had a certain decency to it.

It's true that politicians have always served their wealthy campaign contributors and potential future employers. But they didn't assume that this was the sum total of their job, the way Boehner and Cantor do. And they didn't enter the halls of government with the goal of tearing them apart, as the Tea Partiers do.

Here's why it will be so hard to get a continuing resolution: A government shutdown isn't a failure for this crowd. It's a success. And if the Democrats cave in to get a deal, that's success too. Either way the extremists may win the day, especially if their opponents are too timid to point out how who and what they've become.

And even if by chance there eventually is a continuing resolution, remember: That only takes us through December.