Shortly before the debut of the biggest element of President Barack Obama's health care reform law, nearly two-thirds of Americans -- and almost three-quarters of the uninsured -- still don't know what's coming, according to a poll released Saturday.

Obamacare's health insurance exchanges, the online marketplaces in every state for the uninsured and people who don't get health benefits at work, are scheduled to open for business on Tuesday. The Obama administration, many states and partners in the private sector have been promoting the exchanges for months to little measurable effect, the survey conducted by the Henry J. Kaiser Family Foundation shows.

The health care reform law is projected to reduce the number of uninsured Americans by 14 million next year, and millions more over the coming decade. But those numbers won't budge unless millions of consumers use the exchanges to shop for coverage and to learn whether they qualify for financial assistance or Medicaid benefits.

These latest poll findings, which are consistent with surveys taken since the Affordable Care Act passed in 2010, show how much work is left to be done by the White House and others who want the largest expansion of health care in decades to succeed. The Kaiser Family Foundation polled Americans from Sept. 12 to Sept. 18.

Just 15 percent of those polled, and only 12 percent of the working-age uninsured, knew the exchanges were launching in October for the start of a six-month sign-up period. Sixty-five percent of respondents were aware that Obamacare created the exchanges, however. 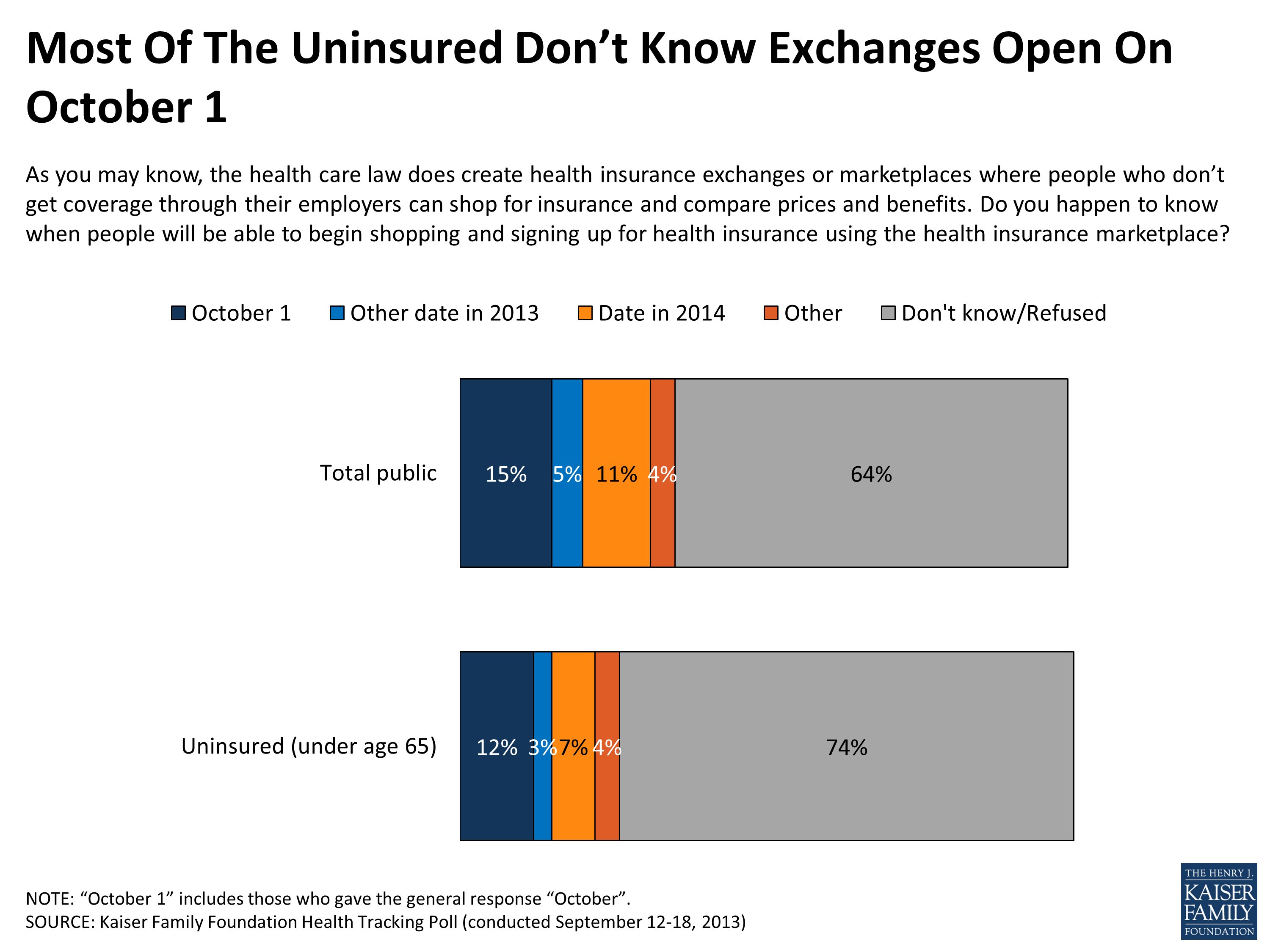 The survey found that more than three years after the law's enactment, 51 percent of Americans felt as though they didn't understand it well enough to determine how it will affect them and their families. More than two-thirds of the uninsured -- those who stand to gain the most -- said the same. More than half of respondents said the news media focuses mainly on the politics of health care reform, rather than on how it affects people. A majority also said there was no news source they could trust to provide information about the law.

Asked what questions they would most like answered, Americans most commonly wanted to know how much health insurance would cost under Obamacare, how the spending is financed, and where they can find a simple summary of the law.

The survey demonstrates just how poorly informed, and often misinformed, Americans are about what's in the Affordable Care Act.

The best-known aspect of the law is the controversial individual mandate that nearly every legal U.S. resident obtain health coverage or face a tax penalty: 79 percent said they were aware of the provision. Majorities also knew about other key features such as the ability of states to expand Medicaid to more poor people and the ban on health insurance companies' rejecting people with pre-existing conditions.

But significant numbers of Americans also continue to believe various fictions about Obamacare. More than 40 percent of those surveyed said, incorrectly, that so-called death panels will decide how to treat Medicare beneficiaries at the end of their lives, that Medicare benefits have been reduced and that undocumented immigrants will receive money to pay for health insurance. None of those things is true.

More than half of those surveyed said the law includes a "public option," a government-run insurance plan that was proposed but rejected by Congress and is not part of the law. 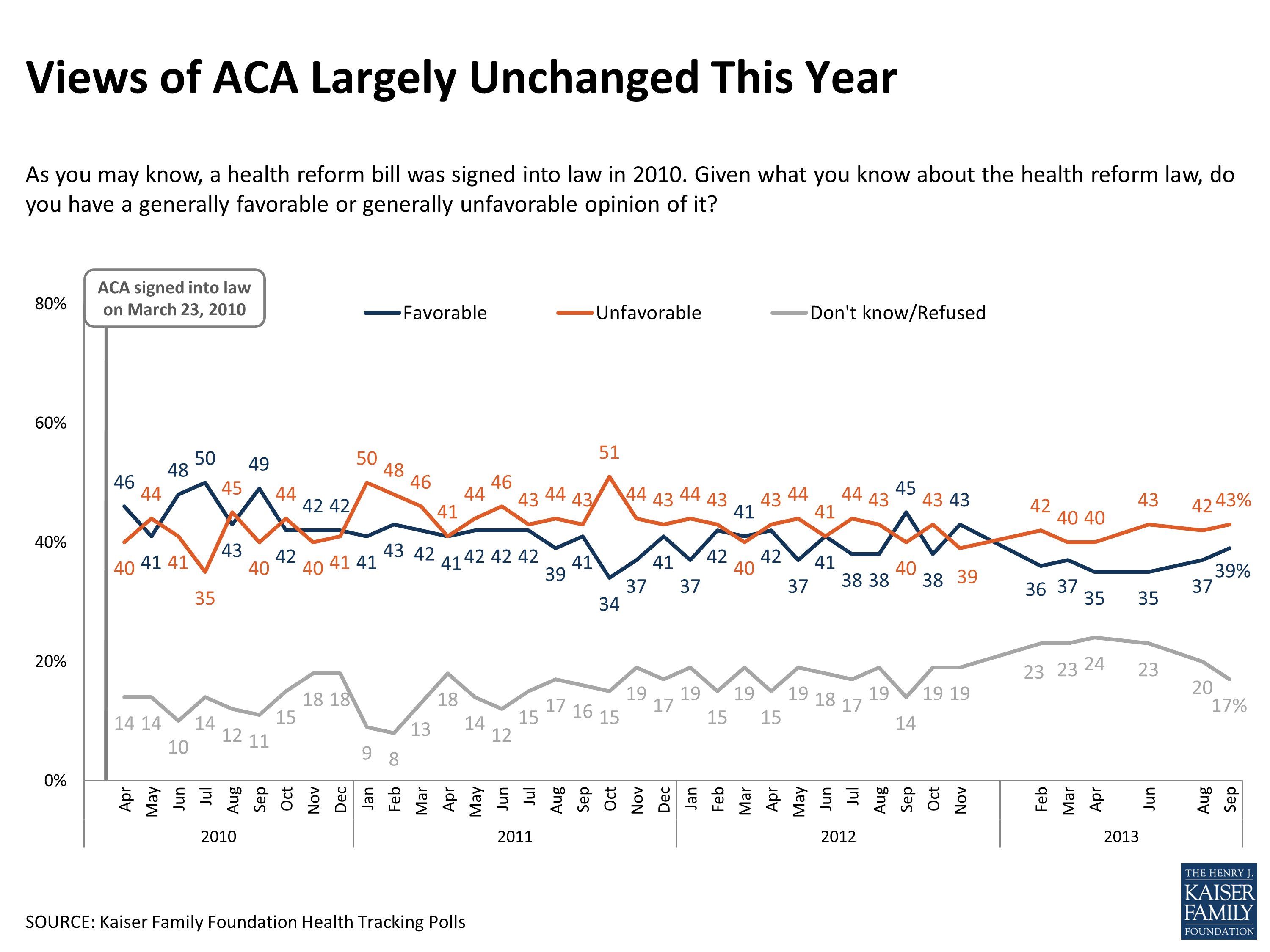 The survey results also showed a sharp and persistent partisan divide. More than two-thirds of Democrats have a favorable opinion of Obamacare, compared to 11 percent of Republicans and 34 percent of independents. Ongoing Republican efforts to thwart the law, including the current attempts to defund it, are opposed by a majority -- but are popular among Republicans, especially those who identify with the tea party movement.