The share of Americans without health insurance fell below 13 percent by the end of 2014, a rapid drop from just a year before and a clear sign that one of Obamacare's primary missions is succeeding, according to new data from the polling firm Gallup.

In the fourth quarter of last year, 12.9 percent of Americans were uninsured, a steep drop from 17.1 percent a year before. The change was driven mainly by increased coverage through the Affordable Care Act's health insurance exchanges and by the expansion of Medicaid access in more than half the country, the Gallup-Healthways Well-Being Index shows, based on more than 43,000 interviews conducted between Oct. 1 and Dec. 30.

President Barack Obama and the congressional Democrats who enacted the Affordable Care Act had broader aims for the law than just covering the uninsured, including providing stronger consumer protections for health insurance customers and curtailing unsustainable increases in national health care spending. But extending coverage to uninsured people, especially those with low and moderate incomes eligible for financial assistance, is the most tangible effect of the law, and survey after survey shows it's working. These gains are threatened, however, by the newly empowered Republican Congress and the Supreme Court.

"The Affordable Care Act has accomplished one of its goals: increasing the percentage of Americans who have health insurance coverage," the Gallup report says. "The uninsured rate as measured by Gallup has dropped 4.2 points since the requirement to have health insurance or pay a fine went into effect. It will likely drop further as plans purchased during the current open enrollment period take effect." 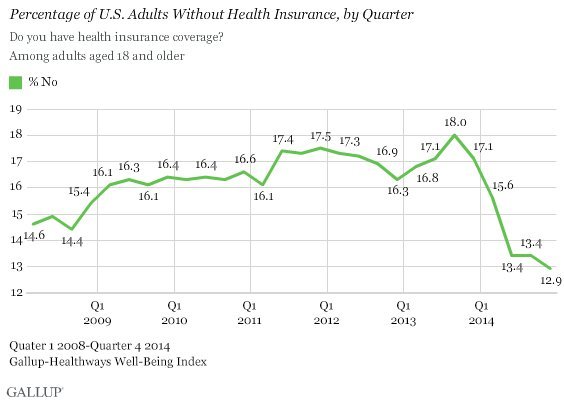 The second Obamacare sign-up period began Nov. 15 and ends Feb. 15. As of late December, 6.4 million people had enrolled into private health insurance policies for 2015, about 2 million of whom were new to the Obamacare exchanges.

The Department of Health and Human Services estimates that more than 9 million people will be covered by private Obamacare exchange plans by the end of the year. In addition, nearly 10 million more people are covered by Medicaid or the Children's Health Insurance Program, two joint federal-state benefits for low-income households, than were covered before Obamacare enrollment kicked off in October 2013.

The new Gallup survey shows declines in the uninsured rate for all segments of the working-age population, and the share of people ages 18-64 without coverage stood at 15.5 percent in the fourth quarter of 2014. The largest decrease was among people ages 18-25, a population that experienced a 6.1 percentage point drop in uninsurance since 2013 to 17.4 percent. Almost all people 65 and older have coverage through Medicare. Low-income Americans and blacks also saw disproportionate declines in their uninsured rates, Gallup found.

Other surveys have shown the improvements in the uninsured rate to be geographically uneven. Southern states with higher-than-average uninsured populations, for instance, rejected the Medicaid expansion, which the Supreme Court made optional for states in 2012, leaving millions of low-income residents uninsured.

And Obamacare's coverage expansion is in grave jeopardy this year.

Republicans newly in control of Congress after the November midterm elections aim to dismantle the law, starting with a House vote this week on a bill that would weaken the Affordable Care Act's requirement that large employers provide health benefits or pay penalties. Obama has vowed to resist these efforts.

But the more serious danger for Obamacare, and for the millions who have gained coverage under the law, is King v. Burwell, a case now pending before the Supreme Court. The plaintiffs claim the federal government lacks the legal authority to provide health insurance subsidies to people living in states that didn't establish health insurance exchanges and allowed the Department of Health and Human Services to do so instead. A ruling against the Obama administration would invalidate the tax credits 85 percent of exchange enrollees receive, making their insurance policies unaffordable and likely causing most to drop their coverage.