Undoubtedly, Obamacare has the right intentions to create a national health care system for the U.S. The U.S. should clearly offer health care that extends from the cradle to the grave, just as it is in most European countries, including France. However, in order to fully achieve this objective, Obamacare needs to be optimized and a number of reforms are needed which we shall label as "Manifesto for U.S. Health Care Reform." Additionally, in order to suitably assess the reforms needed to improve the current Obamacare system, it is critical to compare Obamacare to the French health care system, which is regarded by the World Health Organization as the country with the best health care system in the world.

To solve this problem with the health care system, one must first clearly define the problem. First and foremost, a major problem of the health care industry in the U.S. is the cost spiral which took effect in the '80s and outstripped all other costs, including the consumer price index (as shown in Fig. 1 illustrated below). As is evident in the graph, all five components of health care cost outstripped the average consumer price index as the rate of annual cost increase exceeded that of the general economy. Subsequently, it is causing a prohibitive rise in consumer and business health care costs, along with the annual deficit in the U.S. budget and the national debt. Based on these findings, it seems highly probably that the private health care industry is the culprit. It has simply behaved as a monopolist and exploited the inelastic demand for healthcare and upped prices. 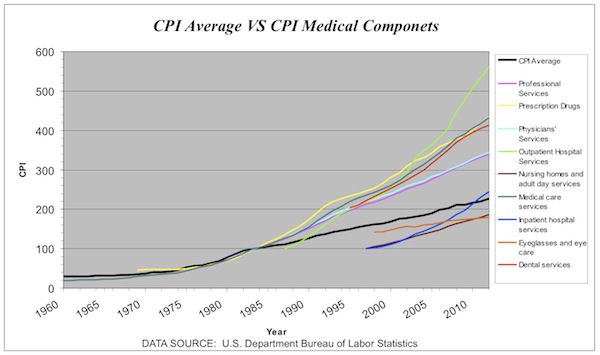 The first is that in the United States, health care services are paid different amounts depending on the patients' health insurance plan. This automatically gives health care providers room to discriminate amongst patients and only select the medication with the higher out-of-pocket costs. Additionally, the system in the United States is not very flexible when it comes to determining the cost for drugs and health services. Changes in health care rates, such as with Medicare, currently have to obtain approval by Congress before they can take effect. This is a cumbersome process, slowing down the capability to react quickly to the needs of the market.

France also differs in their approach to regulating the cost of health care services in their country. France has an organization called the CNAMTS that monitor spending for services across the country. If spending for a certain kind of drug or service rises in a particular area, the CNAMTS have the authority to go in and reduce the price of this drug or service to make it more accessible and ease the supply to cope with the needs of the market. In conjunction with this living system, France has also implemented a common fee schedule across the country that requires that health services provide a standard price for procedures, regardless of health insurance policies.

However, there is no clause in the Affordable Care Act that requires a system like the one in France to be implemented in the United States. While Obamacare has strived for a more equitable solution to America's healthcare system, it has fallen short of achieving bureaucratic efficiency. The status quo administrative costs for private insurance companies are nearly three times the costs in France (5% France & 14% U.S.), and Obamacare is not structured to reduce those costs effectively. In order to achieve a more optimal outcome, the United States can use Medicare as a precedent to emulate. Medicare's administrative costs hover below France's costs at 3.6% of total expenditures. Revising Obamacare by implementing Medicare administrative practices can greatly help the disentanglement of medical bureaucracy, lowering operating expenses and simplifying the experience for the consumer.

For the U.S. to be reflective of the French healthcare system, it is also critical for the U.S. to implement a policy to start lowering the costs associated with administering the medical payment system. This could easily be accomplished by utilizing a Medicare system for all citizens. Additionally, for any the additional costs not covered by the universal Medicare system, patients should be allowed to carry a supplemental insurance, similar to Medi-gap. France has found it very efficient to use supplemental insurance programs to provide any missing benefits not covered in their universal program. Additionally, the U.S. needs to implement aggressive government bargaining with hospitals, pharmaceutical companies, and doctors. France has put much emphasis on bargaining, whereas the U.S. greatly lacks in this area. In some cases, the U.S. government is even prohibited from implementing bargaining system. One such example is with Medicare's Part D prescription insurance. The U.S. Government is explicitly prohibited from bargaining for lower drug costs associated with the Medicare Part D plan.

By emulating the French cost and quality of health care, the U.S, health care private industry will be brought to become efficient and competitive. Otherwise, price controls and other regulatory measures may be imposed to cure the problem, and the implications of such approaches are very broad and deep in ideological terms. It may do away with private health care insurance companies and impose strict control on pricing of pharmaceuticals, hospital, and physicians. In other words, providers in the health care industry would have to be viewed as a natural monopoly and therefore must be controlled just as utilities prices are currently controlled under a formula of cost plus reasonable return. There is in deed no other alternative for the U.S. except to go back to the mid-'80s and adjust the health care costs downward or to match the health care cost of the French system.

Other elements of the "Manifesto For U.S. Health Care Reform" include changing the culture and attitudes of the physicians. The same rule must apply to hospitals and drug makers. Rather than putting any focus on becoming successful capitalists and entrepreneurs in the health care professional, they need to be put more emphasis on primary loyalty and responsibility to patients care. For example, in France the average primary care physician's salary was $95,892, compared with $186,582 in the U.S. This is nearly double for a physician providing the same services, yet physicians in France on average are required to complete more years in medical school while still remaining loyal to patients. The honor of being a physician in France is above and beyond that of entrepreneurial goals, as is clearly demonstrated with their acceptance of a sensible salary.

While Obamacare may not be replicating the French health care system, it seems that its goals are similar, but unfortunately remain unaffordable. Therefore, it is necessary for its policies to promote those goals and make them affordable. By enacting policies regulate the aforementioned issues described in terms of the "Manifesto For U.S. Healthcare Reform", and by creating a Medicare program for all citizens through the Affordable Care Act, it is possible for Obama to decrease the cost of health care to the public. Thus making it more accessible and increasing the number of U.S. citizens that may gain access to universal health care.