New data from the White House Council of Economic Advisers suggests that President Obama's Affordable Care Act isn't having the detrimental effect on workers some feared it would.

According to the White House, nine out of 10 jobs that have been created since Obamacare became law in March 2010 have been full-time positions. Furthermore, there's no evidence that employers are cutting back worker hours to less than 30 hours per week, which is the threshold the health-care law uses to define a full-time position. (Story continues below chart) 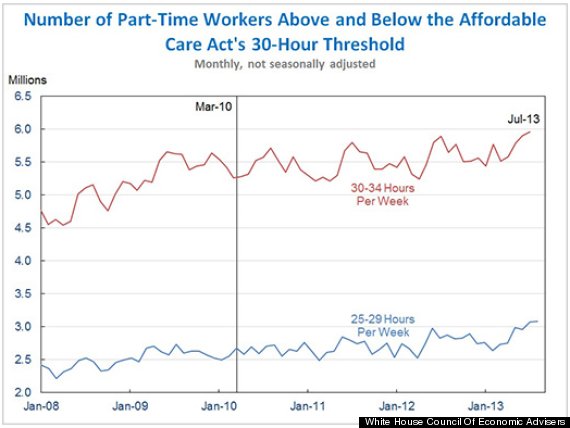 The White House data released Friday is the most recent evidence that many of these concerns were overblown.

In May, a poll conducted by the International Foundation of Employee Benefit Plans, an organization of human-resources professionals, showed that despite concerns about rising health-care costs, more than two-thirds of companies definitely plan to offer health benefits to full-time employees. The same poll found that only 0.5 percent of companies said they would definitely discontinue health benefits.

Many restaurant chains such as Wendy's, which initially predicted Obamacare would cause a spike in operating costs, have since cut back their estimates of what the health-care law would cost, according to the Wall Street Journal.

Last year, Darden Restaurants, which owns restaurant chains including Olive Garden and Red Lobster, said it was going to make more workers part-time in an effort to skirt the law, but later backtracked on that plan due to public backlash.

That said, other restaurant chains such as White Castle say they are considering only hiring part-time workers to cut costs in light of the law.