Remember when Obamacare was a terrible deal for young adults, and how "young invincibles" didn't even want health insurance? Conservative groups -- acting, no doubt, out of deep concern for the well-being of the nation's 20-somethings -- even staged events where young people burned their "Obamacare cards" (there is no such thing).

The key part of this narrative was that young adults would shun Obamacare. This would then leave health insurance companies and taxpayers holding the bag when only old and sick people got covered under the new program and run up huge medical bills, leading to a catastrophic "death spiral" that would destroy the private health insurance market. What a terrifying nightmare!

Instead, this is what happened: 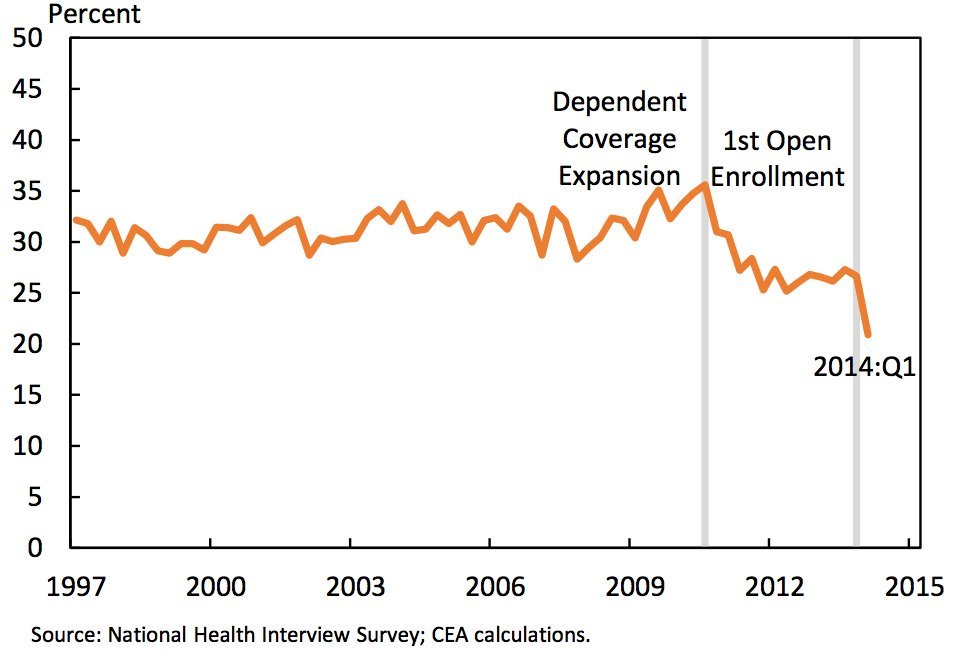 Not so scary, after all.

That's right: The share of the population between 19 and 25 years old without health insurance has fallen since the Affordable Care Act passed in 2010. That year, the uninsured rate for that group was more than 30 percent. By the end of this March, it had fallen to 21 percent, according to Centers for Disease Control and Prevention survey data presented in a report the White House Council of Economic Advisors released Wednesday.

In fact, the uninsured rate fell more for young adults than any other age group from the end of 2013 to the close of the first quarter of this year, the CDC survey found. And that doesn't even account for a surge in Obamacare enrollments at the end of March and early April, especially among younger people, for insurance coverage that didn't kick in until April or May. Turns out, people under 30 also think having health insurance is a good idea.

Sort of hard to square these findings with, say, this from February 2013: 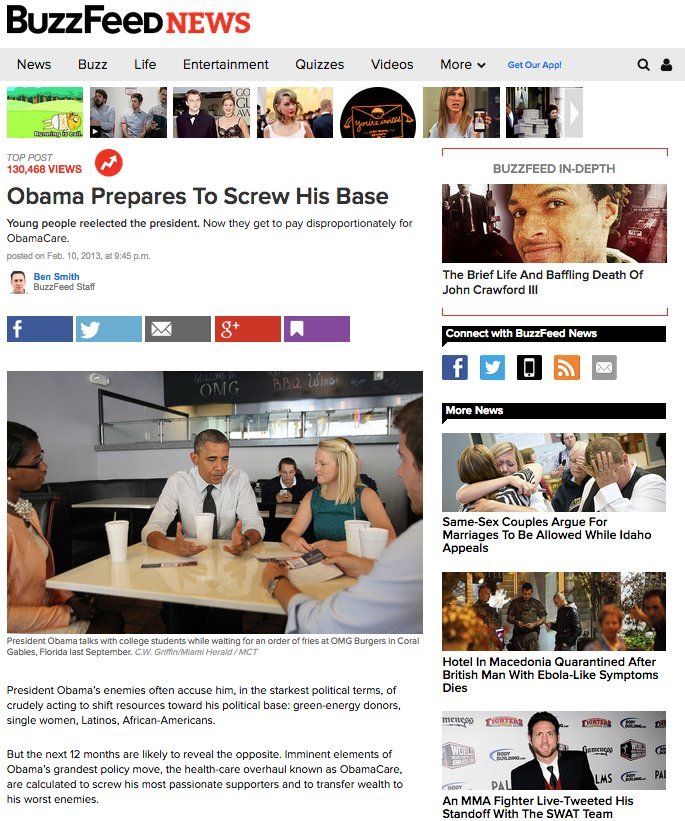 And although young adults don't make up as many of the 7 million-plus people enrolled in private Obamacare plans as the administration wanted, the new health insurance exchange marketplaces seem to look appealing enough to health insurance companies. On average, premiums will rise 6 percent next year, according to PricewaterhouseCoopers, which is in line with or below historical increases. And more insurers are joining the Obamacare exchanges.

Sure, these numbers are being touted by the White House, which has a vested interest in spinning such things. But survey after survey after survey has shown that Obamacare made a big dent in the uninsured rate. According to Gallup, it's the lowest it's been since 1997, at 13.1 percent.

To be fair, it's totally true that Obamacare brought with it big changes in the health insurance market for young adults.

On the plus side, parents can keep their children on their family insurance policies until they turn 26, which appears to have had a real effect on the uninsured rate for young adults starting in 2011. And young adults have access to the same guaranteed benefits, coverage regardless of pre-existing conditions, and financial assistance to obtain health insurance as everyone else.

The big downside is that the Affordable Care Act allows health insurance companies to charge older customers no more than triple what they charge younger policyholders, which would tend to increase premiums for young people, who presumably are healthier and use less medical care. That problem is mitigated at least somewhat by the availability for subsidies for low- and moderate-income people. That's good, because young adults tend to earn less than older people. But price can still be an issue, especially for those who rarely visit the doctor and might not see the value in paying a premium every month.

(Let's compare that situation to job-based health insurance, which is the most common form of health insurance in America. For large-group insurance, everyone pays the same price, no matter how old or young, sick or healthy. If Obamacare is a bad deal for young adults, employer health benefits seem even worse.)

And one study even found that young adults actually were healthier after Obamacare benefits kicked in. That's a funny definition of "screwed."