Our economy is broken. There's one economy for the wealthy, and another for the rest of us. This division has been worsened by the behavior of corporate executives who manage their corporations for short-term personal gain, rather than for long-term fiscal soundness.

Could a "secret trick" help change that?

This "trick" is reviewed in a new report from the Institute for Policy Studies (IPS), written by Sarah Anderson, Sam Pizzigati, and Marjorie Elizabeth Wood, and it comes from what they describe as "a most unlikely source": Obamacare.

CEOs and other executives are overpaid nowadays by any reasonable standard. To make matters worse, taxpayers are footing a large part of the bill. Thanks to some historical lobbying and maneuvering, corporations are able to deduct much of the money they pay to their most highly compensated executives.

We can blame corporate CEOs for selfish, shortsighted, and greedy behavior, and we should. But that misses an important point: government policy actually encourages them to behave that way. In one of its lesser-known provisions, the Affordable Care Act limited these tax breaks for health insurers who benefit from the law. While that may sound arcane, the implications could be profound and far-reaching.

It's not that the ACA is an ideal law. Far from it. Among other things, it's a boon for for-profit insurers (hence, presumably, the IPS's use of "unlikely"). Insurance companies have certainly benefited from many of its provisions. Enrollment in for-profit plans has increased significantly. Health insurance stocks have surged since the ACA took effect, as this chart illustrates: 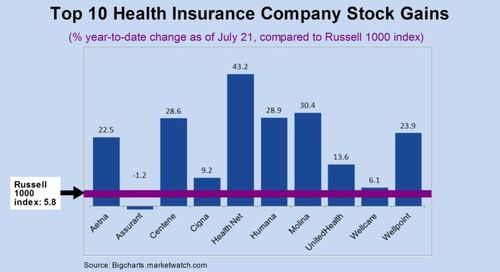 Medical providers have seen some gains, too. While there have been some limitations on provider reimbursement, hospitals are receiving more income for emergency room visits. Pharmaceutical sales are likely to keep rising, although the Federal government -- the largest purchaser of pharmaceuticals in the nation -- is still forbidden to negotiate price discounts with drug companies.

The individual mandate is a challenge for many households. Union members and others with decent health care will lose out under the law's naïvely-designed excise tax on higher-cost plans That's a Republican idea which the President originally campaigned against, and which was then included in the ACA at his Administration's insistence. This ill-conceived provision will soon punish people for health care expenses which, contrary to Beltway folk wisdom, is largely driven by health status rather than "Cadillac benefits." (See here and here for more.)

These problems may may eventually lead the nation to conclude that we need deeper and more comprehensive reform, the kind which doesn't rely on private-sector corporations to provide our medical care.

But for all its flaws, the ACA has its merits. The Medicaid expansion provision, while imperfect in its design, has provided urgently-needed health care coverage to millions of Americans (where it hasn't been blocked by intransigent Republican governors, an outcome which was all but inevitable). It's entirely possible that the law is helping to slow down the rate of increase in our nation's health care costs, although they are already intolerably high.

The IPS study has now shed some light light on another positive aspect of the law. The ACA lowers the cap on the deductibility of executive compensation from $1,000,000 to $500,000 per executive per year; eliminates the exception for stock options and other forms of "performance-based" pay; and extends the cap beyond senior executives to all highly-paid employees of the firm.

To be sure, the revenue collected by ending this tax break is relatively insignificant. The IPS estimates that the top ten health insurers paid an additional $72 million in taxes last year. The provision is expected to bring in an additional $1 billion over the next ten years. Those aren't big dollars in Washington terms.

But, as the IPS study rightly points out, the real significance of this tax lies in the model it offers for the entire corporate economy. First, there are the direct tax benefits. As the IPS points out:

"If the Obamacare executive pay tax provision applied to all major US corporations ... taxpayers would save $50 billion over the next 10 years."

That's a significant improvement to the government's bottom line. This revenue could be used to create jobs, educate children, rebuild our infrastructure ... even deliver added health care services.

But the greatest economic benefits would come from changing the perverse incentive structure which currently drives executive compensation in this country. That could profoundly improve our economy. Here's why: The public's last wave of outrage over executive pay led Congress to impose limits on the tax deductibility of the pay a corporation gives to its top for executives.

But, as the IPS study explains:

"In reality, the 1993 tax deductibility cap came with a huge loophole ... that has essentially rendered the cap meaningless ... corporations can simply declare the stock rewards they lavish on executives 'performance-based' and then go on to deduct the many millions involved as a basic business expense."

The end result was a move from relatively straightforward pay packages to "ballooning" compensation which increasingly centered on exorbitant stock options and grants. Since these packages were usually decided annually, their "performance" aspect encouraged executives to focus primarily on short-term gains in stock prices. That, in turn, led executives to abandon long-term concerns about financial viability in favor of maneuvers that could spike the stock price -- and therefore their personal compensation -- on a much shorter time frame.

Those maneuvers are frequently reckless, and often fail to address the interests of all company stakeholders -- a group which includes customers, shareholders, and common stock holders. These "performance" packages have become so divorced from actual performance that, as the IPS study reminds us, "CEOs at 63 S&P 500 companies won 'performance pay' increase in 2012 at the same time their corporate share returns were underperforming their ... peers."

Expanding the ACA's executive-pay provision to all companies, and improving its design even more, would begin the process of removing senior executives' incentives to put their companies at risk and disregard the needs of employees and customers.

The IPS study performs an additional valuable service by summarizing some of the domestic and foreign proposals for curbing executive pay and correcting the perverse incentives in the current system. They grade these proposals on four simple principles:

While there is no space to review all of them here, the ideas which IPS has gathered are valuable and insightful. This kind of reform already enjoys broad, bipartisan support. Republican Rep. Dave Camp has offered a similar proposal, as has Democratic Rep. Barbara Lee. Lee's proposal would also deny tax deductions for any executive pay which is more than 25 times the amount paid to a firm's lowest-paid worker.

Such moves would certainly be popular with voters. As the authors note, polls show that 63 percent of Americans want to "prevent corporations from avoiding taxes when they award their executives millions in stock options."

To be sure, health insurance corporations have not improved their behavior substantially as a result of this law, at least so far. They are still overpaying their executives. UnitedHealth, which will increase its Medicaid enrollment by a projected 800,000 this year, is the most egregious over-payer of senior executives. WellPoint used tax dodges to skirt the first year of this law. But a comprehensive reform of executive pay could make this kind of misbehavior harder to pull off -- and it would mean taxpayers no longer have to foot the bill for a system which encourages mismanagement and greed.

Obamacare's "secret trick" won't single-handedly fix our economy or end our nation's epidemic of executive misadventure. But it's an excellent idea, and the Institute for Policy Studies is using it the right way: to start a much-needed national conversation about reforming executive compensation.