WASHINGTON - The tax deal reached between President Obama and congressional Republicans could mean a higher tax bill for roughly one in three workers as a result of the Social Security tax cut Republicans pushed as a replacement for the current Making Work Pay tax credit.

The Making Work Pay credit gives workers up to $400, paid out at 8 percent of income, meaning that anybody making at least $5,000 gets the full amount -- and gets as much as anybody else. Its replacement knocks two percentage points off the payroll tax cut, meaning a worker would need to make $20,000 to get a $400 break. Of the nation's roughly 150 million workers, around 50 million make less than $20,000 and will see at least some increase as a result.

Additionally, roughly a quarter of 20 million state and local workers pay no payroll tax, because they have a separate pension system. Some of those workers with children will benefit from the extension of other tax credits, but overall will have less money in their pocket.

Rep. Raul Grijalva (D-Ariz.), co-chair of the Congressional Progressive Caucus, said many House liberals were opposed to the payroll tax cut because of its effect on the poorest workers. Progressives are also concerned that the tax cut will become permanent and undermine Social Security's funding stream and political support over time.

Senior White House adviser Larry Summers told reporters on Wednesday that the GOP wanted to replace Making Work Pay with the payroll cut. "It came out of the process of compromise with the Republicans who were more attracted to the payroll tax holiday concept, and that was a proposal that, as had been coming out of here, we had been giving considerable thought to in the context of the President's budget," he said.

White House officials have said that the situation must be viewed in the context of the entire package and that Republicans strongly resisted extending the refundable tax credits, such as the child tax credit or earned income tax credit, that will more than offset the loss of MWP for many workers. Had those credits expired, lower income workers would have been worse off.

House Democrats, in their package, did not extend MWP, so, in that sense, the White House proposal is more generous. Making Work Pay is a more effective stimulus, economist Dean Baker said, because a higher proportion goes to the poorest workers, who are most likely to spend it immediately. "Dollar for dollar, undoubtedly, Making Work Pay is going to be more stimulative. The higher-end people will get five times as much than someone earning $20,000," said Baker, of the liberal-leaning Center for Economic Policy and Research.

Summers, asked by reporters about the effect on poorer workers, conceded that they would suffer slightly under the payroll tax cut as compared to Making Work Pay, but said the other tax credit extensions would balance it out or make the family better off. And if GDP goes up by one percent, he said, "that's $2,000 for the average family." Of course, wealth is not distributed to each family equally in the United States, so the poorest are very unlikely to see as much of a benefit from economic growth as the wealthiest.

But the extensions of the tax credits, ultimately, are merely extensions, so workers won't see a change in their income like they will see the change as a result of the change from Make Work Pay to a payroll tax cut.

"It is just kind of an absurdity that we're making so many low income and moderate income workers suffer as a result of a downturn that was brought about by Wall Street greed and incompetence," Baker said.

The White House, meanwhile, is circulating a chart comparing "What We Got" and "What They Got," making the case that Democrats got much more, with the "We Got" stack roughly doubling up its rival. But, noted Rep. Donna Edwards (D-Md.) after Thursday's Democratic meaning, the payroll tax cut could just as easily go in the Republican side.

And if the temporary Democratic victories expire and the tax cuts for the wealthy are extended, the chart looks that much redder, as put together here by MoveOn.org in response to the White House. 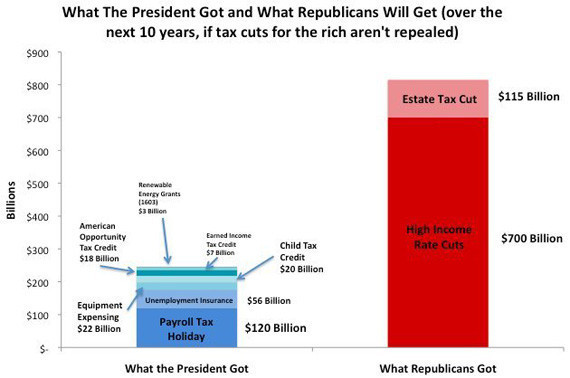