WASHINGTON -- A batch of new national polls released this week share a similar theme: All show a fade of the modest "bounce" in President Barack Obama's approval ratings that occurred just after the killing of terrorist Osama bin Laden in early May. For the moment, however, HuffPost Pollster's trend estimate -- based on all readings of Obama's approval -- remains slightly higher now than it was in late April and throughout much of 2010. 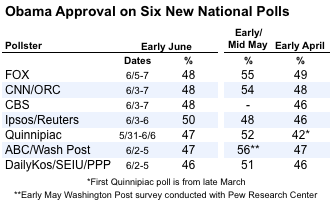 Plotted on a chart, the data show the same rise and fall on most of the surveys in the past two months: 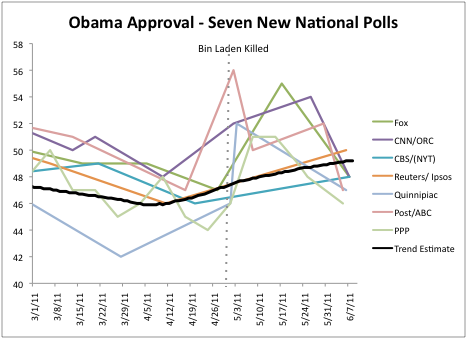 Notice, however, that this chart includes the bold, black HuffPost Pollster standard trend line. This estimate is an analysis of all available polls using local regression, a statistical procedure that creates a smoothed line when data points are scattered. The line is designed to resist "chasing" noise in poll results (which may sometimes be the result of random sampling error or "house effects" and differences in methodology rather than real movement in the polls).

In this case, the trend line appears to mostly ignore the apparent spike in many of these surveys in mid-May and indicates a continuing upward trend. Five of six most recent polls (again, all but Reuters/Ipsos) now plot just below the trend line.

The smooth upward trend estimate line remains, partly because the two daily tracking polls have not demonstrated the same rise and fall pattern in May and June as the other national surveys. These far more frequent daily trackers have a greater impact on HuffPost Pollster's trend estimate. The Rasmussen automated poll rose after the bin Laden killing and has remained relatively stable since, while the Gallup Daily tracking poll showed a much deeper dip than the others in mid-April. Both show Obama's approval rating remaining at a slightly higher level now than before the successful bin Laden mission. 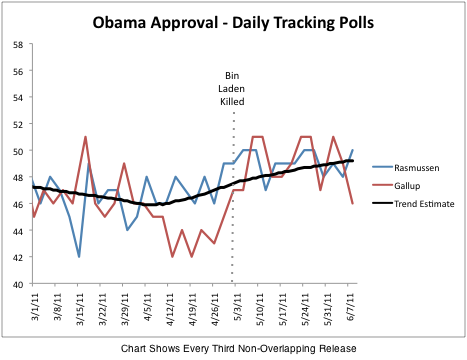 There are times when the standard HuffPost Pollster trend line can be too smooth and miss real changes in public opinion. We can adjust the local regression to make it more sensitive.

Doing so in this case appears to provide a better illustration of the recent trends across all of the surveys. The more sensitive red trend estimate line in the chart below, for example, shows both the rise in mid-May and the modest decline since. 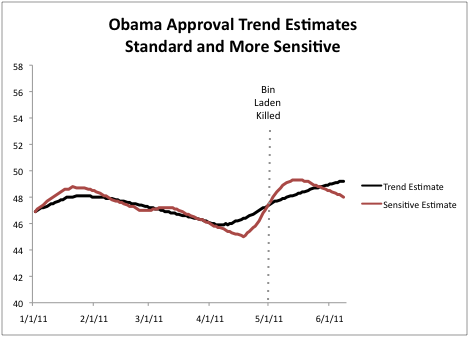 Even our more sensitive estimate still puts Obama's approval at 48 percent, which is very close to the heights it reached in Jan. 2011 following the president's State of the Union address and his speech after the Phoenix shootings. Obama's approval was lower throughout the summer and fall of 2010. Our trend estimate showed Obama's approval at roughly 45 percent from August through late Nov. 2010. 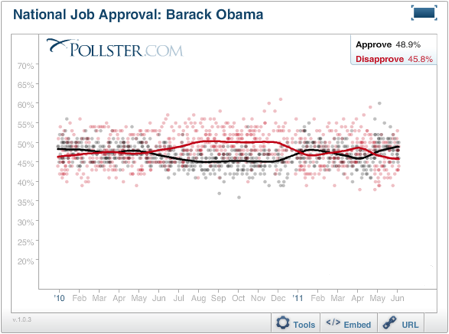 Of course, these readings are just a current snapshot, and the downward trend may continue. Or the overall political environment may have changed since the 2010 elections in a way that slightly benefits Obama.

But these data strongly imply that the successful bin Laden commando raid has not radically shifted overall perceptions of Obama's job performance.

One explanation is that foreign affairs, terrorism and the wars in Afghanistan and Iraq are not dominating the our news and political environment the way they did just a few years ago.

The bin Laden breakthrough did alter perceptions of Obama on his handling on those issues. Data from the USA Today/Gallup survey conducted in mid-May showed a big spike in Obama's ratings on terrorism (+15 percentage points), the situation in Afghanistan (+6) and foreign affairs (+5) but slight declines on the economy (-2) and the federal budget deficit (-1). And since news about the bin Laden story remained on the minds of Americans during much of the month of May, these shifts probably helped fuel the momentary bump in Obama's overall rating. 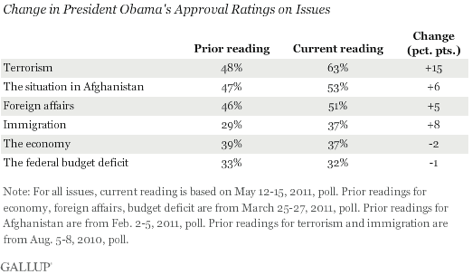 Obama's approval rating on the economy (37.7 percent), as tracked in the HuffPost Pollster trend estimate chart, remains much lower than his overall rating (48.9 percent). Thus, as economic news dominates, and especially as more Americans begin to hear mostly bad news about the economy, Obama's ratings may well see further declines. 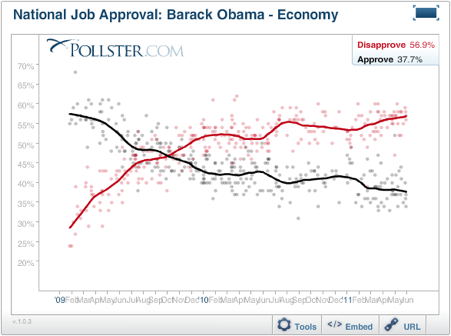