Mayhill Fowler wrote yesterday about the

blue postcards advertising Barack Obama's appearance tomorrow at the Siegessaule....Yesterday and today volunteers from Americans Abroad for Obama, as well as college students...have been plying Berliners and tourists with these rather bizarre cards -- the artwork reminiscent of both German Expressionism and Soviet Constructivism in its depiction of a frowning Barack. Is the Obama brow wrinkled in thought? Is the Senator squinting at the future? Or is he hectoring an audience? Take your pick. [emphasis mine]

Mayhill can be a little too sure of herself, sometimes. What both she and The Atlantic's Marc Ambinder fail to recognize -- or even to consider, apparently -- is that the design of any effective card or flyer or poster starts with a couple of basic questions: Who am I trying to reach, and what's the best way to reach them? The answer to the first question being "Germans," in this case, Obama's savvy design team answered the second question by paying subtle but conscious tribute to the Bauhaus movement of the 1920s -- a German movement which found expression in German graphic design (among so many artistic and architectural endeavors). By employing Bauhaus-inspired graphic cues, the Obama campaign was tapping in to the German cultural psyche -- speaking to Germans in a design language that is familiar to them. That was smart. After all, it's the Germans the campaign was trying to draw to the Tiergarten today -- not Mayhill Fowler or Marc Ambinder. 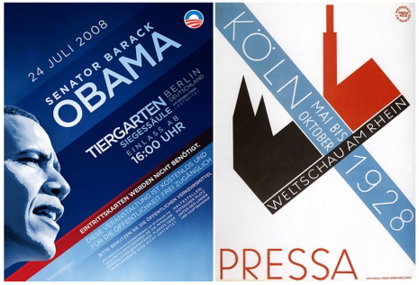 With his speech today, Obama will be offering himself as a leader who can repair the damage George Bush has done to the friendship between Europe and the United States, and will be reminding the world of the importance of that alliance. So it's also worth recalling that the reverberating influence of the Bauhaus movement was, in the 1950s and 60s, a key impetus in the development of the American skyscraper by Ludwig Mies van der Rohe -- a development which was itself a signal moment in the accelerating internationalization of American culture in the postwar period.

There's a really thoughtful item about some of this over at Meaningful Distraction -- including an image of Obama's Berlin poster alongside images of two Bauhaus posters from 1923 and 1928.

Many Germans will recognize this little tip-of-the-hat, and those that recognize it will appreciate it. This type of move wouldn't even occur to the McCain campaign, despite the fact that McCain was born around the time when German Bauhaus was all the rage.

Thanks to Meaningful Distraction for the image.