I was going to write about Legitimate Grievances today, but something more important has come up: Obama's Choice. 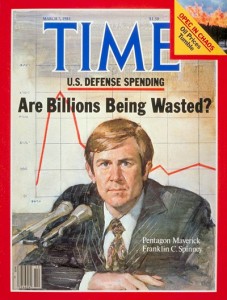 Context first. My friend and colleague for the past decade, Chuck Spinney was and remains a reformer. He was featured on the cover of TIME Magazine in the 1980's, and I am including that graphic here because I think it is very important for the public to understand that NOTHING HAS CHANGED since the 1980's. We still have the same two-party tyranny that has sold out to Wall Street, we still have the same Military-Industrial-Congressional Complex (MICC) that moves wealth from the individual taxpayer to the top 1% of our citizens, who have hollowed out America without regard for the Constitution, the Republic, or the Commonwealth. Below is a note Chuck sent me, a short snippet and pointer to the New York Times article to which he refers, and my comments with a few links.

New options from the nomenklatura listed below is a silly oxymoron.

WASHINGTON -- With critical decisions ahead on the war in Afghanistan, President Obama is about to receive an unusual opportunity to reshape the Pentagon's leadership, naming a new defense secretary as well as several top generals and admirals in the next several months.

It is a rare confluence of tenure calendars and personal calculations, coming midway through Mr. Obama's first term and on the heels of an election that challenged his domestic policies. His choices could have lasting consequences for his national security agenda, perhaps strengthening his hand over a military with which he has often clashed, and are likely to have an effect beyond the next election, whether he wins or loses.

That is all the more reason that Mr. Obama's choices are certain to face scrutiny in a narrowly divided Senate, whose Republican leadership has declared itself intent on defeating him.

Defense Secretary Robert M. Gates has said he plans to retire next year, while the terms of four members of the Joint Chiefs of Staff are scheduled to end: Adm. Mike Mullen, the chairman; Gen. James E. Cartwright, the vice chairman; Gen. George W. Casey Jr., the Army chief; and Adm. Gary Roughead, the chief of naval operations.

Phi Beta Iota: The current and prospective leaders being discussed and considered are all inter-changeable. They share the same paradigmatic views, the same commitment to the military-industrial-congressional complex (MICC), and therefore, to suggest that changing out the guard is in any way an option, is to demonstrate profound naivete or a gift for deception. President Obama is truly at a historic fork in the road: he can go on with business as usual, bailing out Wall Street and carrying on with a global military campaign that is both ineffective and unaffordable-or he can reach deep down and come up with one startling insight and two serious options.

Startling insight: integrity matters. Doing the right thing is more important than continuing to do the wrong thing righter.

Option A: Make Electoral Reform (1 Page, 9 Points) the issue. That will neturalize the two-party tyranny and restore the Republic WHILE EARNING HIM A SECOND TERM.

Option B: Hold an Open Space Technology event on the future of the USA in all its forms, in the Washington Convention Center, a no-notice open public event, with Harrison Owen as the facilitator.

Sadly, we are quite certain neither the startling insight nor either of the two options will be considered. The Titanic is sinking and the President is being asked to re-arrange the name cards for dinner.....thus does the Republic flail in the tar pit of history.

We predict, with a depth of despair, that Obama will choose to go along and eventually be as wealthy as Bill Bradley and Al Gore. He is one phone call away from greatness, and won't do it. He lives, we die.