No, we're not done talking about her.

Sen. Hillary Clinton's official moment in Denver is over. Her Tuesday night unity performance drew rapturous applause from Democratic delegates and supportive analysis from the punditocracy. The most consequential Clinton question, however, is whether any of it matters.

Howard Wolfson, a former strategist for her campaign, thinks Obama may get a bounce among women in polls next week. He told me that Clinton essentially hit every key point for Obama in her speech, so skeptical female voters may move in his direction. (Following the convention's interdependent spirit, we were talking at a Tuesday night party hosted by his consulting firm, the Glover Park Group, and Politico, where I write a column.) If those voters are driven by policy, Clinton's references to health care, foreign policy and pay parity will surely help. Yet for voters who doubt Obama on more personal terms -- his experience and "character" -- Clinton's argument was much thinner.

[T]here was one big flaw in the pitch: Clinton never made the case that Barack Obama was ready to lead as commander in chief. That was her strongest argument against Obama during the primary -- so strong the McCain campaign is recycling her ad about the president answering the phone at 3 a.m.

Clinton did reject the McCain ad in her remarks to the NY delegation on Monday, to be fair. But her convention speech definitely fell short on detailing a personal case for Obama as the right person for the job. That's the core issue for the remaining voters -- from skeptical women who normally vote Democratic to undecided independents. After all, if policy preferences settled the presidential race, the Democratic nominee would hold a huge lead, given public opinion on the war, economy and the incumbent administration.

Forget the fact-free cynicism about how conventions are irrelevant. Convention speeches are actually one of the only avenues for the parties to directly reach millions of voters with an extended argument -- without the media filter or commercial soundbites. Over 20 million tuned in to hear the Democrats on Monday night alone. There's no Nielsen data on the viewers' voter preferences, of course, but it's a good bet that Clinton's Tuesday speech drew more undecideds and Obama-doubters than the average convention programming. So while her heartfelt address was still a net gain for Obama, it offered little to those voters who don't like him, or don't think he's ready.

Now some pols hope Bill Clinton will take up that task on Wednesday night. His official letter to delegates in the DNC program barely mentions the O-word, however, and he famously deferred to the Constitution's formal requirements when asked to vouch for Obama's presidential qualifications.

In the end, the bobbing blue "UNITY" signs still fill the Pepsi Center, and most of the delegates I've seen are more united than cable news coverage would suggest. Clinton's speech should help the cause, and now it's up to the people actually on the ticket, Obama and Biden, to fill the hole that she left. It's not enough to show voters that they agree with Obama on most major issues. People want to know they can trust him. They want to feel, to borrow a tacky campaign slogan that came up short, that he's ready to lead on day one.


On a break from campaigning in Montanna, Barack Obama watches Hillary Clinton at the Democratic National Convention on Tuesday. 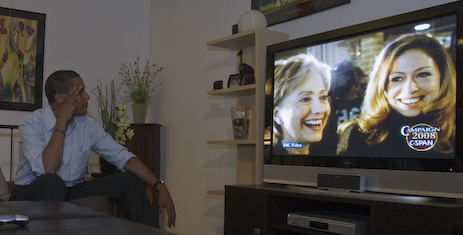