For all of the analysis, parsing, and knee-jerking from Obama's address to the Muslim world, there was one detail that seemed to bypass the pundits.

Obama acknowledged the U.S. role in the 1953 coup of Iran, when the CIA worked to overthrow a democratically-elected secular leader, Mohammad Mossadegh. This isn't fringe conspiracy theory, this is a widely known history (not so much stateside). And it is an all-time chart-topper on "Why They Hate Us." 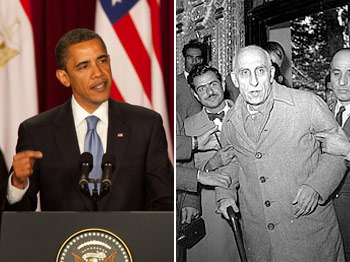 In 1951, after British oil interests refused to pay Iran an equal share of their revenues, Mossadegh nationalized the oil industry and took back the reins to his country. After embargoes and blockades against Iran failed to return oil control to the British, Kermit Roosevelt, Jr., grandson of President Theodore Roosevelt and employee of the Central Intelligence Agency, devised a new approach: Operation Ajax. Through bribes and bargains, locals staged scenes posing as dissidents and malcontents, while the media would be used to stir Mossadegh's ousting. While Mossadegh would die in confinement, the autocratic and oil-friendly Shah Mohammed Reza Pahlavi was restored to power.

Until the 1979 Revolution. Iran's leader being installed by foreign interests never sat well with the Iranians. As such, the theocratic radicals held a nationalist high ground when Ayatollah Kohmeni took over the government. And as long as I was old enough to remember after that, Iran seemed scary.

This is an example of how short-sighted greedy goals end up causing long-term world problems. If Iran was not alienated from Western nations, how different would our geo-political world look today?

Obama's acknowledgment was not an apology: "In the middle of the Cold War, the United States played a role in the overthrow of a democratically-elected Iranian government." This suggests that not only is Obama aware of what the CIA has done in Iran, but other countries since.

In the best-selling memoir, Confessions of an Economic Hit Man, John Perkins details his career of predatory lending to Third World governments on behalf of American-backed businesses. The example of Mossadegh proved particularly persuasive to leaders unsure about opening up their country to U.S. industries. Perkins and others have more to say on skullduggery in the name of empire than myself -- even Kermit Roosevelt, Jr., wrote a book in 1979 about how he did it, Countercoup: The Struggle for the Control of Iran. But there is presently a powerful parallel at play in Peru:

Villagers in the Amazon have long been exploited by oil companies that pollute their land, violate agreements, and harm the locals. The new president of Peru, popular with the petrol peeps, wants to open up to 60% of his country for oil drilling and logging. As the local issues throughout the jungles have been ignored, villagers have organized, demonstrated and stopped work at the oil refineries. Their strike is being fought by the police, who have been having deadly clashes with thousands of protesters and villagers over the last week. These people were suffering in a different jungle than the one where some jerk on a reality show was complaining about his fame being devalued.

Obama is the first president to acknowledge the U.S. subversion of a democratically-elected Iranian government, but he can still do better. Hegemony has left many scars around the world, and Peru is just one of them. Obama may not be able to foil a game as old as empire, but as President he can -- and should -- do something to help stop the bloodshed and refinery strikes in Peru.