President Obama kicked off his 2012 campaign last week by releasing a video and website urging supporters to "Get In" early. The site sports a handsome new design direction in line with Obama's predicted 2012 messaging: it's mature and stately, but accessible. Gone are the sleek lines and gleaming buttons of the brash 2008 site, replaced by fuzzy textures and cozy typography.

The campaign's continued emphasis on design as a political tool is an obvious carryover from last election, when Obama dominated the brand battle. Especially compared to the McCain campaign's tired and outdated look, Obama's visual style read instantly as "Change," clearly aligned to his overall messaging. It was a stunning marketing job and a significant factor in his victory.

"It wouldn't have been the same election without the design," says Aaron Perry-Zucker, a then-senior at RISD who founded designforobama.org, a web application that collected posters from pro-Obama designers and formatted them for easy downloading and printing. Launched in just a week, the site garnered hundreds of submissions from around the world and was spun off into an art book edited by Perry-Zucker and filmmaker Spike Lee.

Design historian Steven Heller wrote during the campaign that "never, as far as I can tell, in the history of presidential campaigns has such a huge outpouring of independent posters been created for a single candidate. This election's poster child is definitely Barack Obama." Merited or not, the Obama campaign so galvanized designers that it created a full-fledged visual movement more typical of a revolution than than election.

The visual characteristics of the Obama brand became trendy, and remain so. The sweeping gradients and subtle shadows of Obama's 2008 site and the new whitehouse.gov were not new, but atypical, and Obama's look propelled those trends to prominence. The campaign's favored typeface, Gotham by Hoefler and Frere-Jones, was recently acquired by MOMA along with 23 other "New Faces". McCain's oft-used Trajan, typical of movie posters, gravestones and memorials, was not.

"Picking Gotham over Trajan is clearly a hip move, showing that you know something about the design zeitgeist, about the evolution of typography, and going with something that feels modern and clean," Perry-Zucker says. The typefaces, featured prominently in the endless torrent of campaign ads ran by both sides during the race, contributed greatly to the perceived character of each candidate. Trajan versus Gotham encapsulated how the public ultimately judged the election: old versus young, tired versus fresh.

The McCain campaign's poor design choices, especially on the web, contributed significantly to McCain's overall failure to connect effectively with swing voters. Obama's 2012 opponent will not make the same mistake.

Strong political messaging is nothing new: star ad planners have been working with candidates for decades. But prior to 2008, a minimum standard of visual style was acceptable. With the average American's life increasingly lived online, and with campaigns fought more and more through social media, design is only growing as a political tool.

A voter's first introduction to a candidate is increasingly made online, and that initial impression creates a powerful touchpoint that will persist to election day. Elections are no longer fought at train stations and town halls. Design is the new handshake. 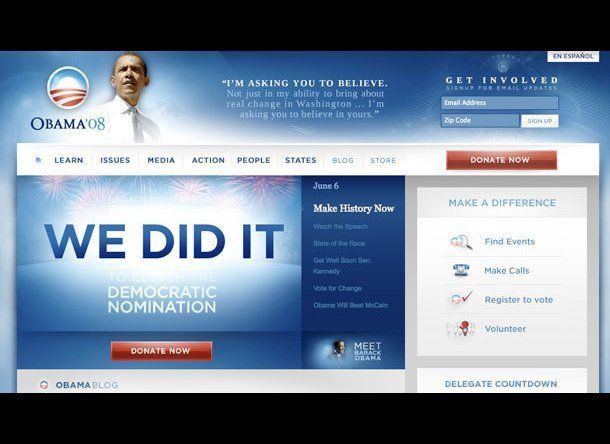