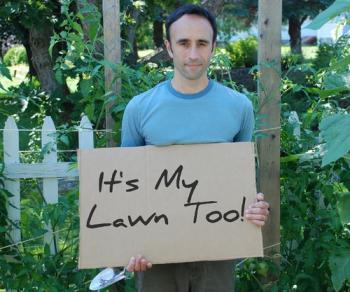 Faithful followers of Obama Foodorama, the food politics blog whose house specialty is a perfect blend of substance and froth, were treated to an especially tasty scoop yesterday--the news that there will, indeed, be a vegetable garden at the White House.

As they say in my native San Fernando Valley, OMG. This turn of events is not just epic, it's biblical: ask, and ye shall receive.

I'm not talking about the slacktivists who sit around railing and wailing, "why bother?" I refer, rather, to the asktivists like Roger Doiron, the founder of Kitchen Gardeners International who looked at that vast expanse of lawn circling the White House like a gaudy green bauble and asked, "why not grow food instead of grass?"

Roger's the force of nature behind the Eat The View campaign, started just over a year ago in February, 2008. I first met Roger--a modest, affable fellow from Maine--at Manhattan's Union Square a few years back when he manned a table at the NYC Grows Garden Festival to spread the word about Kitchen Gardeners International. We had a great chat about urban ag and I've been a fan of his work with KGI ever since.

A couple of months after Roger started Eat the View, Daniel Bowman Simon, an NYU student who's working towards a Masters in Urban Planning, posted a query on a sustainable ag listserv asking:

"Has there ever been a concerted effort to get a President to plant a real food garden on the grounds? Is anybody here interested in participating in the 2008 version? Any thoughts are most welcome. I'm just an average joe with a big idea!"

OK, so he wasn't the first average joe with this particular big idea, but just as the 70's punk scene was big enough to accommodate the Sex Pistols and the Ramones, so, too, did the grassroots Victory Garden groundswell welcome these two campaigns.

Funnily enough, Union Square is also where I first encountered the WHO farm folks last summer when they parked their trademark topsy turvy bus at the Greenmarket last summer before embarking on their cross-country odyssey to promote the idea of a food garden on the White House lawn. The top of the bus hadn't been planted yet, so I brought them a bag of organic fertilizer to help them get growing.

These two endeavors were greeted by many as a quixotic quest, or, worse, a trivial distraction. But the Kitchen Gardener and the WHO Farmers persisted, and today, they're taking a victory lap on behalf of all us victory gardeners. So, yesterday, I asked Roger where he found the resolve to lobby tirelessly for the transformation of the White House landscape, and--proving yet again that if you ask, you'll receive--he kindly emailed me back:

Me: You lobbied tirelessly for the WH victory garden despite the cynics who said that (a) it would never happen, and (b) it's just a symbolic gesture that won't really mean anything. What motivated you to keep lobbying for a vegetable garden on the WH lawn in the face of all that skepticism, and what do you think it will mean?

Roger: My short answer to your question is that gardeners are good at delayed gratification. I stuck with the White House victory garden campaign for over a year for the same reason I stick with my own garden through fair weather and storms: because I knew the benefits would greatly outweigh the costs.

I know how my garden benefits me, my family, and my community and want to see those benefits extended to everyone who is prepared to roll up his or her sleeves and do a bit of digging. In pushing for a new garden at the White House, I knew that I was helping to plant the seeds not just of one garden, but the millions of gardens that one garden would inspire.

Gardens, for me, are a way of not only growing healthy children and communities, but also achieving social justice. They represent the democratization of the good food movement.

Although the White House garden campaign is winding down, the Eat the View campaign is just getting warmed up. Now that the Obamas are on board, we're going to be reaching out to other people and identifying other high-profile pieces of land that could be transformed into edible landscapes. Sprawling lawns around governors' residences, schoolyards, retirement homes, vacant urban lots: those are all views that should be eaten.

In thinking about my stick-to-itiveness, I also think that coming from Maine has something to do with it. Although Maine gardeners like me are short on frost-free days, we're long on the type of hope and patience that such an extended advocacy campaign requires. As proof of that, I'm about to get my first taste of parsnips I planted late last June, a feast nearly nine months in the making!