More than three-quarters of homeowners who have had their monthly mortgage payments reduced under the Obama administration's primary foreclosure-prevention program owe more on their mortgage than their house is worth, according to a new report by government auditors.

Over half of the roughly 170,000 distressed borrowers who have gone through the program are seriously underwater, meaning they have negative equity of at least 25 percent, the report shows, citing data through February. In other words, for every $1.00 their home is worth, they owe at least $1.25.

The average homeowner that's received a five-year modified mortgage under the administration's plan had negative equity of about 35 percent prior to the program, according to a Wednesday report by the Congressional Oversight Panel, a federal bailout watchdog. After modification, that burden actually increased for the average homeowner, who is now underwater by more than 43 percent, according to the bailout watchdog's report. Research shows that the more under water homeowners are, the more likely they are to fall behind on payments, default, or walk away.

But that data understates the problem, the report said. Those figures are for first-lien home mortgages only. Debt owed on junior liens, like second liens and home equity lines, isn't part of that calculation. The Obama administration estimated last April that "up to 50 percent of at-risk mortgages currently have second liens."

"If junior liens were to be included, the percentage would be significantly higher," the report notes. "The continuing deep level of negative equity for many HAMP permanent modification recipients makes the modifications' sustainability questionable; even with more affordable payments, deeply underwater borrowers may remain tempted to strategically default or may be compelled to because core life events, such as death, divorce, disability, marriage, child birth, job loss, or job opportunities necessitate a move."

HAMP refers to the administration's Home Affordable Modification Program, which seeks to lower troubled borrowers' monthly payments primarily through interest rate cuts. Strategic defaults occur when homeowners are able to make the payments, yet willingly choose not to and instead walk away from the mortgage. Recent research estimates strategic defaults are on the rise.

"Negative equity is the single most important driver of defaults," Laurie S. Goodman, senior managing director at Amherst Securities and a top mortgage bond analyst, said in February during a panel discussion at the American Securitization Forum's annual conference.

After months of sustained criticism -- including by the bailout watchdog and by Democrats in Congress -- the Treasury Department finally outlined a plan late last month that calls for principal reductions, which is the only way to address the problem posed by underwater homeowners. (Absent a rise in property values, the only way to give borrowers equity is to reduce the overall amount owed). But that plan doesn't kick in until the fall. Meanwhile, the foreclosure crisis does not show any signs of abating, the panel's chair, Harvard Law professor Elizabeth Warren, said during a Tuesday evening conference call with reporters.

"[T]he Panel has concerns as to whether the modifications make homeownership sufficiently affordable to avoid foreclosure, given borrowers' broader circumstances. As noted previously, the program...without considering the existence of junior liens, leaves borrowers still paying a significant percentage of their income for housing," the report notes. "This is particularly problematic because most HAMP modification recipients are underwater.

"This points to the problem with the lack of principal forgiveness in HAMP up to this point. Lack of principal forgiveness means that homeowners will continue to be underwater. It also means that more of each payment will be going to interest, rather than paying down principal, and it may mean that some borrowers have to pay for a longer period of time. All of these factors increase the re-default risk on modified mortgages, and to the extent that a permanent modification is not sustainable, it merely delays a foreclosure and the stabilization of the housing market."

Less than a quarter of eligible homeowners have converted from temporary trial modification plans into five-year plans, the report notes. Treasury originally forecast up to a 75 percent conversion rate. And while it's too early to tell the rate at which these modified loans will default, Treasury estimates a 40 percent re-default rate, the report notes, citing testimony from Treasury officials. The administration originally promised to help three to four million homeowners avoid foreclosure.

The panel estimates that in the end as few as 276,000 foreclosures will be averted. Last year lenders foreclosed on more than 2.8 million homes, according to real estate research firm RealtyTrac. The firm estimates three million homes will get foreclosure notices this year; more than one million of them will be repossessed by lenders.

"For every borrower who avoided foreclosure through HAMP last year, another 10 families lost their homes. It now seems clear that Treasury's programs, even when they are fully operational, will not reach the overwhelming majority of homeowners in trouble," the panel's report notes.

In an e-mail to reporters, Treasury spokeswoman Meg Reilly said that the department's latest monthly report on HAMP will show that more than 230,000 homeowners have transitioned into five-year modification plans. Additional 108,000 have been approved and are awaiting borrower acceptance. The report is expected to be released Wednesday, Reilly wrote.

One issue that's been pondered by investors and housing analysts, but hasn't been fully addressed by policymakers is the supposed backdoor-bailout nature of the HAMP program. While it's supposed to help homeowners, many have criticized its design as benefiting the mortgage servicers instead. The four biggest mortgage servicers are the four biggest banks -- Bank of America, JPMorgan Chase, Citigroup and Wells Fargo -- and taxpayers pay them for every successful modification. Also, because those modifications rely primarily on interest rate cuts, rather than principal writedowns, they end up increasing troubled homeowners' amount of overall debt, according to the panel's report.

"HAMP's original emphasis on interest rate reduction, rather than principal reduction, benefits lenders and servicers at the expense of homeowners," the report reads. "Lenders benefit from avoiding having to write down assets on their balance sheets and from special regulatory capital adequacy treatment for HAMP modifications. Mortgage servicers benefit because a reduction in monthly payments due to an interest rate reduction reduces the servicers' income far less than an equivalent reduction in monthly payment due to a principal reduction.

"Servicers are thus far keener to reduce interest rates than principal. The structure of HAMP modifications favors lenders and servicers, but it comes at the expense of a higher redefault risk for the modifications, a risk that is borne first and foremost by the homeowner but is also felt by taxpayers funding HAMP."

"Foreclosure prevention is not just the right thing do for suffering Americans, but it is the linchpin around which all other efforts to achieve financial stability revolve," said Richard H. Neiman, New York's top bank regulator and a member of the Congressional Oversight Panel.

Over the past two months alone more than 450,000 homes have received a foreclosure notice. Slightly more than 100,000 homeowners have been helped by Treasury's anti-foreclosure efforts over the same time period.

"In the final reckoning, the goal itself seems small in comparison to the magnitude of the problem," the panel said in its report. 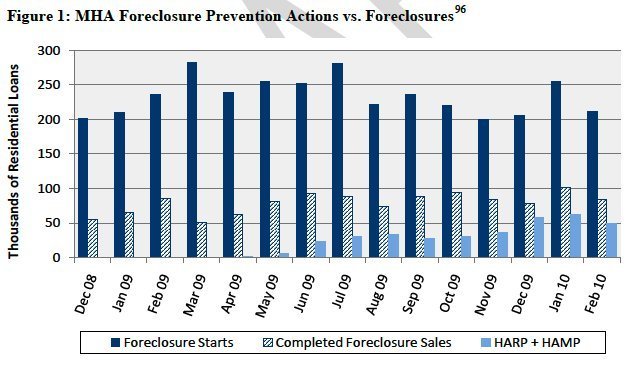