Many people are very discouraged by the current climate of anti-Muslim and anti-"other" rhetoric that so fills the airwaves. However, the larger reality is that we are progressing as anation towards a more positive appropriation of our rich religious diversity. It comes with fits and starts, albeit. But don't be fooled to think otherwise. It is the way human social progress works.

Peter Manseau disconcertingly surmised in his January 12 Washington Post Acts of Faith opinion piece that: "the nation as a whole does not agree with Obama's broadminded understanding of faith," calling Obama's effort to unite a religiously divided nation a failure.

Manseau, author of One Nation, Many Gods, is one of the foremost experts on the early and ever-present religious diversity in the United States. He knows better than most the arduous path we have taken in at first rejecting one religious and ethnic group after another in order to only later incorporate them into an ever expanding narrative of our American diversity. Eventually though, I argue that we have honored our highest ideals (and our better selves) to become what Harvard scholar Diana Eck famously dubbed the "world's most religiously diverse nation."

Obama never actually said that he could or would unite a religiously divided nation. Rather he held it up as a value to which we all should aspire. Because we are all responsible. Though he is indebted much to Clinton, Bush, and others before him to set the platform, Obama has done more than any other President to advance a positive view of our religious diversity as a unique American strength. Further, he has done this despite a steady and strong headwind of geopolitical change and pockets of exclusivist resistance uneasy with perceived threats to their eroding hegemony.

Obama is a practical optimist and change does not come easily. He knows there is a sharp gulf of difference between generations and amongst traditions in their appropriation and appreciation of religious diversity. His actions have been but pavers in a hoped for road towards a more integrated future. Because we are better together.

Let's remember some of his actions. Obama included a religiously diverse vision in the language of several key speeches, invited diverse religious groups to convene in the White House to encourage their access to government, and made one of his first acts a daring outreach to the Muslim world in a famous Cairo speech. He insisted on weaving an interreligious understanding into the DNA of diplomacy at the State Department, which came to a head in the new Office of Religion and Global Affairs. He also expanded the work and aegis of the White House Office of Faith-based and Neighborhood Partnerships, accomplishing a range of objectives outlined by the President's Advisory Council. 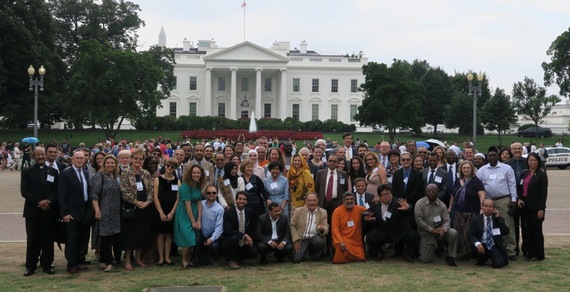 Just one of its dozens of actions is the annual convening of a President's Interfaith and Community Service Campus Challenge, which has drawn in more than 600 colleges and universities and tens of thousands of college students into interfaith community service in just five years. That is our future.

What is particularly refreshing to me is how much faster and better the voices appreciating our religious diversity tend to respond when the hiccups happen. The forces for interfaith cooperation are mobilized and forceful today. Just witness the current counter moves by those cleverly combatting anti-Muslim sentiment. Ongoing analysis by the Center for American Progress showed them how very small and vulnerable the manufacturers of Islamophobia are. When Colin Powell and Michael Bloomberg came to the defense of American Muslims it seemed unusual and was news. Today, prominent Americans of all stripes are joining ranks and calling anti-religious bigotry of whatever stripe exactly what it is, un-American. We completely dishonor what it says at the foot of our Statue of Liberty if we think otherwise.

During the past decade, interfaith cooperation as an enterprise has grown many fold. It has been recognized formally by higher education (e.g., bold actions by the American Academy of Religion and Association of Theological Schools) and is strongly growing as a respected discipline. It has been taken on as a methodological discipline by dozens of governments around the world, so that policymakers are understanding that multireligious cooperation needs to be and is an antidote to religious conflict and violent extremism. Their emerging strategies often evidence a sharp learning curve, sure, but they are trying. Finally, we enjoy several fold the number of interfaith organizations working in our communities as we did before. Interfaith cooperation is growing and becoming institutionalized and more savvy, however imperfectly.

Yes, of course, everyone is concerned about ISIS and similar groups, and we seem to read daily about an act of discrimination, exclusion, conflict or even violence tied to religion on our own soil. Conflict and controversy are what sell. Cooperation and caring gestures do not. The bigger picture, however, is much more positive. For every problem which makes the news, there are a hundred positive stories of cooperation and bridges built which do not.

Still not convinced? Let's look at examples of what is happening on two key fronts, backed by real data. One on how Muslims are viewed, which is a near constant news lead, and another on how Americans of different faiths are coming together.

First, it seems that many are concerned right now about how Muslims are part of the American fabric, or not. Yet the fact is that a strong majority of all Americans say that "American Muslims are an important part of the religious community in the U.S." Even half of all White Evangelical Protestants agree, a group which harbors some of the sharpest critics. Further, this data is based on a December 2015 Public Religion Research Institute / Religion News Service survey which it is worth noting is taken in the heat of the anti-Muslim rhetoric of the election cycle. Even more, this fact is true when very few Americans actually even know a Muslim personally, with only 8 percent of us reporting we speak to a Muslim daily and 83% of admitting we know very little or nothing about Muslim beliefs and practices. That sounds like an America on the whole that is challenging and overcoming tendencies to scapegoating, despite natural fears and lack of exposure.

You may recall that public opinion about American Muslims following 9/11 actually improved by 14 percentage points from a survey 8 months prior to a survey 2 months after. Why did favorability climb to 59%? Because President Bush very quickly and smartly came to the public defense of Muslims and Islam in the face of heinous terrorist acts, saying, for example: "The face of terror is not the true faith of Islam. That's not what Islam is all about. Islam is peace." Obama's dialogue has been consistent with, even if expanding upon, that of Bush.

So when does anti-Muslim sentiment increase? It is not in reaction to tragic acts of violence, as one might think. It gets much worse during domestic election cycles, according to the long-term pattern analysis of sentiment surveys done by Dalia Mogahed. In other words, political candidates play upon hatreds to advance their gains with specific factions, leaving a wake of damaged relations in their path for all Americans to have to heal. According to Pew Research Center and Gallup data, unfavorable feelings about Muslims are higher if you are white, older, Republican, married, less educated, and/or under- or un-exposed to the religious "other." Republican presidential candidates are disgustingly playing off this data.

Second, the American religious landscape is under immense change, but healthy interfaith activity is growing. Yes, mainline Christianity is still hemorrhaging membership. But the number of people who demonstrate spiritual and religious practices in their daily lives, even amongst the so-called "nones and nons," remains at consistently high levels. And immigration, transportation, education, communication, and intermarriage have continued to increase our religious diversity and exposure to it. This has made our workplaces friendlier, interfaith marriages more frequent, and those able and willing to engage with the religious "other" more common. For example, despite a recent backslide, the number of congregations in the US who have joined forces with other faiths to do community service together has doubled from just 8% in 2000 to 15% in 2015, according the FACTS Survey by the Hartford Institute for Religion Research at Hartford Seminary. This kind of stuff has a multiplying effect. 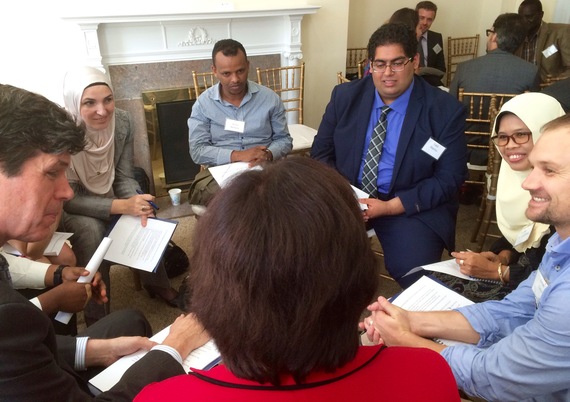 It is for these reasons and many more, that I think one cannot conclude things are getting worse. One cannot be disillusioned by election-cycle hype, highly publicized incidents of conflict, and factional resistance to religious pluralism. Statistically speaking, these voices and realities are a fractional minority and their affects will fade. More importantly, they are on the wrong side of history - past, present, and future.

In the long arc of history, we will be known as the nation who successfully held together widely different faiths and people, and it will be a mark of our strength. It already is. It is in our DNA, after all. We formed as a nation from the "wretched refuse" of other shores, as Emma Lazarus poetically observed, and we turned what seemed a weakness into an indivisible strength. Let's keep holding the torch high of our diverse nation as a beacon of progress to a hurting world.