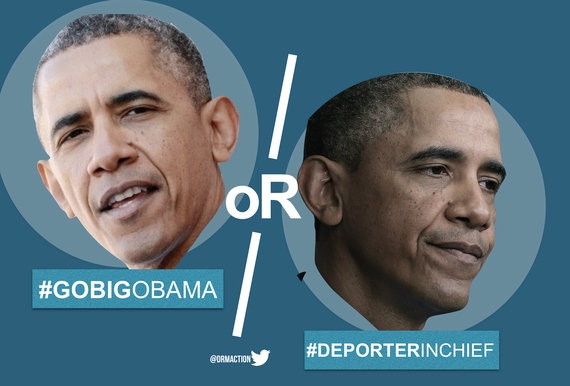 The Obama Administration is currently contemplating it's next move on immigration. At the same time Republicans are doing everything they can to signal irrational resistance to doing anything on the issue, we are approaching the end of the summer, during which Obama said he would be considering a unilateral immigration reform. As a legacy, however, anything Obama does will exist next to the 2 million deportations his enforcement has already carried out, more than any previous president.

In the world of social media, the current question of Obama's immigration legacy can be summed up as this: Which will be the dominant tag, #DeporterInChief, or #GoBigObama?

#DeporterInChief exploded overnight when the leader of the National Council of La Raza, the last large progressive immigration organization supporting the White House, dubbed Obama the "Deporter in Chief." Similar to the National Day Laborers Organization Newtwork's (NDLON) #Not1More, this tapped into the frustration of an immigrant rights movement that often feels marginalized by the Administration. Much of this is due to the fact that often, it seems Obama's enforcement has been done to please the nay-sayers who seemingly are incapable of being pleased.

#GoBigObama, first used with limited success to push a global warming message, was originally used in an immigration context to tie together questions on Twitter during a congressional panel hosted by Dream Action Coalition in July. It has since gained momentum, and been used by many different organizations to push Obama to "go big." Which brings us to an interesting question: What would going big look like?

For starters, the obvious low-hanging fruit is expanding Deferred Action for Childhood Arrivals (DACA). The authority for this comes from deferred action, a power of the executive branch and from Congress's grant of general authority to the Department of Homeland Security to administer and enforce immigration law.

The deferred action program of DACA did not include, however, Jose Antonio Vargas, a 31-year-old undocumented immigrant with a Pulitzer Prize, a movie (Documented) and a new campaign to tell his story, #1of11million. Also too old for DACA are the parents of DREAMers, who themselves have typically established roots in the country for years if not decades to raise children who would qualify for DACA, in addition to older siblings. The limitations on DACA could be rolled back or eliminated, offering status potentially to millions.

Deferred action, however, is only one of many different avenues Obama has constitutional authority for: there's also deferred enforced departure, derived from the President's authority to conduct foreign relations and enforce immigration laws; Temporary protected status, authorized by Congress in 1990 to cover entire qualifying nations; parole, from the Immigration and Nationality Act and stay of deportation, to name a few. Essentially, the quote that best sums up Presidential authority in the context of immigration is a Supreme Court quote from Heckler v. Chaney: "an agency's decision not to prosecute or enforce, whether through civil or criminal process, is a decision generally committed to an agency's absolute discretion."

The President is the head of U.S. agencies, such as those responsible for enforcing immigration. "Absolute discretion" has been backed up in case after case, becoming important U.S. legal precedent. While the law affords the President many different options and broad authority to carry them out, Obama may feel more constrained by politics.

Looking toward political history, however, executive orders have been a legal tradition in the country, part of the balance of powers and have often been issued on immigration. The claims from many in the GOP on the constitutionality of executive orders on immigration are typically as hyperbolic and wrong as the "King Obama" quote from Steve King, who openly admitted to feeling ignorant when there are lawyers in the room in the same conversation.

For recent examples of executive orders on immigration that were not deemed unconstitutional, there was President Bush Sr.'s order in 1990 protecting Chinese students who feared persecution if returned to China; his delay of deportation for hundreds of Kuwaiti residents for four years in response to the occupation of Kuwait and ordered the automatic repatriation for Haitians coming to the U.S., including those with "potentially valid claim to refugee status." Clinton granted an 18-month extension of the deferred enforcement departure program, allowing 200,000 Salvadorans to live and work in the U.S. and suspended deportations to hurricane-ravaged countries. Bush Jr. gave temporary protected status to as many as 150,000 Salvadorans and ordered expedited naturalization for green card holders in the military.

Looking a bit further back on recent presidential history is the quote "I believe in the idea of amnesty for those who have put down roots and live here, even though some time back they may have entered illegally," said by President Reagan, the man who would offer status to millions of immigrants. He is the most revered in contemporary GOP politics, yet today would be run out of town by Ted Cruz and Steve King for talking about any immigration reform, let alone using the word "amnesty."

We currently have the least productive Congress on record, a more thoroughly broken immigration system, a human rights crisis on the border and more undocumented immigrants in the country than before. Anything Obama does would necessarily have to be bigger because Obama has more to compensate for more congressional obstruction and a larger problem than previous Presidents had to deal with.

Right now, the path is clear for Obama to take bold action and offer status to millions. The opposition has never been less rational than today's GOP is on immigration, and even Steve King is struggling to explain to DREAMers with DACA like Erika Andiola why he believes they should be deported, as per the recent GOP-controlled House vote. While the same people who have been howling at everything Obama has done will continue to howl regardless of the actions taken, the time to ignore the crazies completely has come as they have painted themselves as far into a corner as possible.

Will the Administration be held back by the same Steve Kings and Michelle Bachmanns who shut down the government threatening impeachment in Congress, or will Obama offer enough of an administrative fix to make the system as workable as possible, offer relief to millions of deserving immigrants and redeem himself to the Latino and immigrant community? Will the relief even be close to the scale of his administration's deportations? Only time will tell, but either way, the hashtag wars continue, and Obama has much to make up for.