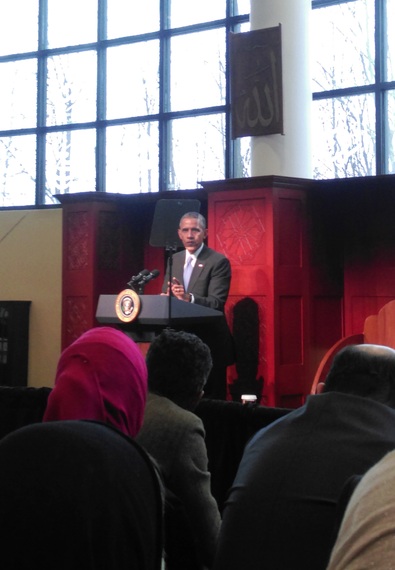 I will admit I was a bit skeptical when I received the invitation to hear President Obama speak for the first time at a U.S. mosque. What would he say? Would he again tell Muslims that they were responsible for rooting out extremism, as he did after the San Bernardino shooting? Or turn it into a political opportunity to bash Republicans under the guise of denouncing Islamophobia?

To my pleasant surprise, the President did neither. In fact, he began with two words, which he said Muslim Americans don't hear enough: "thank you."

That moment set the tone for the rest of the speech, in which not only did he thank Muslims and Muslim Americans for their significant contributions to the world, but he also quoted Quranic verses and Prophetic sayings (Hadith), and assured Muslims that they are just as American as everyone else.

It was a powerful pushback to the anti-Muslim rhetoric that has increased at an alarming rate during his Presidency. It was also a validation that Muslim communities are hurting from the heightened amount of physical violence they have experienced, especially after the Paris attacks.

"You fit in here," Obama said, specifically to the youth watching in the audience and via live stream. "You don't have to choose...You are Muslim AND American."

President Obama's focus on youth was purposeful and timely among increasing concerns about youth radicalization. Terrorist groups like ISIS prey on young individuals who feel marginalized by society and recruit them by providing a sense of belonging and empowerment. By telling Muslim children that they were welcome in the U.S., he was countering that extremist narrative and hopefully, lessening that attraction to join.

It was also significant that he took the opportunity to refute the popular belief that ISIS is solely a Muslim problem.

"It can't be just a burden on the Muslim community," President Obama said. "We all have responsibilities."

These words generated a largely positive reaction inside the mosque, but one can't help but wonder what policy implications, if any, the speech will have outside. The Obama Administration has been widely criticized by Muslim Americans for policies on drone warfare, police surveillance, Guantanamo, support of the Israeli military, and Muslim-centric countering violent extremism programs. If Obama wants to truly reach Muslim Americans, beyond denouncing anti-Muslim bigotry and hate crimes, he will have to address these policies as well as acknowledge the role the U.S. plays in conflicts in Muslim countries abroad.

There is also the issue of how late into his presidency the mosque visit occurred. Despite calls from Muslim American advocates for years, President Obama waited until his final year to carry out the request. Was it because he was trying to distance himself from the Muslim community for the sake of his critics, who claimed he was Muslim (as if that was a bad thing)? Or did he consider it a victory lap during the end of his term (without the threat of reelection), like the successful Iran nuclear deal?

The White House attributed the timing of the visit to anti-Muslim rhetoric currently being spewed by Republican candidates. However, there were plenty of opportunities prior to this election season for President Obama to express his solidarity with Muslim Americans through a mosque visit. The Chapel Hill shootings, a hate crime that resulted in the death of three young Muslim Americans, the Arizona mosque overtaken by armed rebels, and the "Ground Zero Mosque" controversy were all appropriate times for Obama to make a statement.

But better late than never, right? As a Muslim American, I appreciated President Obama's gesture, his affirmation of our "Americanness", and his recognition of our community's concerns. I just hope that the words weren't empty ones, and look forward to seeing if they create change during the final year of his Presidency.

Wardah Khalid is a writer, speaker, and analyst on Middle East policy and Islam in America. Follow her on Twitter @YAmericanMuslim and see more of her work at www.wardahkhalid.com