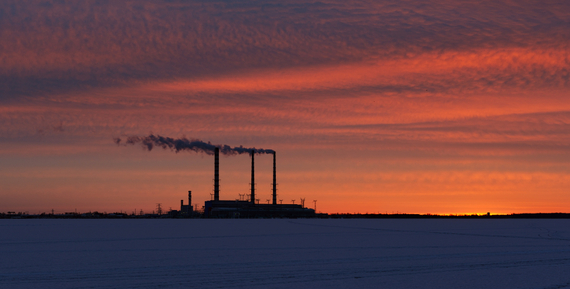 No real surprises here. Through a series of leaks and pre-announcements, we all knew before yesterday that President Obama would be proposing a new rule [pdf] for the Environmental Protection Agency to regulate carbon emissions from existing power plants.

The specifics of the rule involve a flexible approach with state-specific carbon goals that take into account each state's current fuel mix. All the reductions will not have to come from the power plants themselves. Instead, states can meet the federally mandated reductions using a variety of mechanisms including improving efficiency, cutting emissions from sources other than power plants, and working with other states (for example, by establishing a multi-state cap-and-trade pollution reduction program). And the specific goals? "For each state, the EPA is proposing an interim goal for the phase-in period from 2020 to 2029 and the final goal that applies beginning in 2030." There’s also an overall national goal of cutting 30 percent by 2030 compared to 2005 levels.

On the one hand, the rule comes none too soon. Obama has less than two years to make good on his pledge to address climate change in a meaningful way. Even under the most optimistic of scenarios -- the administration "expects to finalize this rulemaking by June 2015″ with state plans due a year later -- it will be a horse race to finalize this draft rule before he leaves office.

And then there are the U.S. emissions themselves. For much of his presidency, U.S. carbon emissions have been on a slow decline. Albeit the decline was largely the result of a confluence of events (i.e., the Great Recession and the sudden glut of cheap, "fracked" natural gas), but the reductions were nevertheless something the president and his administration could point to [pdf] with pride. And we Americans could as well.

Despite having been excoriated for years by environmentalists for not ratifying the Kyoto Protocol, the United States could claim an almost 10 percent drop in energy-related emissions between 2008 and 2012 -- a reduction to levels not seen since the 1990s. But with our economy turning around, the downward trend has turned too. Emissions in 2013 increased by more than 2 percent. And more of the same is projected for 2014. But Obama's carbon rule, if implemented, should provide a countervailing force on rising emissions -- and almost certainly make the country a leader rather than a laggard on climate-change action on the world stage.

Monday's announcement is bold and game-changing; it's a huge stroke to address climate change but it hasn't come out of a vacuum. Since last fall, there has been a drumbeat (some might even say an orchestrated drumbeat) of reports, pronouncements, and events designed to raise the issue of climate change and its dangers from the graveyard of failed environmental initiatives.

One has to go back to 2009 to remember a time when the issue of climate change was receiving this much attention from policy makers. The peak most likely came that June when the House had just passed the Waxman-Markey American Clean Energy and Security Act, which would establish a comprehensive and nationwide cap-and-trade system on carbon emissions. With a Democratic majority in the Senate and Obama's pledge, passage into law in 2009 seemed certain.

Pretty incredible in its own right, but there was even more in the offing. That December the world's nations met in Copenhagen for the 15th meeting of the Conference of the Parties of the UN Framework Convention on Climate Change. Expectations were high that a new treaty binding nations to specific emission reductions would be hammered out and by the beginning of 2010 the United States and the world would have charted a course to avoid dangerous climate change.

Things didn’t quite go as might have been expected. The Senate, as the Senate is wont to do, got bogged down on a climate bill. Then there was "climategate" -- the scandal involving hacked e-mails between climate scientists and reporters that sent climate deniers into an apoplectic tizzy over misperceived reveals of a "hoax" -- followed by "Snowmageddon," the brutal East Coast snowstorm that caused many to myopically question whether there was such a thing as global warming.

And on the international front there were the climate talks in Copenhagen with a lot of hot air and little action of global warming. Total humiliation was averted by President Obama's last-minute intervention that yielded the Copenhagen Accord [pdf], which produced for the most part inadequate, nonbinding pledges from various nations to reduce their greenhouse gas emissions.

It was a debacle. Instead of a new course to avoid dangerous climate change, it was the same old, do-nothing course, and climate change got relegated to the back burner (if any burner at all) in public policy circles.

Stepping to the Beat of a Different Drummer

But with a series of reports released one after the other in the last nine months or so, the tide may be turning. It began with the fall 2013 release of the the latest [pdf] report by the Intergovernmental Panel on Climate Change with its most definitive conclusion [pdf] yet that "[i]t is extremely likely that human influence has been the dominant cause of the observed warming since the mid-20th century."

That was followed by:

That was the drumbeat of reports. There has also been a growing planetary drumbeat -- a drumbeat of extreme weather events. They may or may not be related to global warming, but they have made an impression. Here in the United States we've had extreme winter weather, the devastating California drought, and now the early arrival of a string of "fast-moving wildfires" that threaten another destructive wildfire season.

It is in the context of those drumbeats, that we have Obama's proposal to curb carbon emissions from power plants. A seemingly appropriate conclusion to the momentum created by the reports and the weather reports. But is it the conclusion or just another step in an even grander march?

This September, at the invitation of United Nations Secretary General Ban-Ki Moon, the leaders of the world will be meeting in New York City to "[i]nnovate, scale-up, cooperate and deliver concrete action that will close the emissions gap and put us on track for an ambitious legal agreement through the UNFCCC process." And next year the Conference of the Parties will reconvene -- this time in Paris -- with the aim of agreeing to a new treaty on climate change.

Is that where the march is leading? Could it be that Obama's announcement is a step, albeit a huge one, that leads to the biggest step of them all -- a new international agreement on climate change? It's kind of a fife and drum question. It could be a pipe dream or it could be drumroll.