WASHINGTON -- Just a week after the conclusion of the Democratic convention, most polls now show a boost for President Barack Obama. But the big question is whether Obama's bigger lead will persist or whether it will turn out to be a temporary polling "bump."

For the moment, most polls continue to show a post-convention Obama bounce. A new Fox News survey released on Wednesday shows Obama leading Republican nominee Mitt Romney by 5 percentage points (48 to 43 percent), and the latest Gallup Daily tracking poll, based on interviews conducted over the past week, shows Obama expanding his lead to 7 points (50 to 43 percent).

Meanwhile, national surveys conducted by seven more pollsters over the past week give Obama leads varying from 1 to 6 percentage points, and a new poll in Michigan published on Wednesday and sponsored by the Detroit Free Press and local television station WXYZ-TV showed Obama expanding his lead there from 3 to 10 percentage points since late August.

The latest update of the poll-tracking model created for HuffPost Pollster by political scientist Simon Jackman, which controls for the consistent "house effect" differences among pollsters, shows Obama's lead over Romney leveling off at 4.5 percentage points (48.7 percent to 44.2 percent). 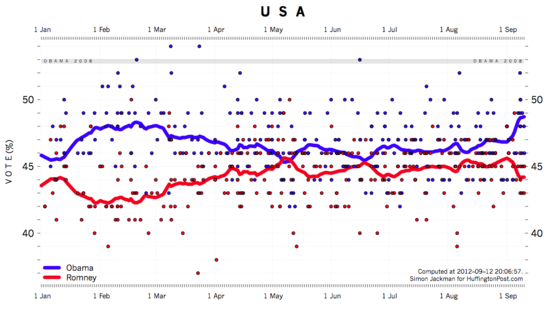 But as good as the news is for Obama, it is worth remembering that at this point in the 2008 campaign, roughly a week after the end of the Republican convention, then-Republican nominee John McCain's lead over Obama peaked and began to subside. The Republican convention ended Sept. 4, and McCain, who had been trailing in most public polls during the summer, got a modest bounce from both the convention and his selection of vice presidential running mate Sarah Palin. 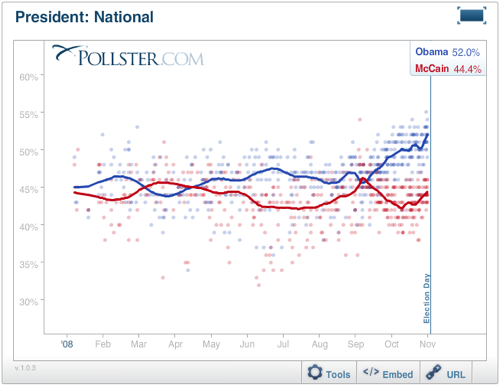 If the timing of the McCain fade repeated this year for Obama, there would be evidence over the next day or two. However, a similarly timed decline in Obama's bump may take longer to appear, since both the Gallup Daily and Ipsos tracking polls are reporting data combined for a full week, rather than just three days.

The Rasmussen Reports automated telephone poll, which continues to report three-day rolling averages, already tracked a decline in Obama's post-convention bump. Its most recent results, published on Thursday morning, show Romney moving one point ahead of Obama (47 to 46 percent).

Of course, the polling shifts of September 2008 were influenced by more than the conventions, and ongoing events, including the violence in Libya, may have a similar influence over the polling trends this year.

It is important to remember, however, that McCain's polling bump had largely faded before "black Monday," Sept. 15, 2008, the day that financial services firm Lehman Brothers filed for bankruptcy, the stock market fell more than 500 points and McCain infamously declared that "the fundamentals of our economy are strong."

So McCain's post-convention lead may have been just a temporary and fleeting bump in the polls, but other events may have helped hasten the decline. The post-convention week included Sarah Palin's Sept. 11 interview with ABC news correspondent Charles Gibson, in which she speculated about the possibility of invading Russia and had trouble answering a question about the "Bush Doctrine."

The confluence of events in 2008 shows that while the party conventions are important, they do not occur in a vacuum. The tracking polls to date have not yet measured reactions to the ongoing violence in Libya, and Romney's attacks of Obama and the diplomats in the Middle East. Either way, poll results released over the next few days will provide greater clarity.