A new CBS poll says it all. The American public knows the final passage of the health care bill was more about politics than policy. Stupak's dramatic grandstanding that brought an executive order so he could save face was the finale after the White House final pitch to "save Obama's presidency" by not handing Pres. Obama a domestic legislative failure on an issue Democrats had taken over a year to pass. Meanwhile, everyone missed just how conservative the Obama-Pelosi Democratic bill actually is. That Democrats ignored the people wanted a public option, doing instead what they wanted, revealed how rotten politics has become, as well as how toothless progressives proved to be in the end, especially the pro-choice caucus led by Rep. DeGrette. From the CBS poll:

When you look at the health care bill Obama, Pelosi and Democrats ended up passing, the politics over policy reality becomes even more apparent.

But it's no wonder insurance company stocks went soaring.

Before the vote, Robert Reich demanded that House Democrats pass the bill. Yesterday he said no one should be confused that it's progressive in the least.

Medicare built on Franklin D. Roosevelt's New Deal notion of government as insurer, with citizens making payments to government, and government paying out benefits. That was the central idea of Social Security, and Medicare piggybacked on Social Security.

Obama's legislation comes from an alternative idea, begun under the Eisenhower administration and developed under Nixon, of a market for health care based on private insurers and employers. [...] Obama applies Nixon's idea and takes it a step further by requiring all Americans to carry health insurance, and giving subsidies to those who need it.

As for the appalling way Democrats handled women's rights, Planned Parenthood simply shrugged, while NARAL and NOW sent out strong condemnation of the Obama-Stupak final deal, complete with executive order. But where were these women's groups when Stupak was rising? Expect a fundraising letter in your email inbox. Their ineptitude to manage any meaningful campaign to thwart or at least challenge the conservative Democratic minority is one reason I don't belong to any of these groups. 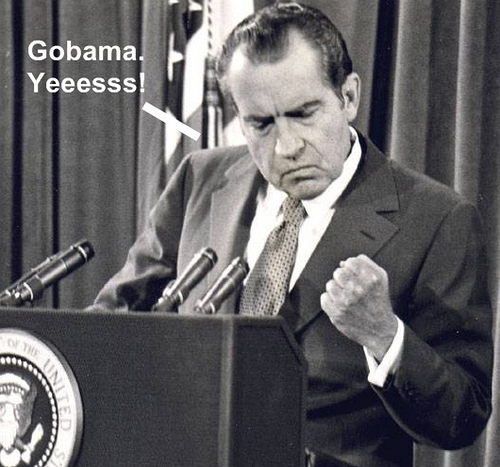 The whole health care affair has made leading conservative editorial pages, written by Bill Kristol and the editors of NRO, crack under the strain, while forgetting their own history. Pushing repeal of the the health care bill, as did Rush Limbaugh, it doesn't seem Republicans are living in reality. Megan McArdle's "tyranny of the majority" is one of the more humorous responses to Speaker Pelosi's win, though I concur on her assessment of America's "toxic politics."

EJ Dionne, one of the biggest insider Dems, but also one of the only ones honest enough to write it, said it through a title on Friday: Why Democrats Are Fighting for a Republican Health Plan. A snippet is below:

Yes, Democrats have rallied behind a bill that Republicans--or at least large numbers of them--should love. It is built on a series of principles that Republicans espoused for years.

Republicans have said that they do not want to destroy the private insurance market. This bill not only preserves that market but strengthens it by bringing in millions of new customers. The plan before Congress does not call for a government "takeover" of health care. It provides subsidies so more people can buy private insurance.

Republicans always say they are against "socialized medicine." Not only is this bill nothing like a "single-payer" health system along Canadian or British lines. It doesn't even include the "public option" that would have allowed people voluntarily to buy their insurance from the government.

But there is a simpler conclusion: Democrats, including President Obama, are so anxious to get everyone health insurance that they are more than willing to try a market-based system and hope it works. It's a shame the Republicans can no longer take "yes" for an answer.

When you have Speaker Pelosi's office inviting only the boys, so called "progressives" who are insider Democrats whose only goal it is to prop up the presidency instead of focusing on strong policy, the current health care bill is what you get. Even when you go beyond the issue that Democrats willingly eroded women's rights, the fact that Democrats didn't even try to push for a public option reveals the fundamental failure of Democrats, because they ignored what the majority of the American people want.

The conservative minority was able to beat them and target women's rights in the bill by simply sticking together. The larger block of progressives who wanted a public option simply folded, as did the pro-choice caucus. Relegating the progressive brand to that of wimps, there is simply no way these people and their enablers in new media will ever best the likes of Rahm Emanuel. The reality is that congressional progressives failed utterly.

From throwing the American people into a system without any choice, providing private insurance companies with new customers, to using women's rights to get it done while progressive Democrats enabled it to happen, what Democrats have done is produce a Republican health care bill that Richard Nixon would have loved.

From Steve Pearlstein back in August 2009:

It was back in 1971 and President Nixon was concerned that he would once again have to face a Kennedy in the next year's election -- in this case a Kennedy with a proposal to extend health care to all Americans. Feeling the need to offer an alternative, Nixon asked Congress to require for the first time that all companies provide a health plan for their employees, with federal subsidies for low-income workers. Nixon was particularly intrigued by a new idea called health maintenance organizations, which held the promise of providing high-quality care at lower prices by relying on salaried physicians to manage and coordinate patient care.

At first, Kennedy rejected Nixon's proposal as nothing more than a bonanza for the insurance industry that would create a two-class system of health care in America. But after Nixon won reelection, Kennedy began a series of secret negotiations with the White House that almost led to a public agreement. In the end, Nixon backed out after receiving pressure from small-business owners and the American Medical Association. And Kennedy himself decided to back off after receiving heavy pressure from labor leaders, who urged him to hold out for a single-payer system once Democrats recaptured the White House in the wake of the Watergate scandal.

But it should tell you how far the country has moved to the right that the various proposals put forward by a Democratic president and Congress bear an eerie resemblance to the deal cooked up between Kennedy and Nixon, while Nixon's political heirs vilify it as nothing less than a socialist plot. [...]

Yes, Nixon would have loved Obama's Republican health care bill. Well, except maybe for the taxes.

... "even socialists like myself know you don't raise taxes in a recession." - Lawrence O'Donnell, via Joe Scarborough on Twitter

I now return Democrats and progressives to cheerleading, art provided by the White House and a fancy signing ceremony.