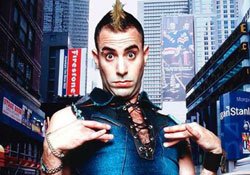 In what many have perceived as a reversal, president Obama upheld the controversial "don't ask, don't tell" policy by refusing to state his opinion of the film "Bruno." The President, who attended a screening in Dupont Circle on Saturday night, was asked his opinion of the film this morning by former presidential correspondent and current member of the White House Press Corps Helen Thomas.

"Don't ask me that, Helen," stated an uncharacteristically flustered Obama. "Look, I'm committed to opening up the dialogue about this and, yes, changing my current policy, but now is not the time to address this."

Obama has been criticized for flip-flopping on statements he made during the campaign, most notably during the third presidential debate when commentator Bob Schieffer asked: "Tell us, without equivocation, what is your opinion of the film "Borat?"

"Very nice! Very nice! High five!" said Obama mimicking Borat's catchphrase, in what has since become an iconic moment of the the 2008 campaign.

"I can't speak for Senator McCain," Obama told Schieffer who was visibly impressed with the impersonation, "But I'm a supporter of Borat, Ali G, Bruno and all members of the Sacha Baron Cohen community."

Many activists contend that given the success of "Bruno," the time is now for the president to speak out in support of non-traditional films such as the ones made by Cohen.

"Obama has no problem admitting that he enjoyed traditional family films like 'Sisterhood of the Traveling Pants 2' and 'Transformers,'" said frequent White House critic and activist Glenn Stevens.

"He was a supporter of Sacha Baron Cohen's humor during the campaign, so what happened?" asks Stevens. "His silence on this issue is a betrayal."

Others insist that Obama's silence is merely another example of the president's signature pragmatism.

"He's smart enough to know that he can't force his opinion of the film down peoples' throats," said Andrea Shrum on NBC's "Meet the Press."

Still, with polls suggesting that the president's approval ratings have begun to drop slightly, there are indications that he's begun to listen to his critics. Just hours after the president's response to the film began to stir controversy, Obama issued a statement about "Bruno" from the White House Rose Garden.

"I know that many believe my analysis of this film has not come fast enough, and I understand that. It's not for me to tell you to be patient, any more than it was for others to counsel patience to heroes from another era who fought to defy the consensus that 'Forrest Gump' was a good movie," said Obama.

Throughout the address, Obama empathized with proponents of Sacha Baron Cohen while reassuring those Americans who are more comfortable with traditional family fare.

"I'm not willing to go on the record giving the film a yay or nay," stated the president, "But I will say this: there were some flaws that deeply troubled me, but other aspects of the film certainly worked. Still, when you use the lens of history and compare it to films that came out just months ago, films like 'Paul Blart: Mall Cop' and 'The Pink Panther 2', I think we've shown a lot of progress."