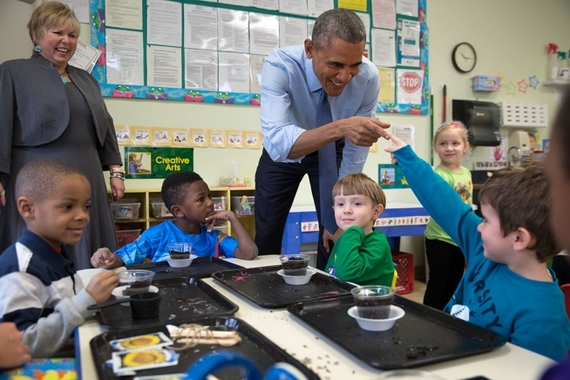 It has been fascinating to observe public and pundit reaction to Obama's State of the Union address. The president clearly relished delivering this speech - and the agenda he outlined for domestic policy in particular. His enthusiasm and authentic delight reminded me of Obama's 2008 campaign for president - we haven't seen much like it since he won office.

The enjoyment he took in boldly proclaiming an unabashedly progressive agenda led some to frame this as a "drop the mic" moment of extreme comeuppance - throwing his achievements in the faces of a Congress made up of many who have lived solely to obstruct any of Obama's plans.

Others viewed this as a legitimate go-for-broke moon shot, akin to a stratospheric opening bid in a deal that you know will land in far more pedestrian territory.

And of course, many conservatives simply see this as confirmation of Obama as a full-throated tax-and-spend liberal who is bent on using his last two years in office to do his best to turn the United States into France or Norway.

But after digesting his speech for a few days, I have a different view. I believe Obama used this SOTU to begin playing a long, long game for change he believes will benefit the country. I believe people will look back and realize that this speech was actually his first post-presidential speech - that he very strategically delivered while still in office. In my view, this particular SOTU kicked off what I imagine will be a life-long campaign to shape the country according to his values, and he's decided to start building momentum now, for a life-long campaign for change once he leaves the White House.

Here's why I believe this:

1) Obama's a student of the history of the American Dream. He believes deeply in the dream, and as an exemplar of American opportunity, he prizes it deeply. Obama views the American Dream as partly derived by an economic ethos and infrastructure that rewards initiative, hard work and innovation. But he also views the dream as a series of high watermarks that denote normative steps forward for the nation - such as allowing women and non-whites to vote and own land, and our post-WWII GI Bill investments in housing and education. His proposals on higher minimum wages, childcare and investment in higher education through community college support, reflect new watermarks he believes are required to help the American Dream live and grow.

2) Obama is compelled by data. And much of the evidence points to an American Dream that is waning toward mythological institutions like Santa Claus and the Tooth Fairy. Colleagues at the Pew Research Center, relying on research from the right and left, tell this story compellingly through data. Politicians have been lagging the nation badly in expressing some skepticism on the economic prospects of ordinary Americans. But this is changing. Candidates and incumbents have spent enough time with struggling constituents to finally realize that they must discuss the challenges around mobility to actually connect with ordinary Americans. Example A? Mitt Romney, Mr. 47% himself, raging against inequality on the stump as he kicks off his next possible run for the White House. Obama sees this wave forming and wants to ride it toward major policy change.

3) As the nation's first African-American president, Obama is a living, breathing moon shot. Don't forget that his middle name is Hussein, as in Saddam Hussein (remember him?). Oh yes, and his first name rhymes with Osama. But through Obama's journey to the White House, we all saw that sometimes moon shots actually work in DC. Obama has learned these lessons the hard way and they'll be invaluable for him in pushing a moon-shot agenda.

Obama will leave the White House a healthy, vibrant middle-aged guy with decades of work ahead of him. At his core, he's a campaigner and an organizer, and he'll want to embrace his opportunity to shape the nation and the world as an ex-president. Leaving the White House will also finally allow Michelle Obama to be a true partner to the president in driving an agenda for social and economic change. They'll build on the examples of former presidents Carter and Clinton in using their status to advance left-leaning change. But they'll set themselves apart by shooting for the moon on a regular basis.

About Ben Mangan: Ben is Executive Director of the Center for Nonprofit and Public Leadership, and a lecturer at UC Berkeley's Haas School of Business. He is the former CEO and cofounder of EARN, and a blogger for the Huffington Post.

Follow Ben at LinkedIn and Twitter for provocative, truth telling about leadership, social enterprise, the social sector and doing good in the world.