Yesterday, I posted an item that criticized President Barack Obama for failing to take the sorts of actions that matched his answer to Time's Michael Scherer's state secrets question Wednesday night. In fact, he's taken the opposite action by expanding on Bush policies he termed "overbroad" and failing to discern genuine security concerns from false ones. Plenty of readers disagreed with my bottom line, that Obama's answer was not geniune. I hold to my analysis! But, emailer Ron Carey challenged my contentions in a thoughtful and engaging way, so I figured, why not air a reasoned countering opinion? Here goes:

Obama has stated more than a few times that the Bush era secrecy claims were outrageous - States Secrets were never meant to be used in this manner. Obama is a constitutional scholar and knows full well the ramifications of a sovereign immunity claim. His stated position is a polar opposite from this claim, so how can his administration make this patently ridiculous argument?

If Obama was only interested in making sure that these claims weren't available under his watch, he'd simply not use them. I think he has a longer-term view of the situation. He saw what Bush got away with. I think he wants to make sure future administrations don't have this club in their bag when he's gone. So how can he do this?

Well, he could go to Congress and demand legislation that disallows this use, but the Dems in Congress are spineless and he'd wind up with a half-a-loaf compromise that wouldn't have any teeth.

Or, wait a minute, he already has a number of these cases traveling through the court system now. What if he just let them proceed? The courts would dismiss the Bush secrecy claims for sure, and he'd have a precedent that future administrations would need to deal with if they wanted to repeat the same mistakes.

But what if the court rules in favor of the secrecy claims? That would screw the pooch but good... Hmmm... Well, we'll have to make sure that doesn't happen. How? Let's just take Bush's secrecy claims to their preposterous conclusion. We'll make them so outrageous, no court in the land could possibly uphold them. We get our precedent for future administrations and avoid the nonsense that comes with legislating this out of existance.

I've made this case to a number of people from both sides of the political spectrum. I have been roundly ridiculed for the hypothesis. Other progressives called it "11th dimensional chess" - don't ask me, I don't know what that means. They considered it crazy. But is it, really? I mean, it isn't even regular chess. It isn't even complicated. Other bloggers, including one ex-constitutional lawyer I know, thought it was crazy to think that Obama's administration might present a case disingenuously to serve an ulterior motive. He didn't seem to think that lawyers do that kind of thing.

But they do it every day. Every time a lawyer blames someone else for the crime his client is accused of, he's forwarding a case he doesn't really believe to serve his end goal. So, are we to believe that Obama is incapable of such a move? Or are we supposed to be so cynical, so skeptical, that we just automatically assume the worst of our elected officials?

I like to think that I'm not reflexively "assuming the worst of anyone," just judging the merits of actions already taken. If we all can accept that, though, I think this matter would make for some lively debate in the comments, so I invite people to chew on the matter.

FYI: I tried to clarify for Ron, by the way, what the reference to "11th dimensional chess" meant. It is, I believe, a Star Trek reference! The crew of the Enterprise was often depicted playing a chess-like game that was three dimensions, and the idea was, "Damn, lookit how crazy ADVANCED those dudes are, playing SUPER SPACE CHESS!" And so, whenever you argue that Obama is playing some political jujitsu, you hear someone saying, "OH yeah, eleventh-dimensional chess." 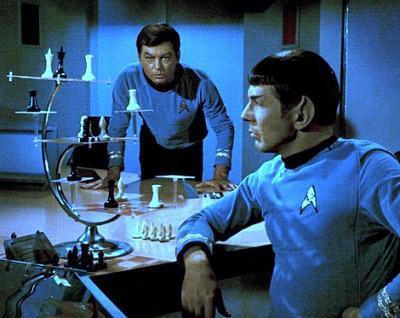 I can't wait to see what J.J. Abrams does with that!