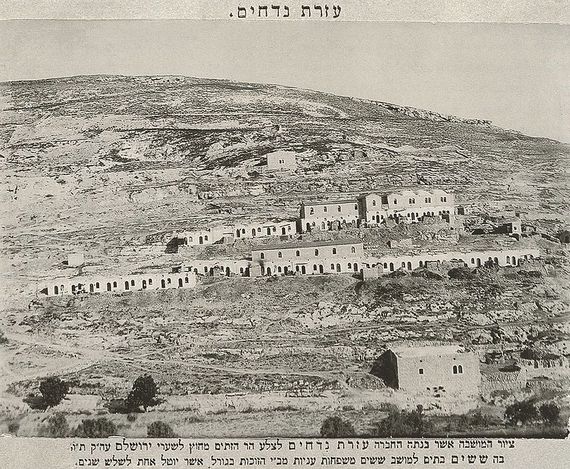 60 houses built by the Ezrat Niddachim charitable organisation in Silwan, Jerusalem, for poor Yemenite Jews in the 1880s.

An Arab resident of Silwan, East Jerusalem, was knifed to death, Thursday evening, in what some neighbors say was retaliation for selling an apartment to Jews. Several other Arabs suspected of real estate dealings with Jews are in hiding. Fadi Maragha, a Fatah representative in Silwan, said that the Arabs who sold their property to Jews should die. The Palestinian Authority considers the sale of property to Jews "high treason" -- a crime that is punishable with the death penalty. The mufti of Jerusalem, Sheikh Muhammad Ahmad Hussein, said that Jewish residents who move into Silwan are committing a "criminal act" that furthered the "Judaization" of Jerusalem.

The latest escalation began Tuesday, October 7th, after several Jewish families moved into apartments in Silwan. The homes were all legally purchased by Kendall Finances, a private company funded primarily by American investors.

The Obama administration does not dispute the fact that the land was legally purchased or that the previous Palestinian owners were paid above the market value. Yet the White House, concerned that an influx of Jews in East Jerusalem will make it harder to divide in a final status agreement, strongly criticized the move.

"The US condemns the recent occupation of residential buildings in the neighborhood of Silwan by people whose agenda provokes tensions," Josh Earnest said. "It only serves to escalate tensions."

This rash and unjust condemnation has no place in a discussion of the legal purchase of properties in Israel. To address the subject of occupation in the framework of Silwan is not only inappropriate, it also can be misunderstood as legitimizing the persecution and murder of Arabs that sell land to Jews. The White House will be partially responsible for any harm that may befall Silwan Arabs who sold their homes to Jews. The statement also provokes further violence against Jews who live in East Jerusalem.

I'm one of the few rabbis within NY's orthodox Jewish community that publicly supported President Obama in his bid for reelection, and for that reason I cannot remain silent regarding the president's untenable position.

Israel is the only democracy in the Middle East. Its democratic laws protect and allow Arabs to buy land anywhere in Israel including within the 1967 borders, which the entire International community agrees will remain part of Israel. There is no justification for forbidding Jews to live or buy land anywhere in the Jewish state.

The Arab demand that any future Palestinian state be "free of Jews" just confirms the sad reality that the Palestinian leadership is not yet ready to accept the basic ethical values needed to govern a state.